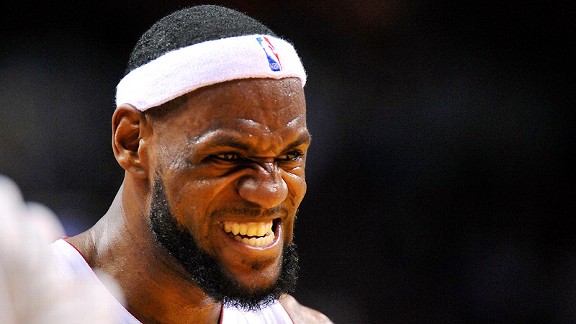 With Dwyane Wade out, LeBron James had a monster game reminiscent of his days in Cleveland.

MIAMI -- LeBron James is consciously attempting to “get back to himself” this season, to use the words he’s been repeating since training camp.

What James wants, even if he hasn’t quite put it in such terms, is for things generally to be like they were when he was with the Cleveland Cavaliers -- only with the added benefit of All-Star teammates and warm weather in the winter. That’s a prickly, if understandable, goal that is sure to be tested throughout the season.

James has, indeed, been more light-hearted and outwardly jovial thus far, backing up his 2011-12 plan on the persona front. On Wednesday night, he got the chance to also throw his game back two years. His enjoyment and comfort level in doing so was boldly visible in the results.

With Dwyane Wade sitting out a meeting with the upstart Indiana Pacers with a sore foot, James morphed right back into the mode that made him a two-time most valuable player with the Cavs.

For the heavy majority of the game the ball was in James' hands as he took over as the full-time facilitator in the 118-83 blowout victory to improve the Miami Heat to 6-1. James racked up 33 points with 13 assists and eight rebounds.

He did it joyously, whipping backhanded passes to teammates while swinging his hips and thrusting back his shoulders after drawing shooting foul after shooting foul. He glared over at his bench after various exploits. It was full-on James swagger mode, the sort of stuff that was rather rare last season.

Even after he turned his ankle by landing on Paul George inadvertently in the third quarter -- James rolled around on the deck for a while before getting up and not even leaving the game, which some might say also was routine in his Cleveland days -- it kept looking easy.

“I was able to find my teammates and I was also get myself going, I didn’t a little bit of both,” James said. “It was a well-balanced game for me.”

And he did it at both ends, smothering Pacers small forward Danny Granger and contributing to a horrid 2-of-13 shooting night for the small forward.

“LeBron James, the best defensive player in the world, was on him,” Pacers coach Frank Vogel said to explain Granger’s bad night.

That was an embellishment but it did signal the sort of game James played out there. It wasn’t that he did anything special, or something that he’s not ordinarily capable of. It was the comfort that he showed doing it on a night when not having Wade could’ve added extra pressure. With the Pacers 4-1 overall coming into the game and the Heat coming off a loss, the game did carry a modicum of meaning.

But Heat coach Erik Spoelstra didn’t even bother discussing the impact of Wade’s absence with James.

“He’s played in that role long enough,” Spoelstra said. “And he understood.”

It’s not to say that James is better without Wade (though that theory has been floated from a corner or two over the past year). It is actually commonplace for teams to get a short-term boost when they lose a key player to injury because it can force focus and give opportunity.

James Jones, for example, has been struggling to get regular playing time with the addition of Shane Battier and the emergence of rookie Norris Cole. Getting the spot-start for Wade, Jones nailed his first four 3-pointers and finished with 14 points.

Wade is hoping he’ll be able to return on Thursday when the Heat get a second chance this week at the Atlanta Hawks, who gave them their only defeat of the season on Monday. Because of the ankle, which was tender postgame and already swelling in the locker room, both James and Wade were unsure if they would be able to play.

Of course, the Heat need both of them to have the best chance to win Thursday or any other night. As was proven last season, they are very strong when sharing the load. But James did seem to relish a chance at a throwback game to fit with his current throwback attitude.

“I’ve been saying it ever since training camp: This is the best I’ve felt in a long time,” James said. “Even with my ankle.”