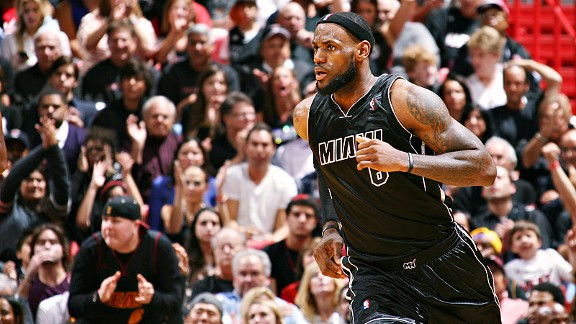 LeBron has been on the run this season, but without Wade as a co-pilot, the Heat have slowed down.

After meeting with Oregon football coach Chip Kelly this summer, Erik Spoelstra drew up the blueprint for his new offense. Built on the versatility and speed of LeBron James, Dwyane Wade and Chris Bosh, Spoelstra envisioned an attack that would essentially promote controlled chaos. Taking a page out of Kelly's full-spread offense, Spoelstra outlined principles that would allow the Heat to play up-tempo and unclog the lane for dribble penetration. He named it the "pace and space" offense and the players bought into the team's new slogan.

But with a month of basketball in the books, it seems that he might need to tinker with his mantra. With Wade on the floor, the Heat were running and destroying teams in transition. The "pace" was there. But in the six games that he has been sidelined with leg injuries, something interesting has happened: the Heat have slammed on the brakes. They have ditched the high-octane offense in exchange for a halfcourt offense built around the floor-spacing of its three-point shooters Mike Miller, James Jones and Shane Battier.

The numbers tell the story. While LeBron does his part to break the box score, the Heat have transformed its principles on the fly without Wade on the court. With the Heat this season, there have been two separate offenses: one that thrives on pace and one that thrives on floor-spacing.

Let's start from the top. If you have had a screen in front of you at any point over the past week or so, you're aware that the Heat have done well with Wade sidelined. But more interesting is how they've done it. They led the league in possessions per game (pace) with Wade on the floor, but it slows down to more tepid 93.8 possessions when the speedster wears street clothes. Instead of LeBron throwing a baseball pass to Wade, now he's throwing full-court outlet passes to Joel Anthony. (Yes, this happened on Sunday night).

We rarely see an effect that enormous when we're dealing with the impact of one player. But of course, it isn't just one player. Wade's departure coincided with Mike Miller's arrival. Lost in all the #WithoutWade hysteria is that the Heat were gaining one of their core pieces in Miller, who can space the floor with 3-point shooting and rebound like a big man. After rehabbing from hernia surgery, Miller has come out of the gates smoking hot, shooting 9-for-12 from downtown and tallying 8.1 rebounds every 36 minutes on the floor. When you replace a basket-attacker like Wade with a sharpshooter, you're going to naturally see some different results.

The Heat demonstrate why per-game numbers are misleading. When a team adds several possessions to their bottom line, the per-game numbers will be inflated. So it might be hard to notice, but the Heat offense has been much better in the games that Wade has sat once we adjust for the blinding pace. In fact, on a per-possession basis, the Heat have scored 110.6 points per 100 possessions, a mark that would give them far and away the best offense rating in the league. On a per-game level, the Heat have only gotten about two points better on offense, but the difference is actually much larger than that once you account for the Heat's speed of play.

How do we explain the Heat's improved numbers on offense? The Wade-less offense plays more outside-in than it did with Wade on the floor. With Wade abandoning his 3-point shot in bizarre fashion, the Heat chose to attack the basket in the halfcourt and in transition. In effect, Mario Chalmers was often the only 3-point threat on the floor for the Heat, which allowed the opposing defense to pack it in. It's worth mentioning here that Wade had been hampered by injuries even when he was on the court, and simply wasn't the Wade of last season. That's a critical point when dealing with the "Heat are better without Wade!" gallery.

No Wade on the court also means fewer highlight reels in transition. As we can see, the Heat have watched their fast-break points fall off a cliff with Wade sidelined, which isn't a huge surprise. Battier and James Jones aren't going to be leading any fast breaks any time soon and Wade creates so many turnovers with his hyper-activity on the defensive end. Remember, the 6-foot-4 Wade leads the Heat regulars in block rate.

Now, the Heat can deploy three 3-point shooters to surround LeBron and Bosh. Interestingly enough, LeBron and Bosh have also dusted off their 3-point shots in recent games. We only saw it for about five minutes in Sunday's game, but Spoelstra busted out the Chalmers-Batter-Miller-LeBron-Bosh lineup against the Bucks after debuting it against the 76ers the night before. The lineup played the Bucks to an even 8-8 score on Sunday, but that could be the Heat's most potent lineup with Wade out. Last season, the Heat's most effective lineups were the ones where they didn't have a traditional center on the floor, compensating underneath with Miller for rebounding.

None of this happens without LeBron's versatility. Few teams, if any, can flaunt a point forward quite like LeBron. On one possession, he'll bring the ball up the floor, and on the next, he'll bludgeon Evan Turner or Luc Mbah a Moute in the post. Spoelstra can tell LeBron to be John Stockton on one trip down the court and then ask him to channel Karl Malone on another, which is a luxury that coaches around the league would kill for.

The big question is whether Spoelstra can find a happy medium between these two playing styles. Can the Heat rain from downtown and speed up the game? It might come down to whether Miller can be healthy enough to stay on the court. If the Heat want to go small and surround the Big Three with shooters, they can get away with it as long as Miller maintains his rebounding and 3-point aggressiveness. Last season, he was afraid to pull the trigger and rightfully so, considering he had barely any use of his thumbs.

Using Bosh at center isn't anything new. Last season, when the Heat surrounded the Big Three with two shooters, they outscored opponents by a whopping 127 points, or a deficit of plus-25 points every 48 minutes on the floor. Spoelstra can do some of that with Battier and Jones, but a healthy Miller would shore up their weaknesses underneath better than the other two snipers.

Ultimately, the Heat need a healthy Wade back in the fold, first and foremost. Once their perennial MVP candidate returns at full strength, they can blend the two playing styles into one and finally make Spoelstra's "pace and space" vision a reality. But for now, they seem to be doing just fine.