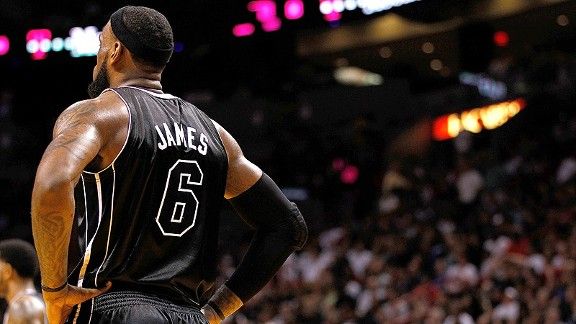 We thought Cleveland had seen the back of LeBron James for the last time.

If you're a LeBron James homer – some fans, select media members, flunkies, etc. – here's where you owe Kendrick Perkins a bit of an apology for summarily dismissing everything critical the grouchy Oklahoma City center had to say about Heat-Highness in the aftermath of Blake Dunk-gate.

And if you're a LeBron so-called hater – scorned Cavaliers fans, general "Decision" detractors, other select media members – now's as good a time as any for a slight reprieve, considering the attempted olive branch James apparently tried to extend Thursday in Cleveland.

The same LeBron, whom Cleveland owner Dan Gilbert once cast as Le-Benedict, publicly talked about patching things up with his former fan base and entertained the idea of possibly being a Cavalier again.

“You can't predict the future,” James told reporters. “I'm here as a Miami player and I'm happy where I am now but I don't rule that out in any sense. If I decide to come back, hopefully the fans will accept me.”

LeBron, less than two years removed from tearing the town apart with his messy departure, is on the right path to seek forgiveness on some levels for the way he left. He should be commended for taking that step in his other comments Thursday when he admitted that he, too, made a mistake, as did Gilbert, in their actions before and after the decision was made.

But this deal about LeBron seeking acceptance down the line is simply sad.

Yet again, LeBron has put folks in a position where they don't know which way to turn. All they know is that someone stuck a microphone in his face after the Heat's practice in preparation for Friday's game against his former team. LeBron took the inquiry, spun and turned up court with a full head of steam. He then revved up that massive frame to release another highlight.

Only this time, it wasn't a dunk. It was a set of interesting, unbelievable and disturbingly revealing comments that border on both innocent sincerity and a complete lack of self awareness. This was the basketball equivalent of rejecting Dwight Howard at the rim on one end, and seconds later blowing an uncontested dunk on the other.

Part patronizing, part putrid. Completely baffling. And it probably won't be long before LeBron wishes we were John Lucas III, that his latest mind-boggling move would have gone clearly over our heads.

Perkins clearly went too far, got too personal and seemed too childish when he ripped LeBron the other week for tweeting the delight he, along with the rest of the NBA, took in that dunk Clippers forward Blake Griffin unleashed in Perkins' face. But the mostly misguided Perkins was dead-on accurate when he suggested LeBron is a bit of a tortured soul desperate to be liked.

As well-intentioned as LeBron was for saying what he said Thursday, the only thing he accomplished was showing that he hasn't really come all that far from the way he handled his decision to leave Cleveland as a free agent in 2010 to sign with the Heat.

That's the only reasonable rationale I can see for LeBron saying that he wouldn't rule out one day returning to play again for the franchise that drafted him, and gave him complete run of the city. He returned the love by drastically inflating the value of Gilbert's franchise and leading the Cavaliers to the cusp of championship contention.

To ask whether fans in Cleveland would accept him back is a rhetorical question. Of course they would. As the song goes, it's a thin line between love and hate. And there's no TSA-type security checkpoint at the border of those emotions that allows you to gather yourself and come to your senses before crossing from one side to the other.

But this is more about wishing LeBron would know better after all of this time, all of these public relations stumbles. He should see a Cavaliers franchise that's just starting to regain its balance and feel-good footing with No. 1 pick Kyrie Irving as the clear face of the future. LeBron should know that interjecting himself into any aspect of that future – even the possibility – is borderline disrespectful to both the franchise his decision left in shambles as well as to his current employer, to which he's promised to deliver multiple cases of championship champagne.

Defenders of LeBron will say that it's OK to want to come home, that a large part of you should always long for a hero's return to the place that made you. But not many of us walk out of our own front doors, turn back to publicly trash the lawn and then bail. Granted, LeBron had every right to leave as a free agent who had given eight years to the Cavaliers. But while he was there, he had enough respect for the franchise not to talk about one day playing for another team.

“There's some things I'd want to take back as well,” James said of the venom that spewed between him and Gilbert two summers ago on the way out. “You learn from your mistakes and you move on.”

That's precisely where LeBron should take his own advice and … well, move on.

He shouldn't even be talking about any future that doesn't first include winning a title or two in Miami within the remaining two guaranteed seasons after this on his contract. I realize he was trying to be kind on Tuesday, but he needs to be more clever.

As Big Worm's character in the movie "Friday" would say, there's principalities in this. Heat president Pat Riley would never come out and say it or even show any sign of it, but Thursday's talk can't be sitting well.

LeBron is having the most efficient season of any player in NBA history, the Heat are playing their best ball since James, Dwyane Wade and Chris Bosh came together and there's no reason to believe Miami isn't on course to finish the job and win a title after falling short in last season's Finals.

But, even though he had good intentions, LeBron made his first bad move in a long while. If he's privately longing for Cleveland – or one day believes he might – give the Heat a heads-up so they could trade him. If not, don't patronize the public.

If Riley ever let word slip that he'd consider trading the two-time MVP to Orlando for Dwight Howard, how do you think LeBron would take it? My guess is he'd go Perkins on someone, whether he's justified or not.

From my view, LeBron is one of the most gifted athletes as well as one of the nicest yet misunderstood guys I've ever seen in sports. Sometimes, I get the sense that he'd trade it all in for the chance to be loved.

For now, LeBron remains a pure beast on the court who has the basketball gifts of a god. Every once in a while, like Thursday, they're overshadowed by the fact he sometimes has the public relations skills of a gremlin.

He should know that he's got a much better chance to win those five, six, seven championships in Miami than he'll ever have at trying to make everybody happy.