3-on-3 preview: Heat at Nets, 7:30 ET
10y
NBA stats-based win projections: Why one model has the Warriors fighting for a playoff spot
3dKevin Pelton
Hardaway, Manu among those enshrined in HOF
21d
Which NBA legends are headed to the Hall of Fame in 2023 and beyond?
22dKevin Pelton
The 'what-if' games from recent sports history
23dESPN
Heat's Haslem returning for 20th NBA season
42dNick Friedell
NBA to tip off season with opening night rivalries
46dTim Bontemps
Rivalries, returns and rookies: The NBA games you can't miss for 2022-23
46d
NBA 'all-in' tiers: Who is focused on the present, the future or is stuck in between?
46dTim Bontemps and Kevin Pelton
Apr 16, 2012 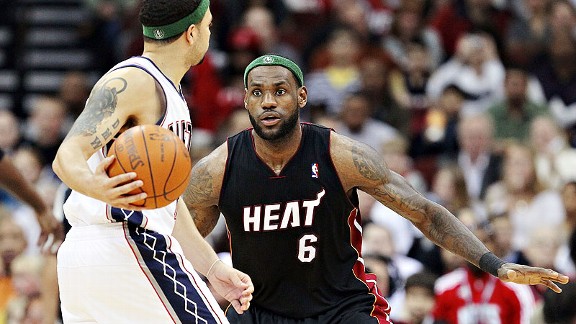 In another installment of the Heat Index's 3-on-3 series, our writers give their takes on the storylines before the Heat visit the Nets (22-39).

1. Fact or Fiction: This is the last time Miami sees D-Will in a Nets uniform.

Tom Haberstroh: Fiction. Deron Williams isn't the type to make a public stink with a trade demand, but I think it's telling that he has been outwardly OK with the Nets' rebuild. Perhaps it's because he assumes Howard will finally join him this summer if New Jersey can come up with the pieces in a trade (that 2012 first-rounder would've come in handy). Patience may indeed be a virtue.

Michael Wallace: Fact. I guess there's still a bit of fleeting hope that the Nets could somehow land Dwight Howard this offseason and keep Deron Williams. But the reality is that no team has struck out more times since that 2010 free agency bonanza than New Jersey. Williams is all but certain to be on the move this summer - and it probably won't be along for the ride with the Nets going across that bridge to Brooklyn. He's done his time and has given the Nets two seasons to build something around him besides loads of losses.

Brian Windhorst: Fiction. Williams does indeed seem like he's going to test the market and there's a comfy spot waiting for him in Dallas. While I'm not guaranteeing Williams will be back, I think there's a lot that could happen involving the Nets between now and July 1 that could affect Williams' decision. I do think the Dwight Howard trade sweepstakes will be re-opened soon after the Magic conclude their season. There's also a chance the Nets jump up in the lottery to the top three and keep their pick and get in position to draft an impact player. There's still a decent chance Williams is a Net next year.

2. Fact or Fiction: Your best guess is that LeBron gets the night off.

Haberstroh: Fact. But I've been wrong on these calls many times before. If he doesn't get the night off, then something's up. The Heat can't afford LeBron to be less than full strength for the playoff run and they know that. Another playoff flameout would be a disaster and a night off could go a long way especially with his gimpy ankle. Why risk it?

Wallace: Fact. But it might take a stern directive from Pat Riley at the top. LeBron made it clear the other night when logged 29 minutes against the Bobcats that playing through nagging injuries and late in the regular season "is just who I am, man. It's just how I've always been." LeBron even suggested he would have vetoed coach Erik Spoelstra's attempt to rest him. But after tweaking an ankle Sunday against the Knicks, it just wouldn't be wise to push it a night later - even without having to fly to face the Nets.

Windhorst: Fact. There's a ready-made reason: his rolled left ankle that he suffered in New York Sunday afternoon. Plus it's the fourth game in five nights and he's played in the other three. Plus, as I've been harping on for 10 days now, giving him time off is just a really good idea.

Haberstroh: Fact. But Dwyane Wade's post-halftime issues are a close second. Bosh's rebounding void continues to perplex the masses. Sure, Wade and LeBron gobble up a few of his boards every night and the Andrea Bargnani Effect can't be discounted, but 20 days shouldn't go by between Bosh's double-digit rebound outings. Considering their energy-burning defensive schemes, the Heat cannot afford to give up deflating second-chance opportunities in the playoffs. That hinges on Bosh.

Wallace: Fiction. I wouldn't just stop at rebounding. In fact, Bosh's overall play and consistency on both ends of the court are the biggest question marks facing any member of the Heat's Big Three, although there appears to also be something a bit off with Dwyane Wade. I've said it plenty of times: Bosh needs to play like an All-Star for this team to reach its full postseason potential. His 16-point, 14-rebound effort against the Knicks must be bottled up and carried into the playoffs. It is essential to overall success.

Windhorst: Fact. The Heat are such a different team when Bosh is more active on the glass. It allows them to get in transition more, it gets them extra possessions on offense and overall when Bosh is more active going after rebounds usually it carries over to other parts of his game. Rebounding has been a constant battle for the Heat all year. Bosh is supposed to be their best rebounder but he's had one of the worst rebounding years of his career. But it's not too late for him to turn it around. Though I do believe the opponent had something to do with how well Bosh performed on Sunday.