Speedy Heat run Knicks out of the playoffs
10yMichael Wallace
NBA stats-based win projections: Why one model has the Warriors fighting for a playoff spot
Atlanta Hawks
2dKevin Pelton
Hardaway, Manu among those enshrined in HOF
21d
Which NBA legends are headed to the Hall of Fame in 2023 and beyond?
21dKevin Pelton
The 'what-if' games from recent sports history
22dESPN
Heat's Haslem returning for 20th NBA season
41dNick Friedell
NBA to tip off season with opening night rivalries
45dTim Bontemps
Rivalries, returns and rookies: The NBA games you can't miss for 2022-23
45d
NBA 'all-in' tiers: Who is focused on the present, the future or is stuck in between?
45dTim Bontemps and Kevin Pelton
May 9, 2012 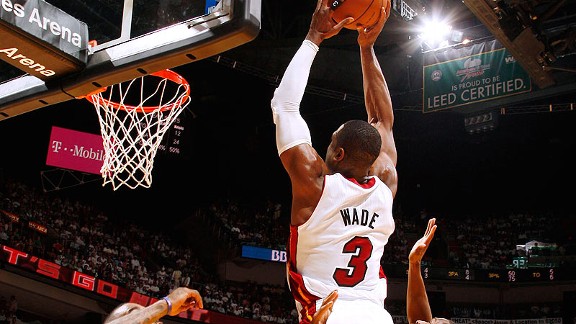 After sprinting past the Knicks, Dwyane Wade and the Heat look to fly high against the Pacers.

MIAMI -- Searching for ways to fix an offense that had sputtered through the previous two games in the series against the New York Knicks, Miami Heat forward LeBron James was asked before Game 5 on Wednesday what his team needed to do to generate a spark.

His answer was simple: run.

“We have to get some fast-break points to kind of open things up,” James said. “We haven't scored as much. But we know in the postseason, points are hard to come by. When you get the opportunity, you have to relish it.”

The Heat put a huge check mark beside that item on the list of pregame priorities after sprinting past the Knicks 106-94 on Wednesday. After completing a 4-1 series victory, the Heat advance to the Eastern Conference semifinals to play the Indiana Pacers.

Amid a balanced attack that featured a combined 67 points from James, Dwyane Wade and Chris Bosh, and a timely boost from Miami's role players, were several opportunities to get out and play at an uptempo pace on Wednesday.

After scoring 87 points in each of the past two games and shooting a combined 41.9 percent from the field in Games 3 and 4, the Heat outscored the Knicks 20-4 in fast-break points and scored 18 points off 14 New York turnovers. Perhaps the change of scenery played a part in the turnaround in the Heat's productivity. The performance Wednesday was similar to how the Heat played at home in the first two games of the series, when they topped the 100-point mark both times, winning by a combined 43 points.

Following Sunday's loss in New York, Heat coach Erik Spoelstra made it a priority in the team's film review on Monday as well as Tuesday's practice session to take more advantage of what he referred to as “relief opportunities.” The Heat's defense had held the Knicks to just 40 percent shooting through the first four games of the series, but they weren't converting many of the missed shots into transition opportunities.

That wasn't the case Wednesday, when James was committed to pushing the ball in the open court after defensive stops and finding teammates streaking on the wings. At one point in the second quarter, Bosh grabbed a rebound and quickly got the ball to Mario Chalmers, who then made a length-of-the-court pass to Wade for a dunk. It was a play that both caught the Knicks napping defensively and also personified the Heat's plan to speed up the pace.

“I think we ended up with 20 [fast-break points], right? That was the goal,” said Spoelstra, who still wasn't quite satisfied. “Of course, as a coach, I look at it and I saw a handful of missed opportunities. I still would have liked to have played a little bit faster and maybe have gotten closer to 30 in transition. But we're playing with energy. We were playing with speed. Our first two or three steps in the change of possession was good. Overall, we have been focusing on that, the change of possession. It was better.”

Counting the first-round series against the Knicks, the Heat are 28-4 this season when they score at least 100 points. Maintaining that pace stands to be difficult in the playoffs, particularly against a physical team like the Pacers, who they'll face in the second round starting on Sunday.

But Bosh said the key is for the Heat to find a way to bottle their effort and energy from stages of the series-clinching win against the Knicks and rekindle it back at AmericanAirlines Arena for Game 1 against the Pacers. Miami went 3-1 against Indiana during the regular season and averaged 101.5 points in those matchups, including a 118-83 victory in their first meeting on Jan. 4.

“The uptempo game is to our advantage,” Bosh said. “But with that said, we have to get stops. Once we get defensive stops, we get out into the open court and we have chances for layups. We can get Mike [Miller] and Shane [Battier] and Mario [Chalmers] spotted up for 3-point shots and, you know, we just hunt them down. Numbers don't lie. We're a really good team if we're getting the ball up the floor quickly. That puts a lot of pressure on guys because we're taking high-percentage shots and we're getting stops.”

That formula worked for the Heat against the Knicks. Miami had six players score between nine and the team-high 29 points James. (He also had eight rebounds and seven assists.) The Heat shot just 43 percent from the field Wednesday, but had 34 field goals on 20 assists.

In other words, Miami played with a pace and a purpose.

“We kind of took care of that and kind of got into the fight with those guys,” Wade said. “We moved the ball around and got the shots we wanted. We scored 106 points tonight. We played team basketball.”