Even after rout, Heat's best has yet to come
10yTom Haberstroh
Clippers honor L.A. in latest Statement Edition uniform
10hESPN.com
NBA stats-based win projections: Why one model has the Warriors fighting for a playoff spot
Atlanta Hawks
15hKevin Pelton
Hardaway, Manu among those enshrined in HOF
19d
Which NBA legends are headed to the Hall of Fame in 2023 and beyond?
20dKevin Pelton
The 'what-if' games from recent sports history
21dESPN
Heat's Haslem returning for 20th NBA season
39dNick Friedell
NBA to tip off season with opening night rivalries
43dTim Bontemps
Rivalries, returns and rookies: The NBA games you can't miss for 2022-23
43d
NBA 'all-in' tiers: Who is focused on the present, the future or is stuck in between?
44dTim Bontemps and Kevin Pelton
May 29, 2012 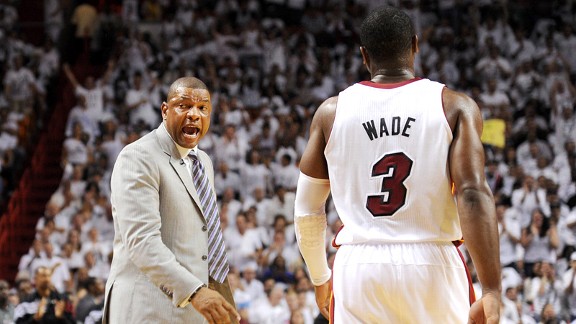 In some ways, Doc Rivers got what he wanted and the Heat still walked away with a Game 1 win.

MIAMI -- You could say that the Celtics took the Heat out of their game on Monday.

Knowing that the Heat thrive in transition, the Celtics were able to successfully take care of the ball. The eight turnovers by Boston rank as the lowest turnover total by a Heat opponent this postseason. Boston also didn't allow the Heat to beat them from downtown. The Heat shot an abysmal 20 percent on 3-pointers, missing 20 of them in total.

Boston neutralized the Heat's "pace-and-space" offense that combines a fast tempo and floor-spacing. As a team, the Heat were rarely able to get out in transition and their shooters were frigid cold from the perimeter. Mission accomplished.

And still, the Celtics lost by 14 points.

"It's a good sign," LeBron James said after the game. "We feel like we didn't play our best basketball tonight."

The Heat have developed the nickname of the Flying Death Machine because of their signature fastbreak assault that they use to destroy teams in the open court, but Game 1 was mostly a halfcourt game, just like the Celtics wanted it. Everyone remembers the touchdown pass from Dwyane Wade to James, but the Heat ended up tallying just 10 of their 93 points on fastbreaks. That fullcourt pass was the exception on Monday, not the rule.

Against a fatigued and battered Celtics squad, speed was supposed to be the big advantage for Miami. Coach Doc Rivers made it clear that keeping James and Wade out of fifth gear was a top priority. Rivers was asked pregame whether the Celtics should try to save a ball going out of bounds at the risk of tossing it directly to a Heat player for a fastbreak opportunity.

"Throw it in the stands."

And for the most part, the Celtics were able to keep the Heat in check in that respect. This was a slow-paced game that played into the hands of the increasingly creaky Celtics. The Heat weren't able to play their brand of basketball, but it's hard to imagine that being the case again in Game 2 on Wednesday.

And those 3-pointers that the Heat missed? That probably won't happen again. In fact, the Heat have never missed so many three-pointers in a playoff game and still managed to pull off the win -- a win by 14 points. A lot of those shots from downtown were of the golden variety from the corner where the line is shortest and the percentages are highest. But according to the NBA.com stats tool, the Heat were 1-for-11 on corner 3-pointers in Game 1, which has aberration written all over it.

Now, we could run in circles all day by playing the "What if" game and it's true that the Heat caught some lucky breaks that they can't count on happening again in Game 2. James and Wade were able to get into the paint and the Heat were able locked down the boards.

Considering the health and age of the Celtics, it's hard to look at their performance and expect another gear or two. This is a bad offensive team -- one that ranked behind the Nets this season in offensive efficiency -- that couldn't hit a shot in Game 1, but scoring points has been an issue all season for this club. And Avery Bradley isn't walking through that door.

Overall, this is a game that the Heat normally lose. They couldn't hit a 3-pointer and they weren't able to consistently flex their athleticism in transition. Instead of filling up the highlight reel, the Heat played a grind-it-out game and still coasted to a resounding win in Game 1. For a night, the Celtics took away what the Heat did best and it still didn't make a difference.

Considering the Heat didn't even get to their patented high-octane attack in Game 1, they have every reason to believe their best is yet to come.