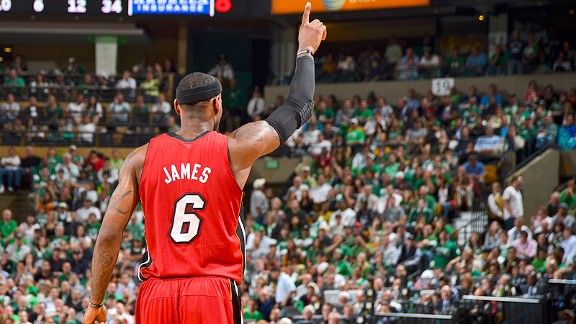 Was Game 6 No. 1 of LeBron James' playoff career? Considering what was at stake, it might be.

This is what we do. Seconds after watching an utterly brilliant game from LeBron James, we're conditioned to ask ourselves where this ranks among the greatest outings of his career.

Forty-five points, 15 rebounds and five assists on an improbable 19-for-26 shooting. Last time someone put up 45-15-5 in a playoff game? Elias Sports Bureau says you'd have to go all the way back to Wilt Chamberlain in 1964.

Before we put this in perspective in James' career, though, the baffling thing is that we don't even know if this was James' best game in the past month. Down 2-1 in the Indiana Pacers series, James put up 40 points, 18 rebounds and nine assists in a road win.

And statistically speaking, that Game 4 in Indianapolis tops Thursday's Game 6 in Boston.

How do we know? Using a box score metric devised by our own John Hollinger called Game Score, we find that James' 45-15-5 was just the ninth-best game of his career.

Hard to believe there were eight better, but here's the list that we put together just a few weeks ago:

Here are James' top performances in the playoffs.

Here's where this gets tricky. These are measured in a vacuum. There's no ingredient in this formula that accounts for the state of the series. You'll notice that the only game on this list that came after Game 5 was the one we just witnessed Thursday night.

In fact, James' Game 6 was the best performance statistically in an elimination game.

If you're one who believes that pressure and desperation should be in the mix, then you might have a case that this was James' best playoff game. Depends how many brownie points you give for series "clutchness." Considering Game 6 was do-or-die, it was pretty clutch.

Here are LeBron's best outings in elimination games (he's had only nine in his career):

So, what we learn here is that Game 6 on Thursday was by far the best game he's had with win-or-go-home stakes. The only one that comes close is Game 5 against Orlando in 2009, when he tallied a monster triple-double but, by his standards, shot somewhat poorly from the floor (11-for-24).

What do you think? Was Game 6 the best playoff game of his career?

Statistically, it might not be. But considering the stakes, there's a case to be made that we just watched James' best. Yet.