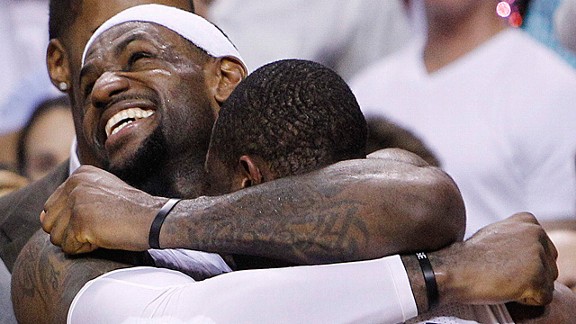 LeBron James became a champion in 2012 after realizing the power of a big man's game.

MIAMI – When the Miami Heat won the 2011-12 NBA Finals, we didn’t just see a team beat the competition. We just witnessed the validation of a grand experiment.

And it all wouldn’t have happened if the most talented player in the game didn’t realize he needed to evolve.

In a way, the Heat triumphed on Thursday night to beat the Oklahoma City Thunder because they lost one Sunday night last June to the Dallas Mavericks. The loss sent LeBron James into a deep hibernation of introspection. As the story goes, James didn’t leave his house for weeks, soaking in the Finals defeat and contemplating his next move.

And that next move did change everything -- James, the Heat and perhaps the landscape of the NBA itself.

The moment that James realized he was a big man -- but more importantly, embraced it -- remains the biggest catalyst to Miami’s title run. By doing that, the Heat were able to fully engage in unconventional warfare and redefine what a championship team looks like.

The Heat just won the Finals without a traditional center.

“We were all on the same page about it,” Heat coach Erik Spoelstra said after Game 5. “[James] dedicated the summer to develop that game, and that allowed us to play like the power teams that you see with a big center, but to do it with a versatile power forward. People saw us as small, but we played a power game. And LeBron was really pivotal in that.”

James was transcendent from the pivot in Game 5. He scored 26 points of his own, produced a career-high 34 points on assists to others, pulled down a team-high 11 rebounds and all the while guarding the league’s scoring champion. He was everything for the Heat, but he did it in a way that was so alien to what we saw last June.

On Tuesday, James pounded the paint with precision and purpose. With 18 points in the paint in Game 5, James finished up a series that saw him average 17.6 points from that area. Last Finals? That number was 8.7 points, or half as much.

When the Thunder realized they couldn’t guard James in the post one-on-one, they sent a cavalry to swarm him. And he mowed them down, one by one. On the night, James fed eight 3-pointers to five different players, each shooter catching the ball across the letters in rhythm. Who does that?

The slicing passes from the post to the perimeter, that’s what separates James from any post player in the game. The 34 points that he produced on assists was the most of his postseason career and the second-most we’ve seen in the past 15 Finals series.

All of James’ talents were on display for the world to see in Game 5. Working from the post with his bruising size and picking the defense apart with his searing vision. Versatile and unconventional.

“There’s no question,” Spoelstra said, “we all knew that this team was built a little bit differently, and we needed to absolutely embrace what some would see as unconventional. We would need an inside presence to be able to play inside-out. LeBron knew that as well.”

By going to the block, James unlocked Heat president Pat Riley’s vision of versatility. There’s a reason his migration coincided with the breakout postseason from Shane Battier, the player that caused Riley to have flashbacks to his Showtime Lakers teams that were stocked with multidimensional wing players. Battier's signing was met with skepticism. Why not go after a center? Why another wing player?

The answer was clear on Thursday: They didn’t need a center. Or at least a traditional one. They had their starting center already in Chris Bosh.

For much of the playoffs and especially in the clinching Game 5, the Heat used James at the nominal power forward slot and Chris Bosh at center. And they blew out the competition with that formation.

Think about that for a moment.

“It’s not weird being a champ, it’s just weird the subtitle that I have,” Bosh said after the win. “After they asked me to move to the 5, I didn’t fight it.”

This was a decision that came in the offseason and it led Bosh to put on significant weight. Bosh entered camp 15 pounds heavier, but that was too much for the Heat coaching staff. Why? They needed him to be nimble defensively. He was going to be long and quick and defend the paint like he never defended before.

By the end of the playoffs, Bosh was regularly starting at the 5, walling off the paint, and blocking shots at the rim. This is a completely different player than the one in Toronto. In the nurture vs. nature debate, Bosh proves the former is possible. Though James' embracing his big man status was certainly the domino that started it all, it wouldn’t work unless Bosh owned up to being the biggest man.

“Another big step was Chris embracing the center position,” Spoelstra said. “That really took our team to another level because of his speed, his skill set, he could defend multiple positions. But as a center, he became one of the tougher covers in the league. You know, he really had to sacrifice quite a bit and get out of his comfort zone and things that he was used to in Toronto.”

Sure, the Heat possessed a point guard in Karl Malone’s body and a 3-point shooting center, but the versatility doesn’t end there. We haven’t even gotten to Dwyane Wade, who tallied more blocks this postseason than anyone on the team.

For several minutes in Game 5, the Heat didn’t play anyone that stood more than 6-foot-8. And they still won the battle of the boards, in the paint and in the blocked shot column. The Heat weren’t tall, nor were they conventional. And it didn’t matter. Their power was in their versatility.

On Thursday, they were an inside-out train that could not be stopped, just as Riley envisioned it in the summer of 2010. James made himself better, and in that process, he made those around him better.

Just like a champion ought to be. If this was an experiment, James passed the ultimate test.

“It just shows,” James said, “when you’re committed and you give everything to the game, the game pays off and it gives back to you.”