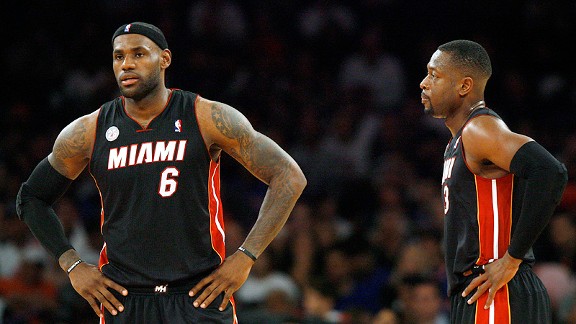 The Heat lost by 20 points, but LeBron James and Dwyane Wade didn't seem to mind all that much.

NEW YORK -- The last time the Miami Heat lost a game by 20 points when LeBron James, Dwyane Wade and Chris Bosh all played was in the 2011 playoffs to the Chicago Bulls. Before Friday night at Madison Square Garden, in fact, it had happened only two times since the three signed in 2010.

So what was the mood like as the Heat recovered from getting blitzed 104-84 by the New York Knicks?

“Who,” Wade said from nearby, where he was getting dressed.

“James Harden, put up 45 points and seven rebounds, and [the Rockets] won in Atlanta. That’s two in a row, on the road,” James said.

Then James reviewed league-wide box scores on his tablet and announced some of the events of the evening to his teammates -- “[Brandon] Jennings had 21 [points] and 13 [assists] in Boston” -- before breaking out his phone, the fancy one he shows off in those new commercials, and watching the Memphis Grizzlies-Golden State Warriors game live.

No, it wasn’t that the Heat didn’t care they’d just been run out of the building by a hot-shooting Knicks team. It was that they didn’t seem to care that much.

Coach Erik Spoelstra had his postgame meeting discussing the generally lackluster game and struggles on defense that contributed to the Knicks making 19 3-pointers. That’s 19, as in one short of the team record and just six short of the number the Knicks made in their entire five-game playoff series with the Heat this past spring.

But after beating New York seven times in eight meetings last season, their attention was not yet captured. The Knicks were just fantastic shooting the 3-pointer, making more than half their 36 tries. And the fact that New York shot only 35 percent on 2-pointers -- 14 of those misses from Carmelo Anthony, who had a typical volume night of 30 points on 28 shots -- was just as remarkable. There will not be too many times in the NBA this season that a team shoots such a low percentage on 2-pointers and wins.

Anthony did just fine on 3-pointers, making four of eight, and combined with Jason Kidd and Steve Novak to go 12-of-21. The Garden delighted in it, every seat full despite widespread transportation problems in the city following this week’s terrible storm.

There was some significant conjecture about whether the game should have been played at all with the devastation that existed just blocks from the arena. But by the end of the first quarter, when the Knicks were already up by 16 points, it didn’t seem like any Knicks fans were upset the game went ahead.

If there was one thing that was bothering the Heat, it was how they’ve started the season defensively. The Knicks had impressive ball movement, and it repeatedly bested the Heat’s rotations, which were sluggish and out of rhythm. The Heat’s style of defense requires above-average effort because typically it’s so aggressive.

“We’re clearly much better than this,” Spoelstra said. “That’s not the way we want to play defensively. There’s some things we’re encouraged about offensively; we see the progress. But we can’t be confused about the foundation of how we want to play.”

The Heat also had 21 turnovers, some because the Knicks were active in looking for steals. They had 10 of them. But also because the Heat didn’t seem ready to match the emotion of a team playing on its opening night against the team that put it out of the playoffs last season.

“Right from the get-go, you could tell there was a difference in energy, disposition and quickness to the ball,” Spoelstra said.

Not a good night for the champs, but not one they were stressing out about, either.

“This team has always done a good job of learning from our mistakes,” Wade said. “And we will.”