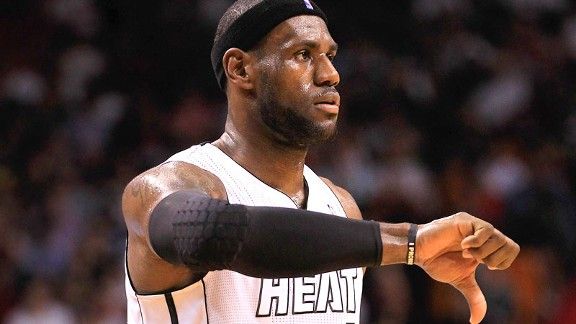 LeBron James does not approve of the New Orleans name switch to "Pelicans." But do you?

In another installment of the Heat Index's 3-on-3 series, our writers give their takes on the storylines before the Heat host the Hornets on Saturday and aim to improve to 13-5.

Tom Haberstroh: Under. I've never seen a Heat practice more serious and businesslike than Friday's. I thought the Heat were going to get back on track Thursday, so my prediction with a grain of salt: Hornets don't score 85 tonight.

Michael Wallace: Under. Way under. I'd be a bit surprised if the Hornets score 90, even though Miami is yielding 100.6 points a game this season.

Brian Windhorst: Under. LeBron has an "everybody makes shots against us" theory. The Heat, of course, need to look in the mirror on that issue; it's not a freak occurrence if it keeps happening. That said, the Hornets have one of the league's worst offenses. I know that was the case for Washington, too, but I suspect the Heat are going to try to take out some frustration.

2. Over/Under: 10, Miami's ranking in defensive efficiency at end of season.

Haberstroh: Over. Just over. The Heat would have to play top-notch defense the rest of the way to rise from 23rd all the way into the top 10, and I don't see them flipping the switch anytime soon. That's a lot of ground to make up.

Wallace: Under. We saw the Heat get off to similar sluggish starts defensively each of the past two seasons. Yet they always hit a stride and finish in the top 10 by the end of the season. As LeBron said, it's not as if the Heat are trying to work in 15 new players. It's about making the commitment to defensive dominance.

Windhorst: Over. They play a style of defense, and have for a while, that requires a great deal of energy. They have the ability to be a great defensive team, but they don't have the motive during the regular season. As much an improved offense as lack of focus.

3. Fact or Fiction: You approve of the "New Orleans Pelicans" name change.

Haberstroh: Fact. Not only do I approve but I endorse it. Pelicans are vicious, bloodthirsty animals. Don't believe me? Watch this. I'm looking at you, Dwyane and LeBron.

Wallace: Fiction. I've spent many years in Louisiana, having attended college and worked my first reporting job there. So I do have some emotion invested here. I don't like Pelicans. I'd instead prefer something a bit more distinct, like the Satchmo(e)s or the Jubilees.

Windhorst: Fact. The outrage is silly; most new nicknames seem odd at first. People didn't like "Thunder," either. Can you imagine if Twitter had been around when "Knickerbockers" or "Lakers" were announced? Back in the '80s, people made fun of "Heat." If the Pelicans become a good team, people will love it.