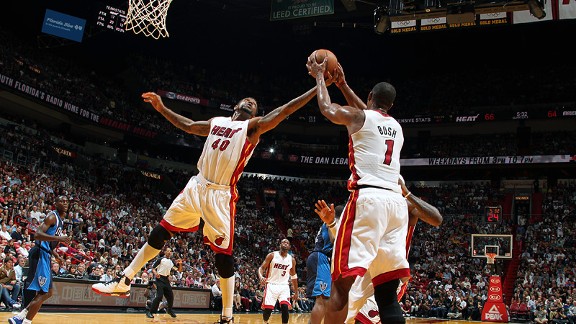 It seems the Heat have a rebounding problem.

The defending champs rank in the bottom 10 overall in rebound rate and second to last on the offensive glass. This has generated heaps of criticism toward both Chris Bosh and the Heat's decision to embrace small-ball after winning the title with it.

But here's the thing: The Heat have already ditched small-ball, and when they did, they became a worse rebounding team.

This is Miami's rebounding paradox. Sunday's game against the Washington Wizards marked the one-month anniversary of Udonis Haslem's promotion to the starting lineup. On Dec. 6, Heat coach Erik Spoelstra, looking to shore up the increasingly problematic second unit, decided to insert Haslem into the starting five against the New York Knicks and bring Shane Battier off the bench as he rehabbed from his strained MCL.

We can debate all day about the importance of starting lineups or the lack thereof, but this was a landmark move in the Heat's season. Spoelstra, at least temporarily, put the title-winning formula on hold by slotting two traditional big men next to LeBron James.

Spoelstra went "big" and by doing so, it accomplished a couple of things. One, it allowed Joel Anthony to anchor the second unit's previously porous defense. So far, that's worked out and the defense has improved.

Secondly, it gave the Heat an additional big man next to Bosh to help on the boards. Haslem is known as the Heat's rebounding specialist. Earlier this season, he became the franchise's all-time leading rebounder, and last season he ranked eighth in the NBA in defensive rebound rate.

But the interesting thing is that Haslem's promotion has had the opposite effect on the Heat. Since Haslem entered the starting lineup, the Heat have ranked 24th in rebound rate. Before then: 21st.

Dig deeper and the issue becomes clear: The Heat's "big" starting lineup has gotten crushed on the boards. The five-man unit with Haslem next to Mario Chalmers and the Big Three has played 189 minutes together this season, which ranks 26th in the league, according to NBA.com's advanced stats tool. Among the top 30 five-man units with the most minutes in the NBA, that Chalmers-Wade-James-Haslem-Bosh lineup ranks 28th in rebound rate, grabbing just 45.5 percent of all available rebounds. A 45.5 percent rebounding rate would rank last in the NBA behind the Dallas Mavericks.

You want to know which lineup ranks 17th in rebounding among those 30 most common lineups?

The Heat's "small" starting lineup with Battier. Yes, better than the Haslem lineup.

How can this be?

There's a big difference between rebounding on the individual level and on the team level. Individually, Haslem does very well on the boards; he averages 9.6 rebounds per 36 minutes, which is the highest in Miami's rotation. But on a team level, the Heat have actually done worse on the boards when he's on the floor this season.

This is the opposite of the Bargnani Effect, the phenomenon when Bosh became an all-world rebounder when he played alongside Andrea Bargnani (the anti-Mr. Clean on the glass). When Bosh plays next to Battier in that starting lineup, he grabs 11.0 rebounds every 36 minutes. Those are numbers that Heat fans want to see from Bosh. But Bosh's boards have been cut in half when he plays next to Haslem.

Does Haslem steal Bosh's rebounds? And why do the Heat's rebounding numbers suffer when Haslem is on the court?

These are very good questions, and it's tough to pinpoint the answer. It could hint at something that probably doesn't get the attention it deserves: rebound hogging. That's when a player "steals" live rebounds from his teammates that would have been safely recovered anyway. This seems quite selfish when you think about it, and "selfish" is the last word people (especially those within the Heat organization) associate with Haslem, so something else is probably going on here.

It could very well be the case that when Haslem steps onto the floor, the other Heat players simply get lazy and let him swallow up all the boards. Bosh may be as guilty of this as anyone. Yes, Haslem has been a strong rebounder over his career, but he's 32 years old and his rebounding numbers are their worst since 2008-09 once you adjust for playing time. He may not be up to the task anymore.

That the Heat have rebounded worse with Haslem this season flies in the face of all the conventional wisdom. Bosh has actually been a solid rebounder this season, but not when he plays next to Haslem. It may not be Haslem's fault, but if the Heat aren't demonstrably better as a team on the boards with him on the floor, what exactly is he out there for?

That's a tricky question for Spoelstra that's being made even trickier lately. Haslem collected 12 boards on Sunday, but here's the dirty little secret: they rebounded better as a team when he was on the bench (53.7 percent of all available boards with Haslem on the court, 60.0 percent off the court).

That's the Heat's problem in a nutshell. But can they solve it? It's fitting that their next test comes Tuesday against the Pacers, one of the top rebounding teams in the league. Yes, the same opponent that prompted Spoelstra to put Battier in the starting lineup and go "small" in the postseason. And we all know how that turned out.