Anatomy of LeBron James' last 65 shots
8yTom Haberstroh
Riley ready to run it back with similar Heat team
5d
Heat's Butler: Didn't do my job, but 'we'll be back'
17dNick Friedell
Lakers dominate Heat for first title in a decade
17dDave McMenamin
LeBron's dominance, Rondo's resurgence and big takeaways from the Lakers' title clincher
17d
Dragic powers through injury, plays in Game 6
17dMalika Andrews
'He's right where he wants to be': Jimmy Butler is cementing his legacy
18dRamona Shelburne
Feb 10, 2013 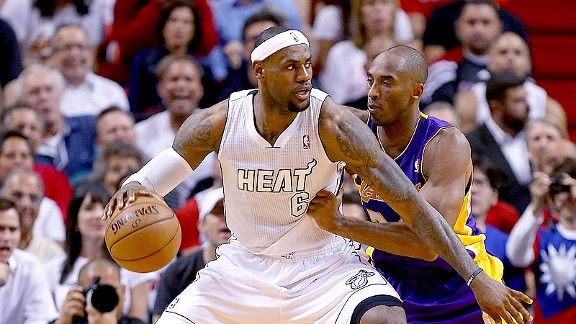 LeBron James kept up his hot streak against Kobe Bryant and the Lakers.

MIAMI -- With 9:24 left in the fourth quarter in last Sunday’s game in Toronto, LeBron James took a fadeaway jumper off the left wing and it missed off the back iron.

When alerted of those numbers after Miami Heat's win over the Los Angeles Lakers on Sunday, James did a double-take in front of his locker.

Pretty good, indeed. But how exactly do we put 49-of-65 in proper perspective? Teammate Shane Battier said that task is impossible.

“You can’t, at least historically,” Battier said. “I don’t want to talk about it. It’s like blowing up a no-hitter.”

We’ll save that superstition for Battier because this streak is too remarkable to leave it be.

James is shooting 75.4 percent since that missed jumper in Toronto. He finished 4-of-4 that game and then shot 13-of-14 against Charlotte, 11-of-18 against Houston, 9-of-11 against the Los Angeles Clippers and, finally, 12-of-18 against the Lakers on Sunday.

He has shot better over his past 65 shots from the floor (75.4 percent) than he has at the free throw line this season (73.8 percent).

And those 65 shots haven’t been easy, nor have they always been in close proximity to the basket. Of his 49 makes, nine have come via dunk, including two alley-oops. But nine have come from beyond the 3-point arc.

“It is the same shot selection, they are just going in,” Heat center Chris Bosh said after the game.

Here’s a distance breakdown of those 65:

Here’s how his 65 shots look when you write it out:

That’s 16 misses in all. There have been 49 instances this season when a player has missed at least 16 shots in a single game. Carmelo Anthony has eight of them; Kobe Bryant has seven; James Harden has two; Kevin Durant has two; James has one.

When has James been at his best during this stretch? He’s shooting 25-of-27 before halftime, missing a shot in both the first and second quarter. His worst quarter is the third quarter in which he has shot 57.7 percent. Actually, his jumper that he missed with 10:21 to go in the final frame against the Lakers? That was his first miss in the fourth quarter over this stretch. James had been a perfect 8-for-8 on fourth-quarter shots until then.

No, this streak hasn’t been easy. But when asked about James’ recent shooting streak after the win, Heat coach Erik Spoelstra paused for a bit and grinned.

“I say this to Miami fans, ‘Don’t take it for granted.’ He makes greatness look easy.”