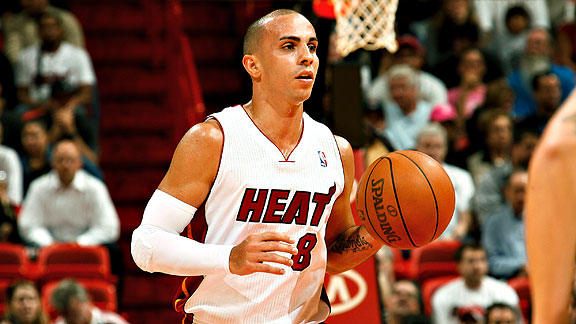 Carlos Arroyo might not be the long-term solution at point guard, but he's certainly not the problem.

MIAMI -- Carlos Arroyo would like you to know he's an honest-to-goodness point guard. The kind of point guard who was second only to Chris Paul last season in assist-to-turnover ratio. An on-court leader with the poise to guide the Puerto Rican national team to an upset blowout over the United States in the 2004 Olympics. A coach on the floor who can spearhead an offense with sound decision-making.

Yet these days, you're more likely to find Arroyo dumping the ball off to James at the top of the floor, then receding to the weak side corner. While the defense packs the middle, anticipating James' move, Arroyo waits for his opportunity.

The playmaker has turned playmate, but it seems to be working just fine.

"I’ve played point guard all my life," Arroyo said. "I call the play, call the shots out there. I’m the coach, controlling the tempo of the game. This year, I have to play off the ball. It’s a process, but I’m getting used to it.”

Arroyo was at ease with that role on Friday night in Miami's 99-90 win over Philadelphia. He scored 17 points on 6-for-9 shooting from the floor, including 3-for-4 from beyond the arc. How is the Heat's nominal point guard getting his looks? Take the possession at the 2:40 mark of the third quarter with the Heat clinging to a 67-66 lead.

James brings the ball up the right side of the floor, while Arroyo sets up in the right corner. Center Joel Anthony sets a cross-screen that allows Arroyo to breeze along the baseline from the right corner to the left corner. Sixers point guard Jrue Holiday, who has been guarding Arroyo, follows him only as far as the middle of the floor. As Anthony steps high to give James a screen, Holiday stays in the paint, waiting to see how the pick-and-roll action will play out. As the Sixers' defenders trap James along the right sideline, James passes the ball off the Juwan Howard at the top of the circle. Howard quickly swings the ball to the left corner, where Arroyo waits by himself. Holiday, who picked up Anthony as the big man rolled to the hoop, can't possibly rotate that quickly. Arroyo gets his third 3-pointer of the night.

"There’s a reason why he’s been open -- teams are putting an extra guy in the paint to load and help," Heat head coach Erik Spoelstra said. "With him, it’s just the mentality of stepping up and that’s what the team needs, for him to take his shots in rhythm as one of our best shooters and make them pay for playing that type of distorted defense."

This is an entirely different function for Arroyo. Consider this: In his previous three seasons, 25, 24 and 38 percent of his field goals had been assisted by teammates respectively, which is fairly normal for a point guard. But this season, 74 percent of Arroyo's buckets have come courtesy of a pass from a teammate.

"With the ball handlers we have on this team and as much as me and D-Wade handle the ball, that puts him in situations he’s not accustomed to, like sitting in the corner and being in the payoff spot at times," James said. "I think he’s making the adjustment a lot faster than any of us by just running to a spot or getting to a spot and being a recipient when they double us. He’s making that shot. He’s made that corner-3 over and over and over."

Arroyo has drained 13 of his 20 3-point attempts this season and is posting a career-high true shooting percentage of 63.3 percent -- that's the best mark of any starting point guard in the NBA.

Prior to the season, Arroyo was cited, along with Joel Anthony, as the Heat's most glaring vulnerability. As we continue to diagnose the Heat's ongoing struggles, an argument can be made that a dynamic point guard -- or a strong system playmaker -- would help cure the Heat of whatever ails them. Arroyo has his limitations, many of them on the defensive side of the ball (Basketball Reference has him ranked last on the team in defensive rating, or points allowed per 100 possessions). But there's little evidence to suggest that Arroyo has been anything other than a low-use, high-percentage offensive perimeter player for Miami. He's made the most of his limited possessions while adjusting to a role he never dreamed he'd assume on a basketball court.