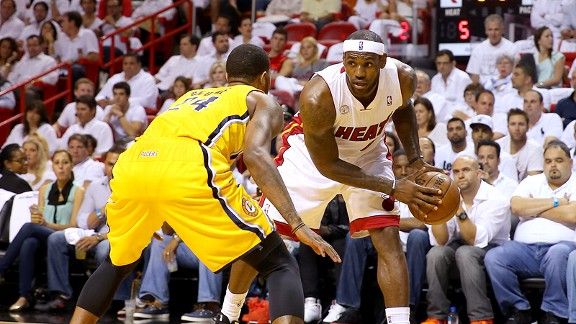 LeBron James and Paul George both made big plays in Game 1.MIAMI -- Paul George will never forget that moment in 2009 when, as a skinny 19-year-old, he found himself guarding the reigning NBA Most Valuable Player in a pickup game.

Every year, LeBron James hosts the top high school players in the country at a Nike-sponsored camp. Many top college players are also there as “counselors.” In reality, it’s a recruitment fest for college coaches and a chance for Nike to develop ties with talent they one day may try to hire as endorsers.

One of the highlights every year, both for the few spectators allowed in and certainly the young men themselves, is when James suits up and takes on the teenagers in pickup games. It’s common that he’ll bring some NBA friends to those games including, at times, fellow superstar Chris Paul.

It was in one of these moments that George ended up not only fulfilling a dream by sharing the court with James but actually drawing the defensive assignment against him. After a good freshman season at Fresno State, George was invited to the camp and once there was given the wave over to the court where James was playing.

“I like challenges and it was a challenge,” George said. “It was my first time playing against someone of his nature. It was fun. I took a lot away from it.”

There was no way either of them realized back then that this was going to be the first of many showdowns.

And it will indeed be many because, even if it may not be getting the proper attention now, James versus George is almost assured to be the newest great rivalry in the NBA.

At age 28 and in his prime after winning his fourth MVP, James isn’t going anywhere. At age 23 off his first All-Star season and his first appearance on the All-NBA team, neither is George. They are already playing their second playoff series against each other and their teams both have aspirations of being back playing deep into the playoffs for the foreseeable future.

In Wednesday’s Game 1 of the Eastern Conference finals, they traded off making huge plays for their teams in the fourth quarter and overtime. George had a brilliant three-point play driving right through James, then followed it up with a clutch 3-pointer over him at the end of regulation that forced overtime.

James got him back by securing a crucial rebound in overtime by outleaping George. Then, in one of the biggest plays yet in the postseason, James burned George on the game’s final play by driving past him to the rim for the game-winning layup at the buzzer. George had taken a bad angle and James crushed the error, leaving George up thinking about the mistake until after 4 a.m.

As satisfying as their Game 1 dueling performances were -- James had 30 points and George 27 -- it was just the preamble. Both in this series and in what figures to be years to come.

They are already two of the best perimeter defenders in the league and they play the same position. That means they’re going to end up spending lots of time guarding each other in pressure situations in important games.

“He’s going to be a great one,” James said. “I thought he had some unbelievable talent back [in 2009] when I met him. He went to a school that no one really paid attention to. But I’m one of those guys who stays up late at night and watches those games. I knew him.”

James got the better of George in the playoffs last season. Though he split the defensive duties with Danny Granger, when James and Dwyane Wade went on a three-game scoring binge to win that second-round series, plenty of it came at the expense of the still-learning George.

But George's rapid improvement really caught James’ eye a few months later in Shanghai when he impressed James in some workouts and exhibitions on a Nike promotional tour last summer.

Now George has James and the Heat’s full attention.

That’s what makes this budding rivalry so intriguing, because of how much George and James are alike. They are listed at 6-foot-8 but are actually probably 6-9 or perhaps even taller in George’s case. They both have terrific quickness and versatility defensively. They both are their team’s leading scorers and best passers. They’re both strong rebounders. It says it all that they’re the only two players in the East to have a triple-double in the postseason.

It just has the look and feel that it’s the start of something.

“His coach and his teammates trust him with a lot of responsibility,” James said. “They’ve given him a lot of opportunity.”

“The more I guard him, the more I’ll understand his game,” George said. “With LeBron, you’ve got to be on your toes.”

George is not as dynamic an offensive player as James at this point. While James has taken leaps in his shooting and overall efficiency in recent years, George struggles at times with shot selection and is known to battle turnover problems.

Then again, Wednesday was James’ 23rd career conference finals game. It was George’s first. They don’t compete totally on an equal footing from a skill development or experience standpoint.

At least not yet.

“I’ve got a lot of potential left,” George said. “I’m 23 with ambitions of being great in this league and I won’t stop until I get there.”