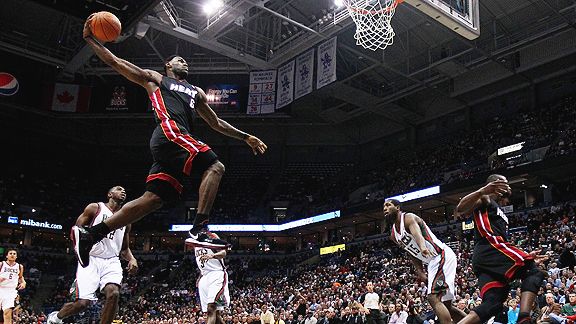 The Heat are flying as a team through their transition game, much thanks to LeBron.

Tonight, the Heat will face off against the the Golden State Warriors, one of the fastest teams in the NBA.

The Warriors are a timely opponent seeing how the Heat's tempo has been a lightning rod for conversation recently. In a studio roundtable discussion led by ESPN’s Kevin Connors, NBA analysts Tim Legler, Chris Broussard and Tom Penn offer their explanations for the Heat’s win streak.

Hint: it's all about transition.

Penn, a former vice president of basketball operations for the Portland Trail Blazers, kicks things off with some hard data that sheds light on the Heat’s transition game, their most potent scoring attack.

The numbers, courtesy of Synergy Sports Technology, reinforce what we already know: the Heat are at their best in the open court with LeBron James and Dwyane Wade leading the break. Watching them this season, it seems like every time the Heat push the ball after a miss, they either earn an easy bucket or a trip to the free throw line. And sometimes both.

Like every other team, the Heat are more dangerous on the fly than in the half court. All told, the Heat average 1.21 points in plays that end in transition and 0.94 points in the half court offense. Simple logic suggests that the Heat should run at every opportunity possible, given the greater payoff.

And Erik Spoelstra knows this. From the team's first press conference this season, the coach has emphasized the importance of getting defensive stops so the Heat can fly. But it's a new philosophy for all involved. Wade and James have never played on a high-paced team. Wade has gone as far to say he wants no part of a run-and-gun style of play that the Phoenix Suns employ. And Spoelstra has never coached a fast team either. So it has taken some time for the Heat to fully embrace the mindset to push off of defensive rebounds and unleash the merciless attack.

But it appears that the Heat have finally bought into Spoelstra's commands. When did it happen? Looking at the data, the Heat stepped on the gas in Dallas after a series of sleepy games peppered with stagnant half court offense. Their transition rate (percentage of transition plays as part of their overall offense) over their last seven games has been above their seasonal average of 13.4 percent. 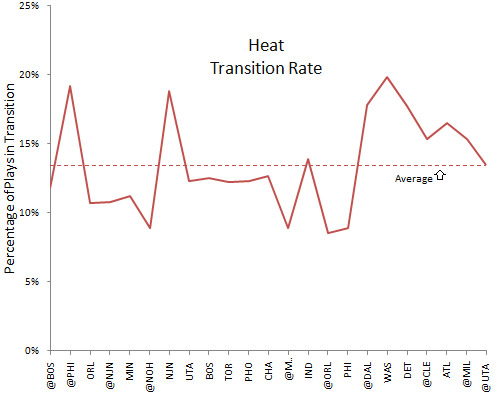 Thanks to their acceleration lately, the Heat now rank 12th in the NBA in transition rate which is still below where many think they should be. But if we believe their recent transition game is a permanent switch, then their 16.5 percent average over the past seven games would rank head and shoulders above the entire NBA; the Pacers and Bulls currently lead the league with 14.7 percent of their possessions in transition.

Why? LeBron's surprising propensity to turn the ball over.

The two-time MVP has 19 turnovers in transition this season, which gives him the tenth highest rate among 44 players with a minimum of 50 transition plays. The freight train sometimes gets derailed.

We saw it in the Bucks game. In the late second quarter, LeBron recovered a loose ball after Juwan Howard tipped an entry pass away, pushed the ball up the court, and tried to hit James Jones for a corner three on the break. He threw it away.

We saw it against Detroit when Tayshaun Prince poked the ball away from LeBron's dribble from behind. We have seen him barrel through defenders who bravely step up to take the charge (Andray Blache, Tyson Chandler, and Goran Dragic have each taken one for their respective teams in transition).

But he's getting better. After coughing it up 18 times in his first 19 games, the 6-foot-8, 260 pound ball-handler has only one transition turnover in his last four -- a scary trend for opponents. Maybe he was pressing in his new digs and trying to do too much for the fans.

But whatever it was, those nerves appear to be calmed now.

There was one play in the first quarter of the Utah Jazz game on Wednesday night that was particularly striking. After Raja Bell swished a mid-range jumper, LeBron immediately took off running as Erick Dampier retrieved the ball under the basket to pass it in bounds. What was the trigger? James saw Wade leak out past Deron Williams who was leisurely strolling back on defense. Dampier immediately fed James who was already in a dead sprint down the floor. Once James got the ball, he took only one dribble before delivering a scoop-pass to Wade on the run. Wade finished the play with ease as Bell helplessly tried to stop the two man show.

It was amazing to watch. Out of nowhere, James and Wade generated a 2-on-1 fast break. Off a made basket. You can see the play here.

If the Heat can catch Deron Williams sleeping, it's frightening to imagine how many other players they could victimize in the future. These are the type of plays that display the newfound chemistry between James and Wade. Right now, it's only a matter of desire. They know they're relentless in the open floor but the run-and-gun style requires full commitment and stamina to execute consistently.

Over this young season, we've caught glimpses of how powerful this team can become when their running on all cylinders. Or just running in general. Only it's not glimpses anymore. It's increasingly becoming the norm.