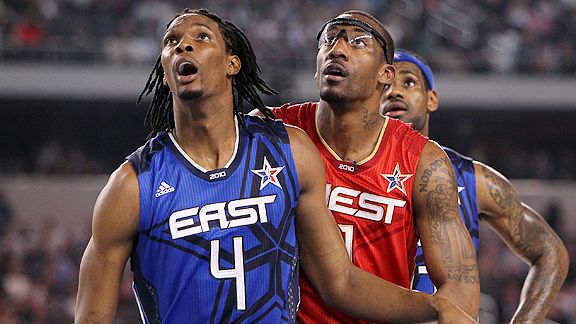 Chris Bosh and Amare Stoudemire face off on Friday night. What if the roles were reversed?

Chris Bosh and Amare Stoudemire took different paths this summer. One joined LeBron James and Dwyane Wade in Miami, while the other is a leading candidate for league MVP in New York.

But what if Stoudemire, not Bosh, had signed in Miami instead? The MVP candidate would surely make the Heat better, right?

Well, it’s not that simple.

As is often the case in the game of basketball, it’s much more complicated than merely translating individual performances from one team to another. Context is important.

Sure, Stoudemire is averaging a career-high 26.7 points, but as the Knicks' centerpiece, he’s also experiencing a career high in shot volume. When we look at Stoudemire’s efficiency numbers, his MVP campaign is essentially a carbon copy of his career norms.

And offensive rating? 117, now 111. If anything, his efficiency has dipped slightly in his new digs.

The fact is that Stoudemire is receiving more touches than ever. Fueled by his career-high 18.7 field goal attempts per game, he has used an estimated 30.6 percent of Knicks possessions while he’s on the floor, which is the highest usage rate the NBA has seen for a big man since Zach Randolph’s monster season in 2006-07. So if you’re looking for the biggest catalyst for Stoudemire’s MVP campaign, be sure to account for the sheer quantity of shots.

Why harp on the swollen shot volume? Because that’s the one thing Stoudemire would need to check at the door if he were in Miami alongside two ball-dominant superstars in James and Wade.

This is why context is important. In a vacuum, there’s no doubt the Heat would welcome a 26.7-points-per-game scorer on the block. But it’s imperative to understand that it took a gaudy number of shot attempts for Stoudemire to achieve his scoring average.

It’s no secret that the presence of James and Wade has taken a sizable bite out of Bosh’s shot intake this season. The former Toronto Raptor has taken only 13.7 field goal attempts per game, which is 2.8 fewer than he saw last season and a full five shots below what Stoudemire is averaging in New York. Would Stoudemire see nearly the same number of touches in Miami as he’s seeing now? Fat chance.

But stylistically, is Stoudemire a better fit in Miami than Bosh? That’s another matter.

Bosh scores with calculated grace, while Stoudemire scores with a thundering sledgehammer. You can see this contrast in their actions after screens on the ball. After setting a pick, Stoudemire dives directly to the rim for a strong finish. No surprise, but Stoudemire leads the NBA in rolls to the basket this season with 60 to his name. But Bosh? He tends to pivot to the spacious mid-range area for the open jumper and, according to Synergy, he has made more pick-and-pop plays this season than any other player in the league.

So here we have the two extremes in the pick-and-roll game: a roller and a popper. It seems like Stoudemire’s aggressive approach would be the choice; it’s equally efficient as it is entertaining. But rolling to the basket affects the ball-handler, too. As Stoudemire’s primary pick-and-roll partner in this parallel universe, James would likely terrorize defenders even more than he is in his current state.

With Bosh and Zydrunas Ilgauskas as pick-and-pop partners, teams prefer to smother LeBron coming out of the pick, which leaves the screener open for a shot. And James usually delivers the kick-back pass. Teams are picking their poison and it’s better to stop James than to cover a mid-range shooter who at best would hit the shot with 50 percent accuracy.

But a Stoudemire/James combo would wreak havoc on the defense. Stoudemire’s defender can’t show nearly as hard on the screen since Stoudemire demands the utmost attention as he dives. Furthermore, a rolling Stoudemire forces defenses to rotate, which creates more disorder for James to pick apart with his dribble attack and passing skills.

On the other hand, Bosh’s approach has a hypothetical benefit to James as well. Defensive rotations pull the defense out to the perimeter as opposed to drawing them to the paint. James has maintained that Bosh’s ability to spread the floor helps clear the basket area but when it comes to execution, James has exhibited far less aggressiveness turning that corner than one would imagine. It’s not as fruitful as it seems.

And then we must consider what happens in the open court. Would James, Wade and Stoudemire turn every court into Pamplona and pummel teams on the run? Probably. But then again, there’s no catching up to James and Wade on the fly, especially since they get the head start on the perimeter. Transition makes up such a small percentage of the NBA game, but Stoudemire’s ability to run the floor would only amplify what already is a nightmare for opponents to defend.

But Stoudemire’s deficiencies on the other side of the court would wash away much of what he has on Bosh offensively. We saw what the Celtics did down the stretch against the Knicks on Wednesday night. The game plan was clear: Go right at Stoudemire every single time. On two straight possessions, Kevin Garnett got good looks at the rim and beat Stoudemire to crucial offensive rebounds. On the final play, the Celtics drew a play specifically designed to force a Stoudemire-on-Paul Pierce one-on-one mismatch. And it worked. Pierce got all the space he needed on a step-back jumper off the dribble and drilled the clincher right on Stoudemire.

That’s Stoudemire in a nutshell. He’ll win games on offense and lose them on defense. Now, Bosh isn’t a defensive player of the year by any stretch of the imagination, but he’s far more motivated and effective than Stoudemire. Over the years, the two bigs have been lumped in the same group of all offense-no defense post players, but that’s unfair since, compared to Bosh, Stoudemire is comparatively a matador in the paint. In post-up situations, Bosh has allowed just 36 points on 53 shots this season, ranking him among the league leaders with Dwight Howard and Anderson Varejao. Stoudemire? He’s allowed 79 points on 75 shots from the post. And it gets even worse once we compare the two defending off the dribble. This isn’t anything new, either.

To see how Stoudemire’s defense neutralizes his scoring prowess, consider that the Knicks are about 12 points per 100 possessions better offensively with Stoudemire on the floor, but nine points worse on defensive end. Also troubling? No one has been whistled for more fouls than Stoudemire this season (100).

In the end, we don’t know how Stoudemire would respond to having his touches sliced by a third, not to mention the pay cut to make it work. We don’t know if Miami head coach Erik Spoelstra could tolerate his defensive liabilities.

But what we do know is that it’s a fascinating exercise in basketball imagination that draws more shades of gray than black and white. And that Friday night’s matchup in the Garden will be no less intriguing.