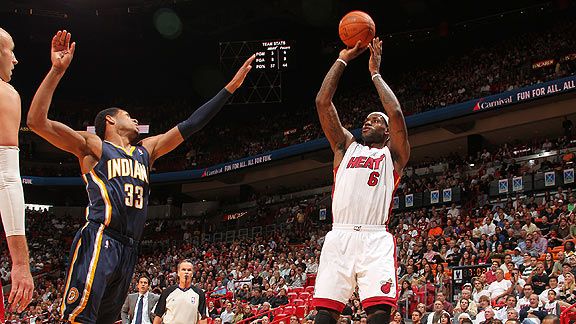 Lure LeBron James into jump shots and you have a fighting chance against the Heat.

The Miami Heat are in the midst of a 12-game win streak and haven’t lost in over three weeks, but they’re far from invincible. Here are three ways to beat the Heat.

The Heat employ two of the league’s most relentless wing penetrators in LeBron James and Dwyane Wade so opposing defenses have undoubtedly had their hands full this season. The best bet for containing James and Wade? Pack the paint and encourage James and Wade to settle for midrange jumpers.

High-powered offenses typically avoid the midrange area for good reason: It’s the most inefficient shot in the game. But curiously enough, the Heat, owners of the fourth most efficient offense in the NBA, launch long 2s more often than any other team -- and by a wide margin. On average, a typical NBA team takes a shot from 16 to 23 feet about once every four field goal attempts (25.1 percent) according to Hoopdata.com. The Heat? Once out of every three (33.7 percent). No team has a steamier love affair with that shot than the Heat, even though the team's worst conversion rate on the floor is from 16 to 23 feet.

And for defenses, this is a very good thing. To be clear, the Heat are one of the best offenses in the NBA despite their midrange frequency, not because of it. But this trend invokes a riddle. Are the Heat taking long 2s because defenses are giving it to them? Or are they settling regardless of the opposing pressure?

Watching the games, it’s a little bit of both. On-the-ball defenders tend to sag on James and Wade, which accomplishes two things: It increases the chances they can stay in front on a dribble drive and the space also invites the midrange jumper.

Defenses would prefer to see James shoot a 20-footer that has about a 40 percent chance of going in rather than watch him drive to the basket where he either draws the foul or finishes at a 70 percent clip. Same goes for Wade. It’s a percentage play.

Even though the Heat are winning with a heavy midrange game, opponents need to stay the course. With Mike Miller coming back, the Heat are going to get only more deadly from downtown, and it’s only a matter of time before James rediscovers the aggressiveness from seasons past. The longer defenses can lure him into long 2s, the better off they are.

Get out and run

How does a defense that starts Zydrunas Ilgauskas and Chris Bosh lead the NBA in defensive efficiency? By implementing bulletproof defensive rotations in the half court.

According to Synergy Sports Technology data, the Heat allow only 83 points every 100 plays when teams engage in their half-court offense. That’s the stingiest rate in the NBA (the average team allows 90 points on average). The Heat don’t have a basket protector like Dwight Howard or Andrew Bogut to anchor the defense, but Miami makes up for it through airtight help defense, by plugging pick-and-roll attacks and by discouraging dribble penetration. If teams manage to get to the basket, they have to shoot over Ilgauskas' or Erick Dampier’s outstretched hands. Or a block by Joel Anthony. All told, opponents are missing 42 percent of their layups at the basket against the Heat, the highest misfire rate in the NBA.

Opponents play into the Heat’s hands when they slow the game down and attempt to beat them in the half-court set. It doesn’t work; Miami’s discipline on rotations is too good. Here’s a better alternative: avoid the half court altogether by pushing the ball in transition.

The Heat were exposed on Friday night when the Knicks turned the game into a track meet in the first half. The Knicks got to the basket with ease off secondary breaks, since the defense didn’t have time to set up and clog the lanes. While the Heat rank first in half-court defense, their transition defense isn’t nearly as impenetrable, ranking ninth in points allowed per play.

Of course, running is easier said than done. It takes defensive stops to get out in transition and the Heat’s wings do an excellent job getting back on defense. But the truth remains: Take away the Heat’s capacity to grind you down defensively in the half court and they’re far more beatable. Expect the Phoenix Suns to take this to the extreme on Thursday night.

Here’s a little secret: Zone defenses have neutralized the Heat's offense this season.

Synergy data tells us that Miami has scored only 66 points on 76 plays against the zone, an efficiency that places the Heat 22nd league-wide.

Throwing a zone at the Heat makes sense. Their two best scorers, James and Wade, are merciless basket attackers who struggle from beyond the arc. Furthermore, despite the clutch 3-pointer on Saturday night against the Wizards, Bosh’s range doesn’t extend to the downtown area. And 3-pointers are the most effective weapons against the zone.

The Heat have seen the zone defense only sparingly this season, but the Mavericks completely befuddled them in their first matchup this season. To beat the zone consistently, a team must use quick ball movement around the perimeter to catch the defense off-balance. Hesitate on swing passes and the defense can recover easily.

Instead, the Heat had James and Wade dribble aimlessly around the court. The offense was littered with shot-clock violations, telegraphed passes and weak pick-and-rolls. All in all, the Heat scored on only 10 of their 34 plays against the Dallas zone defense.

But not every team has the discipline and the training to run a zone defense against the Heat. Only three teams have felt comfortable enough to use it for long stretches against the Heat this season (Mavericks, Nets and Hornets). Moreover, teams have shied away from employing it since it’s been traditionally viewed as a gimmicky crutch.

But so far, the zone defense is the Heat’s kryptonite. And the Mavericks will surely test them again Monday night. Can the Heat make the adjustments?