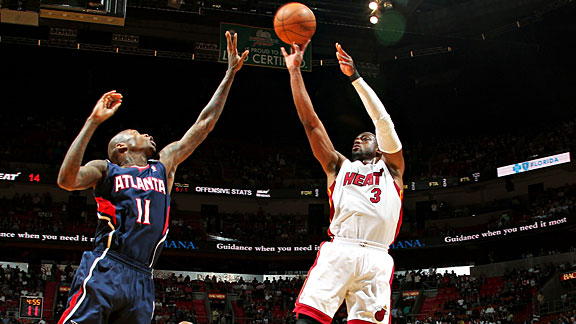 With the Heat banged up, Dwyane Wade will have to carry a huge load on Tuesday night.

The Heat may be short of one of their star players Tuesday night, but the Hawks are adding one. Joe Johnson, the team’s resident max player, missed the Heat-Hawks game in early December with a bad elbow and is now healthy after being tabled for about three weeks. The 29-year-old is an oversized 2-guard who is a terror to stop off the dribble. Keep an eye on Dwyane Wade’s lateral movement after missing practice on Monday since his sore knee will be tested if he decides to play. Johnson can shoot it from anywhere and has a tendency to pull up off an isolation set from the wing. Though Johnson's not an especially gifted attacker in the same vein as Wade, the 6-foot-8 Arkansas product does look for his teammates when the defense collapses. The Heat will look to stay in front of Johnson and deliver help if Wade loses a step, but they can’t spread themselves too thin or else they open up the perimeter for Mike Bibby to drain a 3. And Johnson's washed away all concerns about the health of his elbow after dropping 66 points over his last two games.

Get out and run

Given the speed and athleticism on the Hawks' roster, Atlanta's weak transition defense is a bit of a surprise. Although they were a tad better on Monday against Sacramento, the Hawks saw Houston and Toronto ram the ball down their throats in the open court over the past week. Chalk it up to guards who are lousy at stopping the ball, or just a lack of organization. Whatever the cause of Atlanta's problems, the Heat would be wise to push the ball at every opportunity. Not only are the Hawks on the second night of a back-to-back, but the Heat will have a far less potent half-court attack with gimpy ankles and knees all over the floor. Igniting the fast break requires the Heat to control the defensive glass, something they failed miserably in against both Chicago and Denver. That factor, more than any other, will determine whether the Heat are able to muster easy buckets against the Hawks.

The final score from Dec. 4? Hawks 77, Big Three 75. In the first game between these Southeast Division foes, the Heat depended on the Wade, James and Bosh trio for almost all of the team’s 89 points. But that almost certainly can’t happen again this time around as the Heat are hobbled with injuries. Mike Miller could be the key Tuesday night. The sharpshooter has gotten more burn over the last two games than he has all season and one of the few bright spots from the team’s recent skid. With the Heat likely going without Bosh, Miller’s versatility will be vital to the team’s ability to pick up the slack. While he can’t slide in at the 4, he can take ballhandling duties and push James to the power forward slot. Aside from Miller, the Heat will rely on Joel Anthony and Juwan Howard to help bolster the Heat’s suddenly thin front line. Since those two wield the offensive abilities of a bedside lamp, the Hawks’ defense will have no problem abandoning those two in the half court. No, the Heat don’t need 30 points from the frontcourt, but they can’t all drop goose eggs in the scoring column either like they did in Game 1.

Attack Atlanta in the pick-and-roll

Pick-and-roll defense has been a thorn in the side of Hawks fans for years. Former head coach Mike Woodson opted to have his defenders switch the pick-and-roll. In some instances, it was a sound practice (both Al Horford and forward Josh Smith have the agility to defend smalls quite well), but the tactic often created mismatches opponents could exploit. Larry Drew favors a more traditional show-and-recover strategy on defense, but the Hawks are worse than ever defending pick-and-rolls. Only Cleveland, Detroit and Denver give up more points per possession when opposing ball handlers attack off screens. Wade is probable for Tuesday night's game, and will undoubtedly be the Heat's primary option offensively. If the Heat's big men can offer him enough strong picks and spread the floor with James Jones, Miller and possibly Eddie House, the Heat might find that the best offense against Atlanta might be the simplest.

Erik Spoelstra isn't a coach predisposed toward using a zone defense for extended stretches, but desperation forced his hand during the final two games of the road trip, when the Heat struggled to guard man-to-man. "I felt helpless, I had nothing else and had to throw a prayer out there," Spoelstra said. Curiously enough, the Hawks struggle against zone defenses, and were thoroughly frustrated by -- yes -- Toronto's zone Wednesday when they barely squeaked by the Raptors. The Hawks can be an impatient offensive unit and the zone feeds into their propensity to stagnate. They're good-not-great on the pick-and-roll (Horford the exception), and their starting point guard isn't going to break down a defense or penetrate the zone. Against the Bulls and Nuggets, the Heat's zone was a lender of last resort, but against the Hawks it might help the Heat contend with Horford's post-up game and crafty basket cuts.