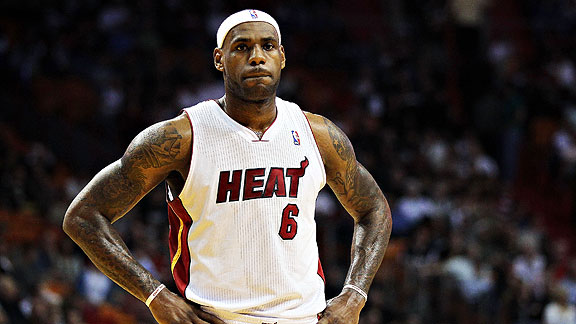 LeBron James' success at power forward has a lot to do with who's playing alongside him.

LeBron James is a guard in skill but a forward in size. So when Heat power forward Chris Bosh missed his first game of the season Tuesday night, it seemed logical to slide James to the 4 and tap into the two-time MVP’s versatility.

And that’s exactly what Heat coach Erik Spoelstra did for long stretches against the Hawks. In all, James played 33 of his 44 total minutes in the overtime game at the power forward position. The unconventional lineup spurred the Heat to an 18-2 run in the second quarter, but it also suffered through rough patches at the conclusion of the first and third quarters. For the game, LeBron-at-the-4 lineups outscored the Hawks’ units by one point.

But is that success a one-game blip or part of a wider trend this season? And what about his time in Cleveland? Moreover, does James even have the post-up game to emulate a traditional power forward?

Let's break it down.

LeBron at the 4 in Miami

With over half of the Heat’s season in the books, we have watched Spoelstra deploy James at the power forward slot at several junctures, and the results have been interesting.

But dig deeper and we find that who plays the 5 in these lineups has a large effect on its success. More specifically, Bosh makes it very much worthwhile.

LeBron at the 4 in Miami

So here we see that lineups with James and Bosh manning the frontline have been remarkably effective, outscoring opponents by nearly 15 points every 100 possessions. This configuration’s offense is just about unstoppable; the Heat have scored 97 points on 79 trips down the court (its 122.8 offensive efficiency is 14 points better than the Heat norm).

But there’s a tradeoff. The defense gets less stingy with James and Bosh holding down the fort. In fact, when Anthony tags along with James down low, the defense has been about 10 points per 100 possessions better. (Helpful reminder: When talking about defensive efficiency, a lower number is better. Think of it like you would a golf score.)

Take notice of the stark change in the Heat’s strengths. With Anthony, the Heat still manage to be a top defensive team even with James playing “out of position.” But the offense suffers. And with Bosh in there at the 5, the Heat become on offensive juggernaut. Give up 10 points on defense, add 21 more on offense.

Given Bosh's and Anthony’s vastly different skill sets, this shouldn’t be a total surprise. But to see it illustrated so acutely in this half-season breakdown reminds us that simply putting James at the 4 doesn’t guarantee a certain brand a basketball. It depends on who’s flanking him.

While the sample size is limited, the success of lineups with James at the 4 seems to hinge on the center position. And if we look back even further into his days as a Cavalier, we see a similar trend.

LeBron at the 4 in Cleveland

Earlier this season, when Heat forward Udonis Haslem went down with a foot injury, I ran the numbers to find out how the Cavaliers looked when James slid to the 4. What did I discover? When Varejao played the 5, the Cavaliers were off-the-charts good. Like, outscoring opponents by nearly 30 points every 100 possessions good. Both offense and defense was stellar with the gritty Brazilian. But with Shaq? The Cavs were terrible. Same with Zydrunas Ilgauskas, whom Spoelstra has been very reluctant this season to pair with James at the 4. And that's probably not a coincidence.

Here are the illuminating numbers:

LeBron at the 4 in Cleveland

So how do we reconcile this information with what we know about the Heat? For one, the Heat don't have a player like Varejao who can run the court, score when you need him to, help out James defensively and seamlessly guard opposing centers. Granted, Bosh does most of those things well. Anthony does some of those things sufficiently. But Varejao does it all exceptionally.

And it's instructive to look at Ilgauskas' numbers. Pairing a lumbering center with James at power forward is like asking Usain Bolt to run the 100 meters while dragging a mid-size sedan. There's a reason Erick Dampier and Ilgauskas have been used sparingly with James at the 4.

But in these lineups, is calling James a power forward just an empty designation? Can he play on the block?

Finding deficiencies in James' all-around game sometimes feels silly. After all, he's already the most talented player in the league at age 25 and has been for quite some time.

James' game may be extraordinarily versatile but it is not laterally complete. If he puts his back to the basket, he suddenly doesn't look as confident with the ball. But data suggest that we may be overexaggerating his ineffectiveness on the block.

Synergy Sports' scouting reports generated from video breakdowns tell us that James has scored 42 points on 48 post-ups this season, an efficiency that ranks 40th among the 71 players with as many plays down low as James. For the sake of comparison, Paul Pierce ranks third and Kobe Bryant 19th.

But last season, James fared far better on the block, perhaps due to familiarity and continuity within the Cleveland offense. He scored 1.14 points per post-up last season which ranked first among the 55 players that matched his attempts and that included Bryant and Pierce.

So James certainly has the potential to be a great post-up presence and he's shown impressive results, but he tends to shy away from the block. The post-up game represents only 4.5 percent of his overall offense, which pales in comparison to some of his wing contemporaries. For reference, Bryant goes there four times as often. Now, part of that is due to offensive schemes, but it's also a testament to preference.

In Tuesday night's loss to the Hawks, James rarely put his back to the basket and ran limited pick-and-rolls as the screener, despite playing the role of the big man. He hasn't fully embraced what it means to play the 4 in conventional terms but he's not a conventional player, either. There's still plenty of room for him to grow as a player -- and that's a scary proposition for the rest of the league.