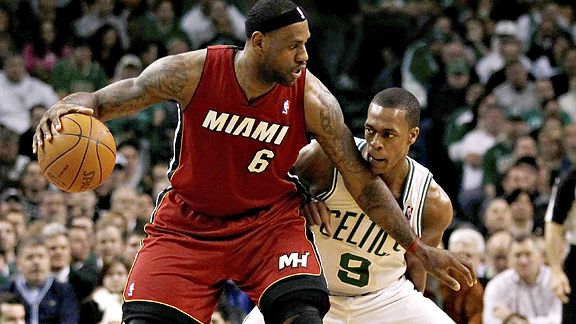 The Celtics made their big third-quarter run with Rajon Rondo guarding LeBron James.

Within the "5 things" Kevin Arnovitz and I posted before the game, we noted that we might see LeBron James defend Rajon Rondo for long stretches in Sunday’s game.

Well, as it turned out, Rondo got the assignment on LeBron for long stretches -- not the other way around.

At the 9:45 mark of the third quarter, with the Celtics up by three points, Celtics coach Doc Rivers switched up his strategy on James after Mike Miller entered the game for Mario Chalmers. This is the “point-less” Heat lineup that was supposed to cause matchup hysteria for opposing defenses. And to the surprise of many, Rivers reacted by sticking Rondo on James, who has nearly 100 pounds on the Celtics point guard.

So what did James do? He immediately brought the ball up the floor and started posting Rondo up at half court.

Recognizing the enormous size mismatch, James backed Rondo all the way from half court down to inside the 3-point line. At this point, Celtics center Kendrick Perkins saw that James easily backed Rondo down for 30 feet across the length of the floor and decided to rotate from the weak side to trap James in the corner. James scurried out of the pressure and passed to Chris Bosh for a jumper, who was fouled by Kevin Garnett on his way up.

It appeared Rondo needed help guarding James. But nonetheless, Rivers maintained faith in his point guard who was selected to first team All-Defense in 2009-10.

On the next Heat possession, it’s more of the same. Rather than pick up James at half court, Rondo hounded him as soon as he took the inbounds pass under the opposite basket. Once again, James turned and backed him down. This time, James did so at the 3-point arc and forced Garnett to double-team him. James passed out once the help came and tried to re-post against Rondo.

Then the lockup happened -- one of the more memorable moments of the game.

Even though James had previously overpowered Rondo, the Boston point guard refused to let James get good positioning on the block and locked arms with the two-time MVP for several seconds. Rondo stood his ground to prevent James from going anywhere. Rondo successfully deterred the first entry pass from Bosh until James finally wrestled free and received Dwyane Wade’s pass.

And once again, we saw why this might not be the best defensive strategy for the C’s. As James had Rondo on the left block, Perkins and Garnett came to Rondo’s aide, opening up the weakside corner for Mike Miller to camp out. James saw the flood coming and fed Miller for the uncontested 3-pointer. (Actually, it was contested if you count Von Wafer leaping from the bench to scream in Miller’s ear).

Miller missed the wide-open shot, but the Celtics' defense rarely surrenders those kinds of looks. In the process-over-results mode of thinking, that’s not a successful defensive possession for the Celtics.

The surprising decision to assign Rondo to James got inside the Heat players’ heads too, but probably not in the way Rivers envisioned. On the fourth possession with the full-court cross-match, James brought up the ball again saddled by Rondo, but this time Zydrunas Ilgauskas leveled Rondo on a legal screen as the ball crossed the half-court line. The hit knocked Rondo down to the floor, but he immediately stood up and wrapped up James at the center of the court for a foul call.

“Come on, Perk,” Rondo yelled at his teammate, who failed to alert Rondo that Ilgauskas was setting the screen.

But the Celtics would get their revenge. On the ensuing Celtics possession, Garnett laid out Miller on a similar blindside screen, which then prompted Wade to give Garnett a two-handed push later in the possession. Wade got whistled for a flagrant foul and Garnett then hit two free throws.

The game got testy at that point and it was all started by Rondo hounding James up and down the court. And Rivers apparently liked what he saw, because he kept sending his point guard to defend James.

With the deficit ballooning to 13 points, the Heat went back to James on the block to take advantage of the mismatch. And for a third time, Perkins left Ilgauskas underneath to put a hard double-team on James. Bad decision. James saw it all the way, and delivered a beautiful behind-the-back bounce pass to Ilgauskas under the basket. Helping from the top of the key, Garnett tried to block Ilgauskas’ layup but fouled him in the process, sending Ilgauskas to the line for the and-1 opportunity.

And wouldn’t you know it, on the next Heat possession, they went to LeBron on the left block again. But instead of sending the double-team, which left the defense exposed several times already, the Celtics changed their approach -- they let Rondo try to stop James in the post all by himself.

But it didn’t work. James pummeled Rondo into the paint and the 170-pounder couldn’t do anything but foul James as he turned his left shoulder to the rim. James made the layup, marking the second straight and-1 opportunity surrendered by the Celtics.

As the lineups changed over the rest of the third quarter, we didn’t see a Rondo-on-James matchup again until the final possession of the third quarter. And this one was particularly fascinating because, even with Eddie House on the floor, Rivers elected to have Rondo cover James. Not Paul Pierce. Not the taller Von Wafer. Rondo.

With the shot clock ticking down from 10 seconds, Rondo attached himself to James’ hip as they stood at center court. James palmed the ball with his right hand, holding it as far away from Rondo as possible, then turned and attacked. Rondo successfully stayed in front of James as he executed a spin move into the lane. But that drew Von Wafer to shade off of House and, once again, James delivered the ball to the open man. House launched the 3 -- from the exact spot where he hit the game winner against the Thunder just days ago -- but he missed.

The quarter ended as Boston extended the lead to 13 points. That was the end of the Rondo-on-LeBron showdown on Sunday. Miller barely played in the fourth quarter, which enabled Rivers to trust Pierce on James thereafter.

Was the unconventional move a success? If you gauge it solely by the scoreboard, yes -- that was when the Celtics made their big run.

But it’s hard to imagine the Celtics could duplicate their success in the next Celtics-Heat matchup. James is blessed with incredible floor awareness and routinely crushes defenses when they send an extra man to double-team him in the post. And he did it on Sunday.

When James wasn’t setting up and-1 opportunities, James found Miller and House wide open on the perimeter. The Celtics were lucky that Miami didn’t convert on its golden opportunities. Otherwise, we may have seen a different outcome in the game.

Ultimately, Rondo guarding James provided riveting theater during a matchup that was already loaded with fireworks, while adding yet another wrinkle to the budding rivalry. We’ll probably see it again next time around, but don’t be surprised if the overall results change.