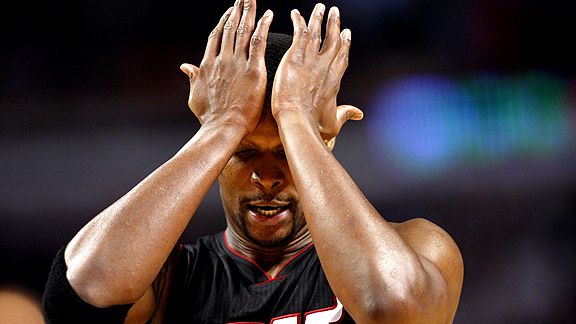 Chris Bosh might want to forget this one, but he and the Heat have a lot to learn from their loss at Chicago.

The Heat lost a close one 93-89 to the Chicago Bulls on Thursday at the United Center. Here are three reasons the Heat lost and how they can improve in the future.

Chris Bosh missed 17 of his 18 shots from the floor against the Bulls on Thursday night.

Let that sink in.

Needless to say, it was ugly. But it didn’t have to be. In the Heat’s to-do list that I wrote coming out of the All-Star Game, I noted that Bosh had migrated to the perimeter this season, dampening his overall efficiency as a result. When the Heat bring up the ball, coach Erik Spoelstra has planted Bosh on the right elbow to facilitate the offense and space the floor, so Bosh’s court orientation isn’t completely his own doing. However, once he receives the ball on the elbow, the choice is his: attack, facilitate or shoot. And more often than not, he has settled for the latter.

He certainly settled Thursday night. Take a peek at his shot chart. You’ll notice that 11 of his 18 field goal attempts came outside the paint. Some of those shots were missed jumpers that Bosh normally drills, but there also were plenty of forced pull-up jumpers taken outside the flow of the offense.

Now, Joakim Noah deserves a wealth of credit for smothering Bosh all night and making it tough for Bosh to navigate to the rim. The Bulls decided to cross-match their frontcourt defense from the opening tip, putting Noah on Bosh and Carlos Boozer on the offensively challenged and similarly dense Erick Dampier. That arrangement seemed to neutralize the Heat’s post attack. But Bosh didn’t exhibit any urgency to challenge Noah off the dribble, and that passivity might have cost Miami the game.

With 2:28 left in the first quarter, the Heat ran a beautiful set that saw Eddie House curl off a set of staggered screens for a silky midrange jumper. That was the last time a Heat bench player scored in the game.

Bosh is an easy target, but the Heat easily could have survived his historically cold shooting had the bench shooters decided to show up. On the night, Miami’s reserves totaled all of two points on 1-for-8 shooting from the field, including 0-for-5 from downtown, in 46 minutes of action.

With Mike Miller sidelined with an ear infection, the Heat were forced to rely on House and James Jones to knock down perimeter shots and provide some scoring punch alongside the big three. And against this Bulls defense that loves to load up on the strong side and pack the paint, 3-point shooters are absolutely critical to the Heat’s success. Without them, the defense can stay tight and inhibit Dwyane Wade and LeBron James’ penetration into the lane. If the shots are going down, it forces the defense to stretch and open up the seams. In many ways, the shooters hold the key.

LeBron tosses away the trust

Perhaps we should have seen this coming. After hearing Derrick Rose garner MVP chants from the home crowd all night and watching the point guard (his defensive assignment for some key possessions down the stretch) dish off to Luol Deng for the go-ahead 3-pointer with seconds left on the clock, LeBron might have felt the need to win the game all by himself.

He certainly tried. With 16 seconds left on the clock and the Heat down three, James received the ball at the top of the key with Deng guarding him. Following one quick dribble to his left, James launched an off-balance, fadeway 25-footer not two seconds after touching the ball. It bricked off the side of the backboard, sealing the victory for Rose and the Bulls.

Spoelstra drew up a play, and James just put his head down and took the ill-advised shot. This was on him.

Earlier this season, James showed trust in his teammates in these late-game situations, making winning plays at the expense of his own spotlight. He did it in Boston. He did it against Detroit. And he did it in Oklahoma City earlier this month. But for some reason, he threw it all away for the glory of tying the game himself. He knows better, but he let his emotions get the best of him.