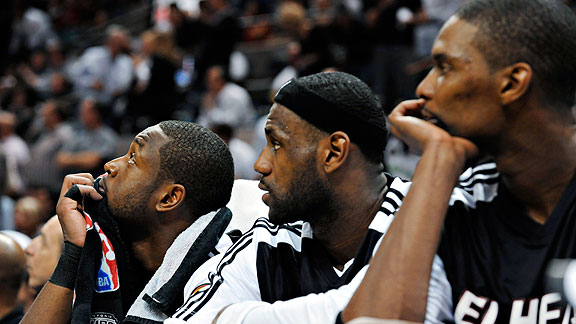 The Heat's Big Three aspires to be the Spurs' Big Three.

MIAMI -- In Miami, the white noise often reaches a deafening pitch and the scrutiny has provided plenty of distractions. In San Antonio, the relative silence and minimum surveillance by the national media have not only been welcomed, they've been essential elements in developing a recent dynasty.

And that's made the working environments for the Heat and the Spurs about as different as South Beach and the Riverwalk.

“They can focus on what's real -- getting better and preparing to compete for an NBA championship,” Heat coach Erik Spoelstra said of the Spurs, who visit AmericanAirlines Arena on Monday. “That's what we're doing as well. But there are so many distractions every single day. New headlines. New stories about anything but that. We're trying to get better. For us, we're in a different situation than San Antonio. Completely different.”

In many ways, the Heat envy the Spurs.

Sure, Miami has all the hype, fueled by the offseason free-agency makeover that brought in LeBron James and Chris Bosh to join Dwyane Wade. But San Antonio has the championship history, having won four titles in a span of nine years -- or, the sort of wishful-thinking rate James counted off during the Heat's signing party last July.

And, yes, the Heat have dominated the national dialogue around the league this season, with everything from last week's CryGate episode to naming themselves the "Heatles" leading all the sports news programs. But the Spurs have countered Miami's style with a substance that has produced the league's best record for most of the season, and they stand at 54-12 entering Monday's nationally televised game.

The last time the league's most polarizing team met the NBA's most productive squad, it wasn't even a contest. The Spurs handed the Heat their worst loss of the season, a 125-95 thumping that quickly got out of hand and underscored a meaningful difference between the teams.

The Spurs are a refined product, with veterans Tim Duncan, Manu Ginobili and Tony Parker having gradually cultivated a level of chemistry that James, Wade and Bosh can only aspire to reach while toiling through the infant stages of their own development.

The Spurs are proving this season that the old formula for constructing a team still works.

They've developed lottery picks such as Duncan and David Robinson into Hall of Famers. They've outsmarted many other teams by snagging Parker and Ginobili with later picks in the draft and turning them into perennial All-Stars. They've reinforced franchise anchors with an overachieving youthful supporting cast in DeJuan Blair, Gary Neal and George Hill. And they've supplemented the roster by bringing in veteran specialists Richard Jefferson, Antonio McDyess and Matt Bonner.

As a result, the Spurs have positioned themselves to make at least one more stand. As it is, they're in position to make sure the route to an NBA championship runs through the Alamo City.

Despite all their success this season, the Spurs have remained under the radar while much of the attention has been on Miami's makeover, the Los Angeles Lakers' pursuit of a third consecutive title, Boston's rebuilding on the fly around its Big Three and Blake Griffin's breakout redshirt rookie season.

Whereas the hype and scrutiny have at times been suffocating for the Heat -- with much of the national mocking and nitpicking brought on themselves -- the Spurs have worked through their few kinks in relative obscurity.

While the Heat's mistakes have been magnified under the media spotlight, the Spurs have had the space to grow. Wade said the Spurs don't get as much attention because they aren't perceived as a “sexy” team with exciting players.

“But it's just a perception,” Wade said, who also believes the silence around the Spurs has been a blessing in disguise. “It can be a benefit, from the standpoint of there not being as much pressure during the regular season, to focus and get things right that you need to. When it's time to hit the playoffs, you're a good team, you know your game and you can go in there and win championships like they have. When you go through a lot of preseason and regular-season hype, attention, it adds a different kind of pressure to your team. It doesn't allow you to all the time keep growing and not worry about what's being said all the time. But you have to win no matter what.”

The Spurs have been able to shine this season, even without the spotlight.

“They're a four-time champion, and every year they're there,” Spoelstra said. “We've always had the ultimate respect for them. They've outclassed everybody in the league to this point.”

Spoelstra also said the Heat are trying to “fast-track” a development process that the Spurs were able to reach through trial and error over the course of several seasons.

“Their main core has been together so many years, so they've been tested through adversity,” Spoelstra said. “They've been through playoff battles. They've been through all the ups and downs that connect you and bring you closer as a group, which brought an incredible amount of trust. We're fast-tracking that right now. The quickest way to do that right now is to have setbacks. It forces you to be honest and figure out exactly what you need to improve. And that's what we're doing now.”

Credit the Spurs for aiding in that process for the Heat. They handed Miami its worst setback of the season two weeks ago in San Antonio, where the Spurs quickly built a 24-point lead in the first half and set a franchise record by making 17 3-pointers.

The March 4 loss came in the middle of a season-long, five-game losing streak for the Heat, who since have recovered with strong defensive efforts in consecutive victories over the Lakers and Memphis Grizzlies. Miami has held those past two opponents to below 90 points and 41 percent shooting.

“It all starts defensively,” James said of the Heat, who had a season-high 11 blocks against Memphis. “When we get defensive stops, we're good offensively. We've held two teams under 41 percent the last two games, and it's resulted in us executing throughout the entire game.”

That type of balance on both ends of the court has also been part of the Spurs' blueprint for success. That's one of the few things the teams have in common this season.

But one team gets most of the hype and headlines. The other is just fine without the hassle of hoopla.

“They've always been a solid team, a blue-collar, hardworking team,” said Bosh, who grew up in Texas and is still surprised the Spurs don't get as much attention as their success should warrant. “If people don't give them praise, I don't ever remember those guys complaining too much. They just do their job and go home. Sometimes, [with] the spotlight, there can be pros and cons with that. But a champion is a champion. They're former champions and they're trying to do it again.”