MIAMI -- After the Heat's third consecutive victory, LeBron James was in particularly good sprits. When a member of the media asked him to describe what it feels like to dunk, that further elevated his mood and had him reaching for metaphors. 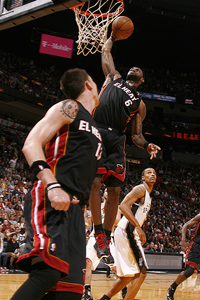 LeBron's first dunk came against the teachers of Riedinger Middle School in Akron.

The way LeBron occultized "the dunk" invited the question: When did he first dunk a basketball?

His response was as reflexive as it would've been had you asked him his birthday.

"Do you remember the time?"

After a pregnant pause, James asked, "You want the story?"

James then looked at his watch, for effect as much as the time. He and Wade had spent 12 and a half minutes behind the microphone. With an 8:00 p.m. start in Miami, deadlines for most of the print reporters had long since expired.

There's a collective laughter from the room.

"It was a middle school game. It was teachers versus students, and I got a fast break on the teachers."

"This isn't funny. This is serious, man! I went to Riedinger Middle School in Akron, Ohio! I got a fast break and this was the first time I ever even tried it. I said, 'I'm going for it.' When you first start dunking, you go to the very -- "

James gestured with his hand, reaching out to an imaginary goal. Illustrating something as bio-mechanical as a dunk with words is difficult, so Wade jumped in.

"All the way to the corner," Wade said.

"All the way to the corner! The side of the rim. That's, like, the easiest one to get when you first start dunking."

After all the descriptive flourishes, LeBron's voice drops a level and his tone becomes more earnest. He seems surprised by how much sentimentality the story evokes for him. Wade has stopped chuckling.

"It was definitely ... It was an unbelievable moment for myself when I realized I could dunk."

Did the teachers fail him?