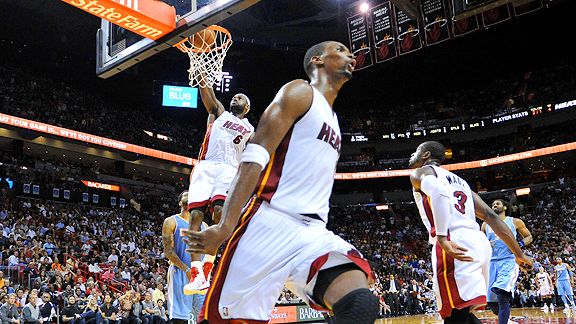 The Heat's Big Three led the way against Denver, wrapping up a stretch with mixed results.

MIAMI – The Miami Heat figured March 19 was going to be a key evaluation point in their season, the last of an 11-game run against likely playoff teams that was to test their potency and their legitimacy.

Saturday night they had a choppy 103-98 win over the Denver Nuggets, a game that lacked great execution but showed off some serious star power. In the end, the Heat came out slightly ahead but couldn’t feel really great about it, partially because starting point guard Mario Chalmers went down with a sprained right knee that could be severe depending on tests coming Sunday.

Not ironically, the Heat feel the same way about that 11-game gauntlet. They finished up 5-6 in the stretch, which probably would not have earned a favorable grade three weeks ago. But with wins in five of the last six games including a wins over the Los Angeles Lakers and the San Antonio Spurs recently, they hit the finish line feeling like they’d accomplished something.

“It’s been a tough stretch, a lot of ups and downs,” said Chris Bosh, who contributed his fifth consecutive double-double in the win with 18 points and 11 rebounds.

“After the smoke cleared, I think we’ve been better and are a better group now. We’ve seen a little bit of everything. We’ve seen the highs, we’ve seen the controversy, we’ve seen a bunch of different things that we’re going to see again. So when it rears its head again we’ll be prepared.”

That is the Heat’s party line at the moment, but it may not be wrong. The victory over the Nuggets, who came in 9-3 since trading Carmelo Anthony, was a quality one and the Heat survived a comeback attempt late. In losses to the Orlando Magic and New York Knicks at the start of this test, the Heat melted when they gave up double-digit leads in the second half.

This time when the Nuggets made their run, cutting a 16-point lead to four with nine minutes to play, the Heat answered with aggression instead of uncertainty to finish it off. LeBron James and Dwyane Wade made sure of it, combining to score 17 points in the fourth quarter as the Heat won one of those oft-troublesome games that was decided by five points or less. James finished with 33 points, Wade with 32.

There’s no use referring to that 5-6 record as positive because it simply fell short of the team’s expectations, especially considering nine of the games were at home. The five-game losing streak that included blown leads and “crygate” may end up costing the Heat homecourt advantage in the second round of the playoffs when it’s all added up. There’s no need to go over the tired ground of the late-game failures and the catalog of James’ big misses -- obviously it was a sore point.

But saying the Heat won’t benefit from suffering those defeats would perhaps be shortsighted. In the midst of the struggles, Bosh stunningly demanded a greater role in the offense in a mixture of complaining about his role and issuing a public challenge to himself. He got it and has delivered over the last six games, playing his best stretch of the season.

The team has also improved in an area that has been its Achilles' heel, which is halfcourt offense. It hasn’t been seamless but there’s no doubting there has been improvement. James and Wade especially have begun to find some new cooperation with the long-awaited unveiling of the two running pick-and-rolls.

There’s also been the integration and establishment of Mike Bibby. After five forgettable and impactless games since he joined the team, Bibby has shot 53 percent over the last six games and averaged 8.1 badly-needed points off the bench. Getting him settled and contributing appears to be needed now with Chalmers looking like he’s going to be out for awhile.

All of those facets are tangible results against serious competition with real pressure and the Heat are holding onto that as the enter the final 12 games of the season.

“Going through those struggles helped our group, you have to go through a lot of pain to go through [the losses],” Heat coach Erik Spolestra said. “It’s not something we’d like to duplicate but it forced us to be very honest with ourselves and make the appropriate changes in our game. We’ve certainly made progress.”