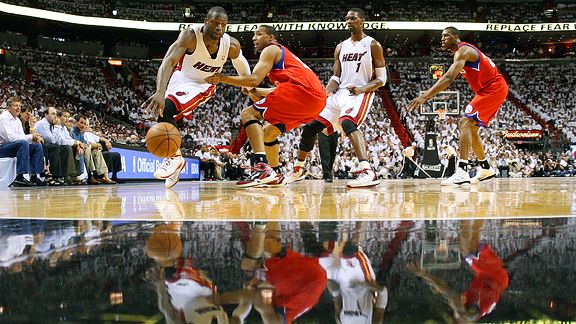 While the Sixers' defense has zeroed in on Dwyane Wade, Chris Bosh has picked up the slack.

How can the Heat exploit the Sixers' Wade Containment Plan?

After assigning Andre Iguodala to guard Dwyane Wade down the stretch in the crucial possessions of Game 1, Philadelphia coach Doug Collins became even more determined to keep the ball out of Dwyane Wade's hands in Game 2. The Sixers' traps on Wade never stopped coming -- from the strong side, weak side, bottom or top of the Sixers' defense.

Did the tactic work? If you look at Wade's stat line, you could argue “yes.” Wade, who was recovering from migraines, finished with 14 points on 4-for-11 shooting and coughed the ball up five times against only two assists. On the other hand, Collins' implicit strategy was to make James and Bosh beat him -- and beat him they did. The other two-thirds of the Big Three combined for 50 points on 38 true shots (field goal attempts and shots that result in trips to the stripe).

Addressing the matter on Wednesday, Spoelstra said that Philadelphia's blueprint reminded him a lot of what the Heat had seen from Boston this season.

"They'd been committed to taking the ball out of his hands all year long, and in the final game he was committed to being a playmaker," Spoelstra said of the Heat's last regular-season meeting with Boston.

Wade's line that afternoon was remarkably similar to his Game 2 numbers (Wade finished 4-for-12 against Boston for, you guessed it, 14 points). But he also generated eight assists, finding shooters on the perimeter and teammates for handoffs. Against Philadelphia on Monday night, Wade wasn't as distributive, but the Sixers might have been even more aggressive than the Celtics, which is remarkable.

"He's not forcing the issue," Spoelstra said. "He's playing with incredible poise. When [the 76ers] have two on the ball, he's moving it and we play out of the numbers advantage wherever we can."

Ideally, Spoelstra said, Wade will serve as an "aggressive decoy," which is very difficult to do. If Wade can keep his blind jump-passes down and reverse the ball out of the double-team, the Heat should be fine. But the responsibility isn't entirely Wade's. The Heat have to exploit the Sixers' 3-on-4 zone behind Philly's traps because that "numbers advantage" Spoelstra spoke of is only an advantage if the ball moves to the open guy.

On the first possession of Game 2, the Heat ran a play to isolate Chris Bosh on the right block against Elton Brand. Bosh faced up toward the basket, quickly dribbled to a post-up, and pivoted for a lefty hook on the block. Easy bucket.

If the Heat were going to establish Bosh that early and that fluently, it seemed the Sixers would be in for a long night. The Heat subsequently pummeled the Sixers by 21 points.

It looks like the Sixers have drawn up a list of priorities, and stopping Dwyane Wade sits atop that list, which makes Bosh even more pivotal on the block. In his first two playoff games in a Heat uniform, Bosh has been the Heat’s rock, averaging 23 points on 65 percent shooting plus 11.5 rebounds. The power forward has always had the potential for production of this magnitude, but his assertiveness was fleeting.

Not anymore. The Heat are clearly looking to exploit the slower-footed Brand on the block, and Bosh is responding with aggression, not the tentativeness he displayed earlier this season. After attacking Brand on the first possessions, the Heat went at him again a few possessions later, having Bosh seal him on the right block for the post-up. After LeBron hit Bosh with an entry pass, he turned and shot a fadeaway midrange jumper. His shot was off target, but the Heat’s game plan was explicit: Get Bosh the ball early and often. Bosh continued working on the block throughout the game and the Sixers couldn’t contain him, even with the quicker Thaddeus Young getting the assignment.

In effort to grab the 3-0 lead, look for the Heat to continue pounding the ball in to Bosh. If the Heat can get the Philly defense paying extra attention to Bosh early, it opens up the entire Heat offense, by displacing pressure off LeBron and Wade. If the Heat move away from that game plan, the Sixers can double up on the wings without consequence.

Will the Heat keep the Sixers' transition attack at bay?

Whether it's his background as an analyst or his downstate Illinois plainspokenness, Collins is one of the most revealing coaches you'll find in professional sports. He'll not only communicate precisely what he's thinking, but he'll tell you what his opposing coach is thinking. Frustrated after watching his team's Game 2 performance, Collins explained the dynamic of the series from the podium.

"If you go in and look at [the Heat's] board, I guarantee you Erik Spoelstra has said, 'If we don't let this team run and we get them in the half-court game, then we'll probably do a pretty good job defensively," Collins said.

Spoelstra has said as much, citing the Sixers' athleticism and motor as the one facet of the series he's most concerned about. The Heat took that message to heart in Game 2, allowing the Sixers only eight fast-break points -- and half of those were scored in garbage time. You could see the Heat on alert throughout the night. Although Joel Anthony hung around the offensive glass, the Heat's perimeter players sprinted back the moment a Miami shot was fired. That strategy helps the cause, but protecting the basketball will always be the most reliable way to contain the Sixers' fast break. On Monday night, the Heat turned the ball over only seven times in the first three quarters.

Finally, the Heat should continue to attack the rim and draw contact. When Philadelphia is forced to walk the ball up the court after a made free throw, that athleticism isn't nearly as dangerous.

Are the Heat subtly regressing into old habits?

The Heat have been close to perfect in execution during the first two games, but the offense has some room for improvement, specifically when it comes to where they’re getting their shots.

After Wednesday’s practice, Spoelstra expressed some disappointment with his team’s production in the points-in-the-paint column and doesn’t want to get away from what makes the offense hum: attacking the rim. When the Heat were in their early-season swoon, they settled for jumpers. When they bludgeoned opponents at the end of the regular season, they penetrated and pounded the basket. They need to get back to that.

The Heat haven’t been hitting their 3-point attempts with regularity and it may be causing their sharpshooters to creep closer to the basket. James Jones, Eddie House, Mike Bibby and Mario Chalmers have combined for 12 long 2 attempts in the first two games, and the Heat would probably benefit from moving most of those attempts a few feet back beyond the arc. They’re out there to stretch the floor from downtown, not live in the midrange area.

All in all, the Heat are launching 50 percent more long 2s here in the playoffs than they did in the tail end of the season -- when the offense soared. Heat opponents pack the paint and lock down the perimeter in order to entice Miami’s scorers into the midrange, which is a dead zone for efficiency. The Heat have shot 51 percent on their 47 long 2s this postseason, but they have to resist falling in love with the shot. Nailing 51 percent on 20-footers isn’t sustainable, unless you’re a team full of Dirk Nowitzkis. April isn’t the time to revert back to November habits.

Can the Heat step on the Sixers' throats?

It's a rite of spring:

Virtually every team in NBA history that has won the first two games of a best-of-seven series has stood in front of the media just hours before boarding a plane and insisted that they won't take their foot of the pedal as they hit the road for Game 3.

If the Heat actually grind out a win on Thursday night, they'll not only defy historical trends, but also accomplish something a lot of folks feel they can't on a consistent basis -- harness their sheer talent to crush the spirit of an opponent. Going into the season, there was an expectation of dominance from the Heat. If the team played with precision and poise, their collective skill set could bury teams, even good teams. But if you peruse the Heat's 2010-11 results, that didn't happen very often. Miami certainly took care of business against the have-nots, but the Christmas Day beatdown of the Lakers and the big win over Boston for the No. 2 seed were the exceptions sprinkled around a successful, but underwhelming, 58-win season.

Here's the thing about the postseason: Dominance can be achieved in an instant, and a team's persona can turn on a dime. If the Heat can replicate their performance from Monday night, feed Bosh down low, keep James on the move, find 20 transition possessions they can turn into approximately 35 points and leverage the Sixers' attention on Wade, they'll be able to put even more distance between themselves and those regular-season question marks.