Why LeBron James always 'chokes'
10yEthan Sherwood Strauss
NBA preview: Everything you need to know for the 2021-22 season
Atlanta Hawks
17h
It's opening night, but our NBA experts are already making their championship picks
17h
Apr 26, 2011 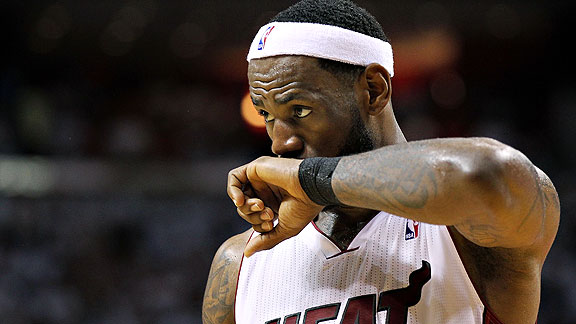 For many fans, there's only one explanation for why LeBron James loses a basketball game.

This Heat season will likely end in failure, which means death by choking. I say that because championships are elusive and media labels are predictable. Though I would favor Miami as a title pick, “the field” is a more imposing team than Pat Riley could ever build.

Jump forward to Heat elimination and see LeBron’s shoulders drooping to the level Dwyane Wade’s head hangs. Miami trudges off the court, off into the vagaries of lockout oblivion.

They leave behind a blue Twitter cloud of snickering scorn. Pundits rush to agreement: The opposing team’s best player is what LeBron isn’t and what LeBron should have been. Sportswriters light a fire beneath Erik Spoelstra’s seat before the coach even slumps into a post-series presser. It’s a disaster, much to the delight of the chattering classes.

And LeBron James will be the “choker.” That narrative already exists -- last year’s exit gave us that framing device. The thinking went: James either choked because he quit or quit because he choked.

“Choking” means to shrink from the moment, to be crushed by its pressure. It’s quite at odds with “quitting,” a sin of apathy. Quitters and chokers might be different creatures, but the pejorative terms aren’t really about who does what or why they do it: The labels seek to impugn the masculinity of losing players, as though the NBA is some elaborate test of manhood.

Schadenfreude amplifies such criticism. If more observers wish to see a player fail, then more of them will seek to emasculate him for those failings. A spiteful fan can take pride in being manlier than a large, famous athlete on the TV -- at least mentally. Sure, LeBron is better than you at sport … but he lost due to a feminine character flaw! This is a funny way to retroactively judge why a ball went through a hoop, but it is a persuasive formula.

A title victory protects an athlete. Don’t have a ring? Likability is the next best defense. If fans identify with a star, they’re less inclined to impugn him. Steve Nash has eluded the cruel “choker” tag, despite many playoff exits. My assumption is that sportswriters and fans are more likely to empathize with someone who looks like them. It helps that Nash plays a beautiful game and exudes charisma. So, it makes sense that much of the media narrative surrounding him revolves around how the Suns have failed him -- not the other way around.

LeBron James does not look like most media members, or a majority of the fans. He irritated significant numbers with the tone-deaf Decision and what many felt was a power play. The angry masses were further enraged by the local celebration of Miami’s free-agent haul. Should LeBron fail, should his team fail, mockery will write history.

“They brought this on themselves,” is a common refrain, used to justified our screeching derision of tears and “softness.” Perhaps James and his team deserve future embarrassment, but let’s not confuse a desire to shame with honest analysis. If the Heat lose, it will probably happen due to flawed strategy, a lack of execution and a little bad luck.

But in the imagination of many, LeBron will have “choked” because the story people want often overrides reality. To quote Maya Angelou, “people will forget what you did, but people will never forget how you made them feel.”