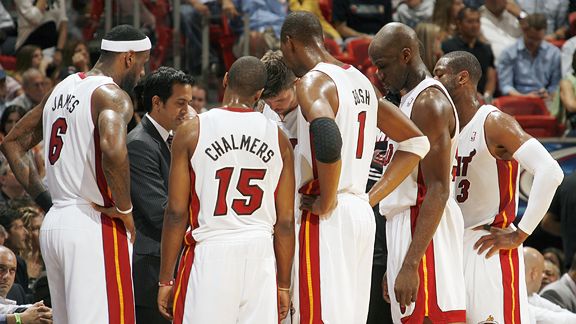 This lineup might be Erik Spoelstra's favorite five-man unit in this series, but we have barely seen it against Chicago so far.

The much-anticipated Heat versus Bulls matchup is finally here. As we all prepare for the series that will decide who goes to the Finals, we’ll be constantly reminded of the Heat’s 0-3 record against the Bulls this season.

On the surface, this sounds like a big deal. Of the Heat’s 24 losses this season, three came against the Bulls, but none of Miami’s 58 victories were over the Derrick Rose-led No. 1 seed. The Heat played some of their worst ball against the Bulls this season, and they can thank Rose and Tom Thibodeau, the NBA's coach of the year, for a lot of that.

But when we dig deeper into the regular-season series, we discover how how little we can glean from the Heat’s winless record.

Let’s start with this: There have been 144 minutes of Heat-Bulls action this season, and 61 of those minutes were without LeBron on the court.

The fact that nearly half the season series was played without the Heat’s best player -- not to mention the NBA’s best player -- on the floor makes it dicey to say that the regular-season record holds much water. LeBron watched the first head-to-head between these two teams from the sideline as he was recovering from an ankle injury. Chris Bosh's third-quarter ankle injury took him out of the game as well. That January game came down to the final minute, but it did not go in the Heat’s favor.

Of course, LeBron did play in two losses, too. But both of those games could have gone either way despite one of the worst shooting performances in NBA history (Bosh’s 1-for-18) in that February game in Chicago. Combine LeBron's absence in January and sharpened late-game execution as of late, and he is a big part of why the 0-3 record means very little. These aren’t excuses for the Heat; they are the merely facts.

So not only did LeBron miss the first game, but Heat coach Erik Spoelstra has revamped his favorite personnel since these two teams last met.

When you look at the Heat’s most-used lineups against the Bulls this season, something immediately jumps out at you:

None of them will play in this series.

Who was the center in the Heat’s most frequent five? Erick Dampier, a guy who hasn’t seen the court in more than a month. The Heat played 43 minutes (30 percent of the series) with Mario Chalmers and Dampier flanking the Big Three, and we have a better chance of seeing Brian Scalabrine run the point than that lineup again.

The next-most-used lineup against the Bulls featured Mike Miller, who has been all but squeezed out of the Heat’s rotation. If Miller plays in this series, it will be only in cameos because of his battered thumbs that render his hands barely functional.

The third-most-used lineup? Carlos Arroyo was in it.

Basically, the 0-3 could mean something if the lineups involved were going to see the light of day in the upcoming series. But they won’t. If you needed another reason to disregard the regular-season series: Joel Anthony, the team’s fourth Heatle in the playoffs and likely starting center, didn’t even play in the last matchup between these two teams.

Think about this: The lineup we might see the most, with Chalmers and Anthony next to the Big Three, barely played a minute in the regular season against Chicago.

The three regular-season matchups were essentially played to a draw, and the rotation has undergone a complete makeover since they last played in early March. We should see a lot more James Jones than Miller. We should see infinitely more Anthony and Zydrunas Ilgauskas than Dampier. We will most definitely not see Arroyo.

Come playoff time, we can basically throw out regular-season records anyway. (Right, Boston?) A review of the Heat’s lineups on the floor against Chicago makes the 0-3 record essentially useless for projecting how this one will go.