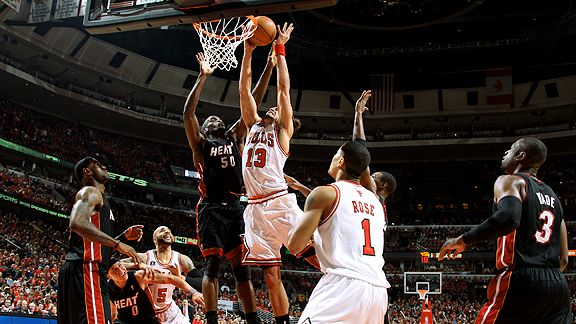 The undersized Heat were bludgeoned on the boards by Joakim Noah and the Bulls in Game 1.

This was a wake-up call for the Heat: they won’t win big by going small against this Chicago team.

The Bulls are not the Boston Celtics, a team that the Heat blew by in five games. Boston head coach Doc Rivers doesn’t believe in sending bodies to crash the offensive boards because he wants to get his players back on defense. That allowed the Heat to go small and speedy in that series without having to worry about giving up second-chance points.

In Game 1 on Sunday, going small didn’t work. Joakim Noah and the Bulls absolutely pummeled the Heat on the boards. Noah tallied eight of the team’s 19 offensive rebounds, which led to 31 second-chance points for the Bulls. The Heat gathered only 58.7 percent of the available defensive rebounds in this one, which is their lowest rate of the season according to Hoopdata.com.

“It simply overwhelmed us tonight,” Heat coach Erik Spoelstra said of the second-chance points. “It was something we simply couldn’t overcome.”

Can they overcome it going forward? I’m not so sure.

The Heat are in trouble because there are no easy fixes. They've been at their best this postseason when they employ the 6-foot-9 Joel Anthony at center, or when they slide Chris Bosh to the 5 and go without a traditional center. The Heat are essentially going small with Anthony on the floor. The small-ball formation allows the Heat to create mismatches and dismantle their opponents with athleticism and speed.

There's a tradeoff here. Going small has its virtues, but it has its drawbacks too. Namely, it compromises the Heat’s rebounding capabilities, but you couldn’t tell against the 76ers or Celtics. Why? They could hide Anthony’s abysmal rebounding -- he owned the third-worst defensive rebound rate among qualified centers this season -- because Philly also liked to go small and the Celtics didn’t like to clean their own glass. Anthony could swat at any shot he pleased in the paint because he knew the opposition wasn’t going to make him pay.

The Bulls, owners of the best rebound rate in the NBA, weren't as forgiving. Noah was behind eight of those offensive boards because he has the athleticism to jump quickly and the Heat can’t match his length underneath. Anthony would aggressively contest shots inside, but Noah beat him to the live ball consistently.

The Heat haven’t encountered a player like Noah in the playoffs. Jermaine O’Neal, Kevin Garnett and Elton Brand can’t pogo-stick up and down under the rim because they’re nearly a decade past their primes. Noah can, and it’s exposing Anthony’s shot-blocking tendencies that often leave him out of position.

But Anthony isn’t the only worry for the Heat. Monday's film session will be painful for many players. Perimeter shooters should never be able to recover their own rebounds, but the Heat committed the cardinal sin on several occasions. There were multiple times that LeBron James contested Luol Deng’s shot but failed to box him out and got burned. That laziness led to both put-backs and kickouts for 3s. C.J. Watson was also able to pick up the loose ball out on the perimeter untouched on not one, but two occasions.

If the Heat want to be competitive in this series, they need to go back to Basketball 101: Find a body and box out. Especially on the shooters. The Bulls’ efforts on the glass would make Moses Malone proud; at least ten of the Bulls’ offensive boards were recovered by the shooter. Rather than watching the ball approach the rim, the Heat need to seal a Bull and keep him out of the paint.

Another thing: This wasn’t caused by Derrick Rose's penetration, despite the common perception. Only one of the Bulls’ offensive rebounds was preceded by a Rose paint attack. After the game, Spoelstra mentioned overhelping on Rose as a possible explanation for the barrage of Bulls boards, but he'll realize that theory is off-base once he watches the film. More often than not, Rose had nothing to do with it.

The Heat were simply outworked in this game. Boozer was tossing Anthony around underneath and Noah was beating everyone to the ball. Collectively matching the Bulls’ intensity and execution will be imperative in Game 2, because they certainly won’t match them in length.

For the first time in the playoffs, size is an issue. The Celtics had big men but they couldn’t stay with James when he went to the 4 against the second unit. And the Heat preyed on this mismatch, outscoring opponents by 20.3 points per 100 possessions in the playoffs with James playing power forward. Chicago reserve Taj Gibson is the counter. He has the size and quickness to stay with James, potentially neutering the Heat’s small-ball attack.

The only way the Heat can respond is if they start bodying up players underneath rather than trying to outjump them to the ball. The Bulls’ bigs are too athletic for that.

No, the Bulls won't score 1.6 points per offensive rebound like they did in Game 1, but shortening the Bulls' possessions needs to be a top priority in Game 2 regardless. If the Heat want Anthony's ability to cut off Rose's penetration, they also need to make sure he's protected underneath. It is the job of Dwyane Wade, James and Bosh to collectively cover for Anthony and help keep the Bulls bigs grounded.

For the Heat, it's simple: Box out, or get bounced.