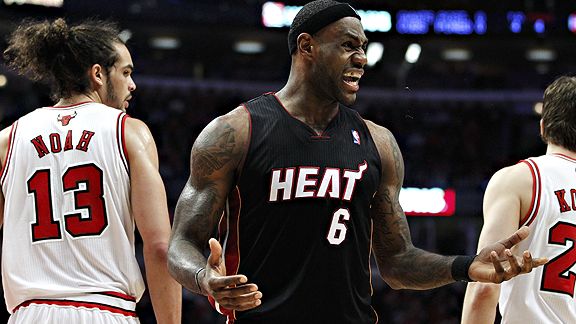 After Joakim Noah destroyed the Heat on the boards in Game 1, LeBron James and the rest of Miami's big three have to step up.

The Miami Heat aren't going to surrender 31 second-chance points in every game this series, but their season-long trend against the Chicago Bulls is cause for alarm. In the regular season, Joakim Noah and the Bulls destroyed the Heat on the boards, and continued to do so on Sunday.

As ESPN.com's Kevin Arnovitz pointed out in his rap sheet, there's no shortage of guilty parties. Chris Bosh didn't pick up Noah on rotations. LeBron James gambled and failed to box out. Jamaal Magloire looked lost in his first postseason game since 2007.

They don't have many options to turn to, but here are three possible answers.

The Heat certainly looked small in Game 1, but this would be an overreaction. Anthony handicaps the Heat's rebounding abilities since he's only 6-foot-9 and rarely in position for the rebound. He's a shot-blocker and a superb pick-and-roll defender, which is absolutely critical against a driving force such as Derrick Rose.

Heat coach Erik Spoelstra didn't even play Anthony in the last regular-season meeting between these two teams and kept him on the bench in favor of Dampier and Ilgauskas, who tower over Anthony. And looking at the numbers, you could see why Spoelstra preferred the 7-footers. When Anthony entered the game against Chicago off the bench in the regular season, the Bulls' offensive rebound rate jumped from 27.1 percent to 33.3 percent. And in Game 1 of the Eastern Conference finals, that troubling trend continued. The Bulls grabbed 44.4 percent of their own misses with Anthony out there, and just 33.3 percent with him on the bench.

But to lay this all on Anthony would be misguided. The Heat are asking him to play all over the court and he was the reason why Derrick Rose couldn't turn the corner and penetrate into the teeth of the Heat defense. If Ilgauskas or Dampier were out there, Rose would have a field day. Sure, they're tall, but they're not mobile or remotely intimidating in the paint.

In a perfect world, Haslem would come to the Heat's rescue riding a white horse. Before going down with a foot injury, Haslem averaged 11.1 rebounds per 36 minutes and could guard opposing 7-footers without issue. He has returned from his long rehab and is now active on the Heat's roster.

But the pre-injury Haslem isn't the same one that's sitting on the Heat bench right now. This version is a few steps slower and a lot more tentative. In seven postseason minutes, Haslem has yet to pull down a rebound. While that is the smallest of small sample sizes, it is indicative of his condition right now. His lift isn't nearly where it was before the injury and he has to compensate with footwork and quickness -- two areas of his game that are covered with rust.

It was telling that Spoelstra didn't call on Haslem until the Bulls extended their largest lead to 17 points with 4:11 left in the fourth quarter. And the few minutes that Haslem played wasn't exactly inspiring. On several of the Bulls' missed shots, Haslem was under the basket for the rebound and didn't even get off the ground. There's hesitation there.

Spoelstra could give Haslem a longer look in Game 2, but such a move would be a sign of desperation, rather than a solution.

3. Put spotlight on the big three

In Dwyane Wade and LeBron James, the Heat employ two of the top wing rebounders in the game. We typically consider their rebounding skills to be the icing on the cake, but for the rest of the series, they have to be the cake. Although the two stars weren't leaking out into potential transition opportunities, they certainly weren't as aggressive and attentive as they needed to be on the boards.

Wade tallied just three rebounds in Game 1, his lowest rebounding total since Game 1 of the Boston series, but that sum could have just as easily been zero. He didn't even pick up his first rebound until three minutes into the third quarter. And even that rebound fell into his lap. His third rebound came with 2:15 left in the game. Sure, he got the rebound, but in the process, he stepped out of bounds after lazily tracking down a ball that was heading into the stands.

Wade spent most of his energy guarding Rose and looked completely exhausted by the end of the fourth quarter. James was more aggressive contesting shots, which left Luol Deng to recover his own misses on multiple occasions. James was outrebounded by four Bulls players, including Taj Gibson who played only 23 minutes.

And that leaves us with Bosh. He starred in the scoring column with a game-high 30 points, but Kevin Arnovitz's postgame film session exposed Bosh's poor rebounding in Game 1. Of the 19 offensive rebounds, Arnovitz singled out Bosh as the culprit for five of them, the most on the team. Nine rebounds from Bosh seems like a sufficient total, but after examining the tape, he should have had many more.

Their big three averaged 26 rebounds per game in the playoffs before Sunday, but the trio collected just 18 in Game 1. The Heat have depended on the Heat for their scoring but their rebounding is just as vital to their success. Above all else, the Heat need their big three to play big on the boards if they want to get back on track.

As has been the case all season, the Heat will only go as far as their big three take them.