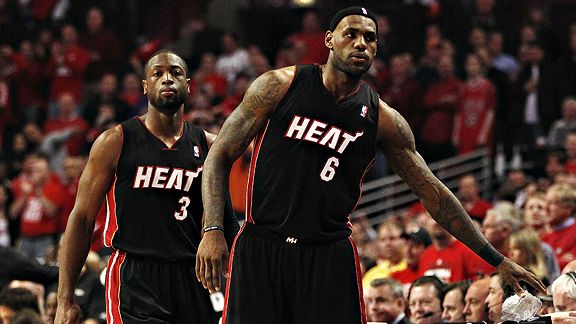 Will the Heat's superstars work within the set offense or go it alone in Game 2?

CHICAGO -- Here’s one of the less understood aspects of playoff basketball: The margin between a star scorer being rebellious and transcendent can be rather narrow.

LeBron James and Dwyane Wade walk this fine line all the time, as many stars do. The detail that goes into scouting and preparation at this level makes this a necessity and dangerous game. How James and Wade achieve that equilibrium in this Eastern Conference finals with the Chicago Bulls may be a huge variable in who ends up in the NBA Finals.

Simply, Wade and James have been serial violators of the Miami Heat’s offensive scheme in the playoffs. They break off plays routinely. It has looked genius quite often and also foolish at times. The Bulls’ style of defense, however, makes maintaining that balance tougher than ever.

Ask advance scouts who track the Heat and they’ll tell you that James and Wade freelance offensively as much as any two players in the league. Considering they were two of the top four scorers during the regular season, there’s plenty of reason to allow them such latitude. James and Wade are often at their finest when they are unpredictable and on the attack, which defenses can’t ever totally prepare for.

Philadelphia 76ers coach Doug Collins summed this up succinctly during the first-round series with the Heat, as he described how challenging it is to defend the talented duo.

“In a playoff series when everyone knows everyone else’s plays, it isn’t about running a play,” Collins said. “It is about putting a player in position to make a play.”

In the series with the Celtics, James and Wade were consistently able to create baskets whether they were running through the offense or not. This has been a regular trend in the postseason, as James and Wade’s scoring has been about the same as it was in the regular season, but the team has averaged five fewer assists per game.

In Game 1 against the Bulls, though, improvisation didn’t work as well. And in this series it may never work as well.

This was a clear issue in the second half, when Wade and James repeatedly ditched plays only to find themselves lost in possessions as the Bulls effectively squeezed them. Without ball and body movement that comes with organization, a sound defensive team like the Bulls will devour any star.

This is what happened as the Heat managed just 34 points after halftime and only 11 assists for the full game.

If Heat coach Erik Spolestra had the cachet of, say, a Phil Jackson, he probably would have come out and said that James and Wade need to actually run more of the plays. Maybe not all, but certainly more than they were. That means getting two or three passes and multiple pick-and-rolls to make the Bulls work harder and move more, the classic ways to break down a defense.

But Spoelstra, like the vast majority of coaches, must walk a fine line, in part because he knows he doesn’t want to stifle his stars who often will thrive on random and isolation offense. And in part, because he knows it’s such a delicate issue.

So Spoelstra says it in other ways.

“This is a very good defensive team, as we know,” Spoelstra said. “They protect the rim as well as anybody. That first strike, unless you're in a semi-transition opportunity, a lot of times that won't be there. And you have to have trust and you have to have the poise and patience to execute your offense.”

In the conference semifinals, when the Heat struggled by falling into the trap of not running their offense, Spoelstra said, “We have to run through all of our offense, what we do off the ball can’t just be fluff.”

That can be translated in different ways, of course. But believe that it is being pointed out to both stars. After two days to break down film and consider what they have to do to crack the Bulls’ strong defensive system, they certainly have heard the message.