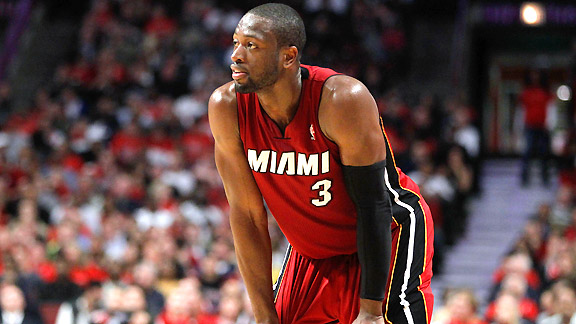 Dwyane Wade's defense got lost among the more compelling stories that came out of Game 2.

Lost amid the inspiring return of Udonis Haslem and the late-game heroics of LeBron James was the best performance nobody is talking about this morning -- Wade's defense in Game 2.

Wade was simply brilliant on the Bulls' side of the floor Wednesday night. His 40 minutes in Game 2 were a composite of his best defensive attributes, both his instincts and his fundamentals. Over the course of the evening, he covered all three of the Bulls' shooting guards then, when the game was on the line in the fourth quarter, he took on the assignment of handling Derrick Rose.

Like many teams this season, the Heat penalized the Bulls for Bogans' presence and Wade was the main disciplinarian. We saw this dynamic at work 15 seconds into the game, when Wade blocked Carlos Boozer at the rim. How was Wade in position to make the play? When Boozer caught a pass from Rose at the foul line on a slip screen, Wade was already set up in the paint -- not coming over, not collapsing -- but waiting with a magazine and a cup of coffee. Where's Bogans? In the right corner completely unattended.

If the pass had gone out to Bogans and he drained an open 3-pointer, we'd probably skewer Wade for cheating off his man. Bogans has drained a very respectable 21-for-46 from 3-point range in the postseason, but Wade has the quicks and instincts to be a defensive playmaker. Between the Bulls' reluctance to entrust Bogans and his more pedestrian career 35.5 percent mark from beyond the arc, Wade had every incentive to be aggressive as a rover. And in the 16 minutes Bogans was on the floor, the Heat outscored the Bulls 32-23.

When you watch the Bulls' offense grind during these possessions, there's a single constant -- Wade was everywhere. When the Heat loaded up in the lane on a Rose-Boozer pick-and-roll, forcing a reverse pass to Luol Deng in the left corner, there was Wade flying in to close out on the 3-point attempt. When Rose tried to go left off a high pick and got a step on Mike Bibby, there was Wade coming to the rescue, putting his body in front of a driving Rose at the foul line, forcing a kickout. And when the Heat trapped Rose on a high screen-and-roll with Joakim Noah, who was there to rotate promptly onto the 7-foot-1 Bulls center even though he was giving up eight inches?

Dwyane Wade. And not once, but routinely.

At one point in the third quarter, Wade picked up Noah after the center caught a pass off a screen from Rose. Noah was about 12 feet away from the rim just off the left block, and there was Wade harassing him. If you're looking for a defensive crescendo for the Heat in the second half, the moment when they begin to tighten the screws on the Bulls, this was it. With nowhere to go and Wade smothering him, Noah looked for anywhere he could pass the ball. Wade had Noah under such duress that Bosh darted over to pin the Bulls big man against the baseline. Noah eventually delivered a dangerous, leaping pass way back up top, but it was another empty possession for Chicago.

Aside from the small-on-big block of Boozer, none of these snippets is highlight reel material. They were subtle wrinkles in the larger fabric of the game. You don't hand a game ball to a guard for anticipating Deng's drive to the middle, beating the lanky forward to the spot, then forcing him to backtrack, as Wade did in the third quarter. But if we want to fully understand why Chicago struggled so mightily to get anything accomplished in the half court, we should start by looking at the work Wade did as a help defender.

For all the quality team defense Wade played in Game 2, his finest moments came during the Bulls' anemic fourth quarter. Chicago scored only 10 points in the period, and Wade spent the bulk of that time as Rose's primary defender. Rose failed to convert a field goal in the fourth quarter. In the 11 possessions Wade guarded Rose, the Bulls' point guard saw paint exactly three times. He earned a couple of trips to the line, once when he beat Wade with a left-handed drive (but missed the pair of free throws), the next when he rejected an Omer Asik screen and slithered away from Wade and drew another foul.

During the six-minute stretch he was guarded by Wade, Rose never attempted a field goal. James relieved Wade midway through the fourth quarter, as Wade slid over to guard Deng -- who had no better success against Wade than Rose had. Yet Wade wasn't done tormenting Rose. With the Bulls on their last legs, down seven with 1:20 remaining in the game, Rose drew Wade on the switch. Rose tried to push ahead with the ball, but couldn't make a dent past 21 feet, so he reversed course and pitched the ball over to Deng, who sent it right back. Wade was locked in, yielding maybe 18 inches to the MVP. Rose took a single dribble to his left, then launched from beyond the arc.

The shot never reached the rim. Wade got his fingertips on the ball.