Heat introduce Norris Cole, start workout
11yTom Haberstroh
Charlotte Hornets, Los Angeles Lakers latest to reveal Statement Edition uniforms for 2022-23 season
2dESPN.com
Hardaway, Manu among those enshrined in HOF
14d
Which NBA legends are headed to the Hall of Fame in 2023 and beyond?
14dKevin Pelton
The 'what-if' games from recent sports history
15dESPN
Heat's Haslem returning for 20th NBA season
34dNick Friedell
NBA to tip off season with opening night rivalries
38dTim Bontemps
Rivalries, returns and rookies: The NBA games you can't miss for 2022-23
38d
NBA 'all-in' tiers: Who is focused on the present, the future or is stuck in between?
38dTim Bontemps and Kevin Pelton
Jun 27, 2011 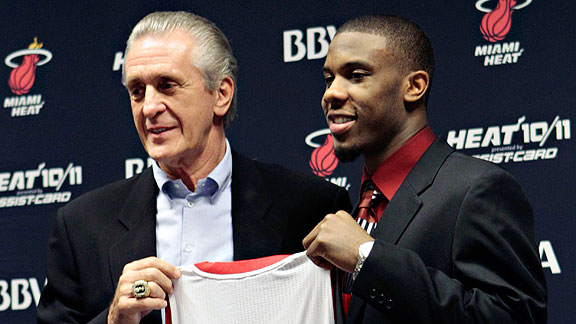 After making his first public appearance as a member of the Heat, Miami's first-round pick Norris Cole now goes to work at camp.

The Heat introduced first-round pick Norris Cole to the media on Monday. Now, the Heat can watch him play against other NBA hopefuls.

Pat Riley announced on Saturday that the Heat will be hosting a three-day camp this week working out a fleet of free agents. By rule, teams are prohibited from working out free agents who played in the league last season. Naturally, the names of those attending the camp aren't household names, unless you happen to live under the roof of a Heat writer.

So who's attending the camp? Ira Winderman of South Florida Sun Sentinel has the roll call for this week's workout. Eddy Curry, recipient of a $60 million contract from the Chicago Bulls, "headlines" the list along with Heat's first-round pick Cole.

If all goes to plan, the Heat should have two or three roster spots for free agents this offseason. Will one of them be plucked from this week's camp?

Here's the list of free agents coming to Biscayne Bay, along with some info about each player (I had to do some serious digging for a couple of these):