The King's speech and more from 'Classic'
11yTom Haberstroh
NBA stats-based win projections: Why one model has the Warriors fighting for a playoff spot
Atlanta Hawks
2dKevin Pelton
Hardaway, Manu among those enshrined in HOF
20d
Which NBA legends are headed to the Hall of Fame in 2023 and beyond?
21dKevin Pelton
The 'what-if' games from recent sports history
22dESPN
Heat's Haslem returning for 20th NBA season
41dNick Friedell
NBA to tip off season with opening night rivalries
45dTim Bontemps
Rivalries, returns and rookies: The NBA games you can't miss for 2022-23
45d
NBA 'all-in' tiers: Who is focused on the present, the future or is stuck in between?
45dTim Bontemps and Kevin Pelton
Oct 9, 2011 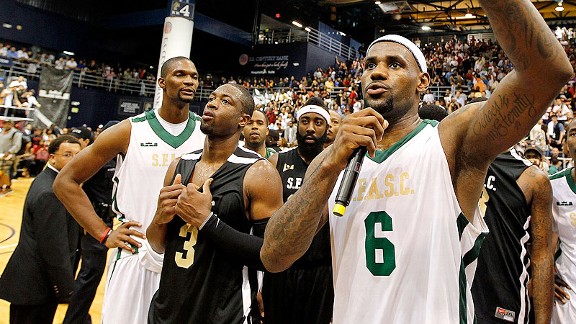 LeBron James gave a hearty thank you to the fans after Saturday's South Florida All-Star Classic.

MIAMI -- There was LeBron James.

The world's biggest basketball star stood inside a tight circle of the NBA's elite that had congregated at center court. LeBron grabbed a microphone and addressed an audience of 4,000 fans at Florida International University's U.S. Century Bank Arena who had just witnessed an enthralling, star-studded overtime exhibition game. Saturday marked the 100th day of a painful lockout, but the fans were there, 4,000 strong, on their feet, and listening intently to LeBron's words.

"Thank you. Thank you so much. We appreciate every last one of you," LeBron said.

In the distance, a fan wearing a Heat jersey held a poster over his head as LeBron uttered his final words to the crowd. The message on the poster read: "MR. STERN, CAN WE AGREE?"

The game, hosted by the Heat's Big Three, was spectacular. If there was ever a championship of pick-up exhibitions, this was it. Still, an inescapable feeling of dread lingered beneath all the rousing cheers and standing ovations. After all, this was probably the last game of NBA-caliber basketball these fans would see live for a very long time; negotiations between the league and the union had reached an impasse that would almost certainly kill the start of the 2011-12 NBA season.

So as the thousands of fans in attendance and hundreds of thousands of online viewers watched Team Wade nip Team LeBron 141-140 in overtime, there was a certain duel of emotions. In one moment -- like when Anthony drained a game-tying 3-pointer at the end of regulation -- you couldn't help but think: "Wow, what a game!" But that feeling of exuberance was soon squashed by another thought: "Man, am I going to miss this, or what?"

Yes, the South Florida All-Star Classic was wildly entertaining. As expected, there was a fair share of jaw-dropping dunks, high-flying acrobatics and mind-bending showcases of talent. But every lockout pick-up game features those things. This one felt like something bigger was at stake. Perhaps it's because the players were fighting to keep the exasperated fans on their side.

It was quite the moment, but there were so many more. Here's some other scenes and notes from Saturday's extravaganza.