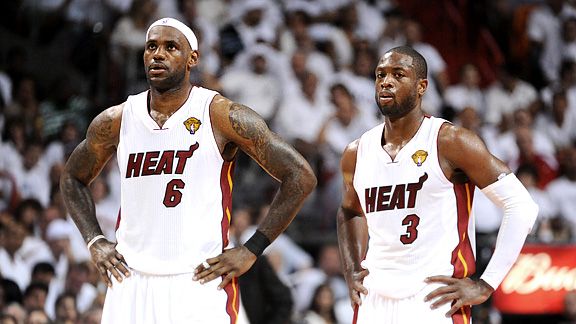 LeBron James and Dwyane Wade dabbled again in hero-ball in Game 2, and it finally burned them.

That’s the thing about luck. At some point it runs out.

The Heat couldn’t keep winning games by depending on LeBron James and Dwyane Wade to play out of their minds from downtown. The warning signs were right there for everyone to see. The Heat’s hero-ball antics finally caught up to them, and some of their ill-advised 3-point shots propelled the Heat into a spiral that led to one of the biggest collapses in playoff history.

What is hero-ball? Cue up the final two minutes of the Heat’s loss and you’ll catch a glimpse here and there.

With a 2-point lead, James crossed half court with the ball, dribbled around the perimeter, lost the ball, recovered it then fired up a contested, off-balance 25-footer as the shot clock expired. Clank.

No passes. No off-the-ball movement. Everyone became ball-watchers. If they wanted James to play hero, he obliged.

But the Heat recovered the offensive rebound and started it up again.

This time, the Heat ran some pick-and-rolls and actions off the ball but ended up with the same result: James with the ball at the top of the key with five seconds left on the shot clock. We should credit the Mavericks defense here, because when Dirk Nowitzki blitzed a pick-and-roll, James put his head down, knowing he was going to get another chance at another hero heave, and predictably chucked up a contested 3-point attempt. Another miss.

The Mavericks went the other way and tied up the game with less than a minute left.

Next Heat possession, Wade tried his hand at hero-ball again, the first one was the shot to put the Heat up by 15 earlier in the quarter. After receiving a handoff from James out by the scorer’s table, Wade curled around, flying toward the top of the key. Wade had Shawn Marion beat off the dribble but, instead of penetrating into the paint, Wade inexplicably pulled up from long range and rifled off a step-back 3-pointer. The shot clock wasn’t expiring (there were eight seconds left -- a lifetime when Wade has the ball), but Wade apparently felt the need to swing for the fences. Another miss.

Three straight possessions that lead to Wade or James trying to bail out the offense with a 3-pointer. In fact, of the Heat’s 14 field goal attempts in the fourth quarter, 11 of them came from beyond the arc, including the final four of the game.

“When it started to slide, it just kept on going,” coach Erik Spoelstra said after the game.

As far as I can tell, hero-ball is a term coined by Celtics coach Doc Rivers a few years back. It’s taking the easy route instead of the smarter one. It’s swinging for home runs instead of working for base hits. It’s opting for the fadeaway jumper that would star in the highlight reel, the same one we all practiced as kids out in the driveway.

James and Wade played hero in recent games, and many were quick to shower them with praise about their clutch abilities. And some of that was justified. But beneath the remarkable shot-making in the Boston and Chicago series, an ancillary cost arose: that Wade and James may become drunk with their unlikely success from downtown.

We all know James and Wade are not 3-point shooters -- James bluntly acknowledged as much at Wednesday’s practice. But when they combine to shoot 14 from 3-point range in a single game -- while only making four of them -- it seems they have lost sight of who they are: world-class basket attackers.

This is not to place the blame solely on James and Wade’s shoulders. They had their hands tied on a couple 3-pointers, but I don’t find it a coincidence that they launched more 3-pointers in a game than they have all season following a string of miraculous shots made in recent games.

After the game, Spoelstra said the team needed to execute better down the stretch. He's right about that, but the Heat would also benefit from James and Wade being more assertive and penetrating in crunch time, rather than settling outside the 3-point arc.

Sure, it’s easier said than done against the Mavericks defense, but more than anything the 3-point shooting is a love affair that should come to an end.