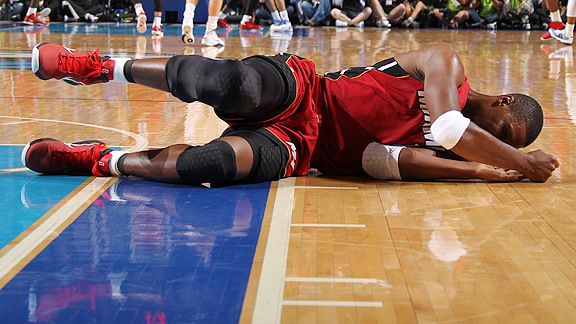 Chris Bosh got up off the mat after getting poked in the eye to hit the game-winner in Game 3.

DALLAS -- On the road, with a battered eye, amid one of the coldest shooting stretches he’s ever endured, Chris Bosh hit the game-winner on the biggest stage of his career.

Bosh was alone. With the game tied and 40 seconds remaining in Game 3, Tyson Chandler left the Miami Heat power forward on the left baseline in order to stop LeBron James’ penetration into the lane. As Chandler met James at the foul line, James immediately turned to his right and flipped a backhanded pass to Bosh, who had missed 11 of his previous 17 shots on the night.

Without hesitation, Bosh rose up and knocked down the jumper, instantly bringing the 20,000 Dallas Mavericks fans to a hush in AmericanAirlines Center.

Following the game, Bosh was alone on another stage, sitting down at the postgame podium and peering into the sea of media. With a tissue in hand, Bosh dabbed at the moisture from his swollen eye.

Considering how violently Bosh writhed on the floor in the first quarter, a return in Game 3 seemed unlikely -- never mind draining the eventual game-winning shot. He had just gotten poked in the eye by Jason Kidd, who swiped his hand at Bosh when he made a move past Chandler. Bosh fell to the ground grabbing his face, and the Mavericks went the other way and hit a 3-pointer against the shorthanded Heat.

How did his eye feel at the time?

“Open your eye like this,” Bosh said after the game, spreading his eye lid open with his left hand. “I’ll poke you in it.”

After a few minutes of attention by Heat trainers, Bosh leapt off the hardwood and trotted over to the Heat bench, still clutching his eye.

The injury clearly bothered Bosh, who has been mired in one of the worst shooting slumps of his career. After the swipe, Bosh missed five of his next seven shots while coughing up the ball twice -- all before halftime. He missed point-blank layups and flubbed dunks in traffic. Bosh, who had averaged 8.9 rebounds in the playoffs entering Sunday’s game, finished the first half with just one rebound.

But we saw a different, sharper Bosh in the second half. In the opening possession of the third quarter, Bosh effortlessly sank a 21-foot jumper. The Heat maintained him as the focal point of the offense, repeatedly running pick-and-rolls with him as the screener. Wade and James never stopped hitting him on rolls and that confidence never waned. Bosh made five of his nine second-half shots, with two of his misses coming on desperate off-balance heaves with an expiring shot clock.

But that final shot from Bosh is what everyone will remember. It was made possible first by Wade when he pulled two defenders toward him out on the perimeter, which started a chain reaction from the Mavericks' defensive rotations. That prompted James to deliver the pass to Bosh in the corner once Dallas' defense spread thin.

But the play doesn’t happen without Udonis Haslem’s tremendous screen on Dirk Nowitzki. Since Chandler rotated onto James, Haslem knew Nowitzki would have to help out on Bosh.

“I told UD who to hit,” Bosh said, describing the play. “He did a fantastic job of screening me. I knew I was going to have an open shot. I just wanted to have good form, follow through. And I’m lucky.”

The effect of Bosh’s eye injury was most evident not in things that he did, but the things he didn’t do. For instance, Bosh completely lost Chandler under the rim on a thunderous dunking putback by the Mavs center in the fourth quarter. As Chandler rose up for the dunk, Bosh could be seen under the basket boxing out nothing but his own shadow.

Bosh said after the game that his vision isn’t limited by the swelling.

Still, Bosh maintains that there wasn’t any doubt that he would return.

“I think it’s just symbolic of our season, everything,” Bosh said. “You just have to keep overcoming. If you lose Game 2 at home, blow a 15-point lead and you’re out on the road and everything is against you, you have to get it done. I thought it was quite fitting that I got poked in the eye early.”

For Bosh, there were more ups than downs in this game. He’s now shooting just 31 percent from the floor in his first NBA Finals appearance and has missed more layups than he’s made. For the majority of the series, Chandler has tied Bosh in a straitjacket, but the Heat All-Star keeps battling back.

Considering the series-long shooting slump, combined with the eye injury, Bosh was perhaps the unlikeliest of players to hit the game-winner.

All season long, Heat coach Erik Spoelstra has emphasized the importance of trusting teammates. That decisive possession -- the scorching Wade feeding the lukewarm James, then feeding the frigid Bosh for the critical points of the game -- demonstrated that trust.

“It’s the trust we have in each other’s ability,” James said. “No matter what the point of the game is at.”

Bosh added, “We trust each other. Our guys have been doing a fantastic job of showing that trust, especially in crunch-time situations. This is as big as it gets.”