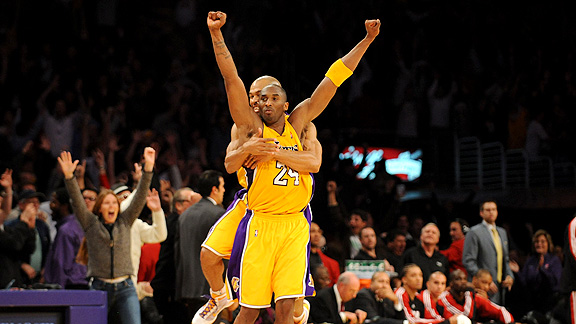 LOS ANGELES -- After Dwyane Wade had said hello to Kobe Bryant’s wife outside the Lakers locker room, then pinched Bryant’s daughter’s cheek, he turned to Bryant himself and simply stared, with a look of both anger and amazement.

Bryant held out his arms and shrugged. Yes, kind of like this.

“Hey man,” Bryant started, almost apologetically. “Hey. What’d you want me to do?”

He could have done what the laws of physics practically ordered him to do, to follow the principles of momentum and projectile motion and miss the shot. He could have allowed the Heat to leave Staples Center with a victory, a reward for their effort on the second night of a back-to-back set, let them be one of 11 teams in the NBA with a winning record on the road.

Except Kobe Bryant isn’t that gracious, is he? His blood temperature drops off the bottom of the thermometer in moments like that. He’s not known for missing those shots. He’s known for making them. That’s why he’s the best option for a last-second shot in the history of the NBA.

This one on Friday night exemplified it. Normally a Kobe Bryant buzzer beater would be ho-hum. Haven’t we seen that before? Don’t we expect it to happen? The talk of the NBA should’ve the Nets actually winning a game. Now that’s a rare event.

Except this shot -- this off-one-leg, swaying-to-the-left, three-point bank shot at the buzzer to beat Miami -- was so ridiculous that it had his NBA peers firing off astounded tweets (“@rudygay22 Are you kidding me Kobe!”) and even Bryant had a hard time believing it. He called it “the luckiest shot I’ve made by far.”

“I released the ball, I was kind of like, ‘No effing way. No way this ball’s going in,’” Bryant said. “It felt good, I just didn’t think I was going to make that shot. I’d like my chances if I had squared up and got the shot I’d wanted to.”

With the version he wound up taking the percentages were supposed to favor the Heat.

“If you told me before the game that the game would be decided by Kobe shooting a left, one-legged, backboard three, I’d have took that,” Wade said.

The scenario: Lakers down by two with 3.2 seconds left. Ron Artest inbounded from the right sideline. He ignored Derek Fisher, who was open at halfcourt. He patiently waited for Bryant to break loose from a double-team by Wade and Udonis Haslem and come toward the ball.

“They were trying to deny him, and I knew it was impossible,” Artest said. “This is the Black Mamba, you know what I mean?”

Artest gave it to him, then went to a spot vacated by Haslem, who was busy supporting Wade like a linebacker. Bryant dribbled to his left, and when he was directly lined up with the basket he launched a shot over Wade’s outstretched arms. He went for the backboard to give himself more margin for error. Bryant’s body was arched to the left like a first parenthesis. His momentum carried him over near Jack Nicholson after he released the ball. Everything about the shot screamed “wide left.”

“When it left his hand, it didn’t look like it was gonna be a shot that could go in,” said Fisher, who was just a few feet from Bryant when he took it. “But as it got closer to the basket, I was looking and was like, ‘Man it’s straight.’ I was excited. I had to really remind myself that this is a mid-season game in December. I was running around, I jumped on Kobe’s back like it was the Finals.”

No, this didn’t even clinch a division championship, as Bryant did when he hit this pair of incredible shots in Portland at the end of the 2003-04 season. It simply added to the lore, defied statistical studies that suggest LeBron James, Vince Carter or Ray Allen would be a better option there, made you wonder how he does it.

The answer, apparently, is BMX bikes. Bryant said the skill set he employed Friday night came from his childhood days when he and his friends would try to hit telephone poles with rocks as they rode by.

“You’ve kind of got to throw back a little bit, you know what I mean?” Bryant said. “That’s exactly what I had to do, because I was falling left. If I shot the ball straight, it would have been way off.”

The story sounded a little too cute to be true, but might as well roll with it.

Fisher likened Bryant’s bad-shot making to the ability of David Ortiz or Vladimir Guerrero to hit bad pitches. As Wade, (who, as Bryant noted, has “hit some pretty crazy shots himself”) said, “If you want anybody to hit a shot like that you’d rather it be Kobe than anybody else, because that’s what he’s done in the past. Somebody else would’ve hit that shot, this locker room wouldn’t look this way.”

The most telling statement was made just outside the Laker locker room, where Phil Jackson stood outside waiting for an electric cart to drive him down the tunnel and to his car. I told him Kobe’s shot showed why I’d take Bryant over anyone in the final seconds, even the guy who used to wear No. 23. That caused Jackson to raise his eyebrows. Now maybe with six seconds left, enough time to create a good look, I’d go with Jordan. But with only enough time to take a dribble or two, or to catch and fire, I’d go with the best bad shot-maker ever. Because even when it’s a bad shot, Kobe gives you a good shot at winning.

Jackson processed it all, then said two words that resonated as much as Bryant’s three-pointer: “I agree.”