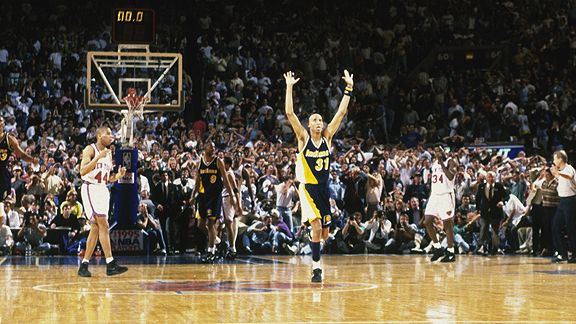 The best trash talker of all time tells his secrets.

The outcome was set in stone. As soon as they got Reggie Miller under the lights and let him do his thing, nothing else mattered.

That was sometimes the case for the Indiana Pacers. But it was entirely the case for Dan Klores and the makers of the documentary "Winning Time," which chronicles the verbal, emotional, physical and basketball battles between Reggie Miller's Pacers and the New York Knicks.

It'll be on ESPN in March (part of the 30 for 30 documentary series), and at the Sundance Film Festival in January.

Whenever you see it, you'll be swept off your feet. When Reggie Miller is explaining the power of trash talk, it's hypnotic.

I went in with two concerns. First of all, I had been working non-stop on Tim Donaghy stuff, and was consumed with spreadsheets, referee statistics, and cold hard analysis. Comedy was the last thing on my mind. What's more, having lived in New York through this entire episode, I expected what I remembered: Bitterness. New York in the 1990s did not have a sense of humor about basketball. Reggie Miller was reviled. The Knicks were -- despite their one foray to the Finals at the end of the decade -- seen as a great gritty tragedy, stretched out over a decade or more. (As Jeff Van Gundy says in the movie, Pat Riley wasn't Hollywood. The real Pat Riley, the one that coached the Knicks, is all Schenectady.)

But Klores plays this tale as high comedy, set to opera. And it's delightful, thanks in no small part to Miller himself, plopped on the couch in some high-end hotel suite somewhere, spinning yarns for Klores' camera. He's infuriating, hilarious, crafty and more than anything really fun to watch. Among the tales:

"Winning Time" is a tightly woven 68 minutes. There are clever transitions from video, to still photographs of the same exact moment and posture. The interviews are so strong, and so numerous, that there's isn't any voiceover -- none is required. Instead there is powerful music, and testimony of dozens of people who lived those moments, from Patrick Ewing and John Starks to Donnie Walsh and Mark Jackson. (One of the showier moments is when countless on-camera sources, all in a row, say the phrase "presence of mind," one after another like machine gun fire, in telling the story of Miller's stepping back behind the 3-point line after getting the steal that made him famous in New York. You know how many interviews you have to do about one subject to get that many people to use the same exact phrase?)

The storytelling exposes the fun that is the fountation of Reggie Miller's most famous work. The final proof for me came when Klores showed us video of Michael Jordan and Reggie Miller trying to gouge each others' eyes out. On YouTube it's crass and regrettable. In "Winning Time" it's super slow motion, set to opera, with Spike Lee telling us that when he saw Miller get under Jordan's skin, he knew that Miller had to be the best trash-talker ever.

So true. Everybody in the room laughed.