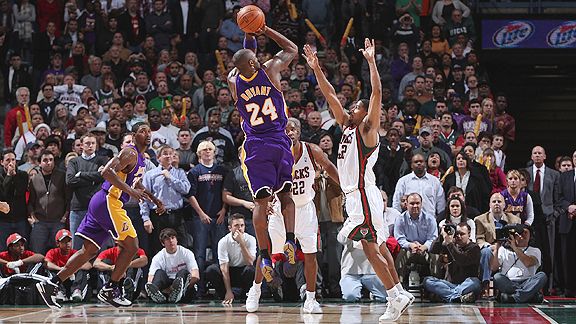 Most spectacular game-winners made? Check. Most likely to get you a bucket in crunch time? Not so fast ...

I don't know who the best crunch time player is in the NBA. Before handing out an award like that, I'd dig into all kinds of stuff, like:

All that research would no doubt give you a short list of candidates. Then I'd go to the video, and actually watch all those clutch plays. Take notes, the whole deal. Was a certain play really amazing? Or, alternately, did the player in question miss a wide open teammate? I'd weigh all that kind of stuff.

Then, I suspect we'd have a pretty good idea which player or players deserved to be called the best clutch performers in the NBA.

The test would be: If your team was down one with ten seconds left, and you could give the ball to anyone to make you a basket, with your life hanging in the balance, whom would you pick?

Forget the guy who has the best highlights, or makes the toughest shots. You'd pick the guy with the greatest likelihood of getting your team points, however he gets them.

This research has not been done.

Among Laker fans, there's a different measure. It's not that we ought to figure out who's the best in crunch time. It's that Kobe Bryant is the best, and evidence to that effect need not be provided.

That's fine. I'm a fan too. I respect that position, believe it or not. Keep believing. You get to use your criteria to determine your convictions.

But don't expect me to come along just 'cause. You may not need evidence. But I do.

Man, you wouldn't believe the anger in response to my post yesterday about Kobe Bryant in crunch time.

But look at this with me: A super-quick look at who hits big shots reveals that Bryant is consistently someone who takes more shots than anyone, but misses a lot.

I'm not saying he isn't the best crunch time performer. Don't know who is. Haven't done the research. Maybe it's him. But I am saying that that little quick bit research I have seen on the topic sure makes me say hmm ...

Remember, I'm choosing someone to save my life with one make. Those 22 extra misses hurt.

Kobe Bryant is in a lot of highlights making big shots because he takes a hell of a lot of them. If you want highlights, cool. That's how you get them.

But if you want the most effective player with the game on the line, you sure wouldn't want to edit out those misses like they do on those YouTube highlight reels. If I'm going to choose somebody to score, with my life on the line, I'm going to count the misses too.

UPDATE: Here's yet another investigation of crunch time scoring, from NBA.com's John Schuhmann, which tells a similar story -- Bryant's true shooting percentage (includes free throws and 3-pointers) ranks him 38th in the NBA in final five minutes of close games. And, interestingly, he's not one of those players who scores better in crunch time than he does the rest of the game. There are players like that, but he's not one of them. A deeper examination, including one possession games in the final minute. Again, Bryant is not among the leaders.