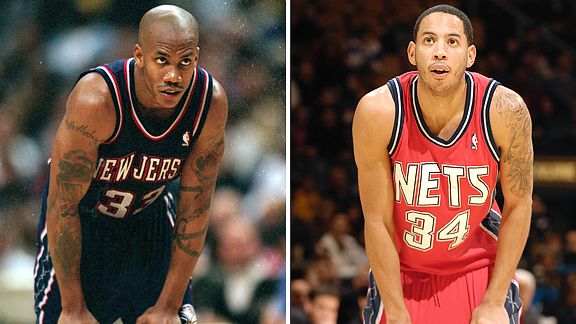 Photos by Elsa and Ron Turenne via NBAE/Getty Images.

A decade ago, the Nets were sad, divided and disappointed.

They had an alpha-dog point guard who had arrived from a better team, ready to show what he could really do. They had a coach who was really smart and friendly but maybe a tad too soft-spoken and thoughtful to take command of the situation. They had a big man, drafted high, who went long periods without touching the ball.

Which is all true today.

Back then, the leading characters were Stephon Marbury, Don Casey and Keith Van Horn.

Now it's Devin Harris, Kiki Vandeweghe and your choice of Brook Lopez or Yi Jianlian.

I hear you Devin Harris fans. You're saying: How dare you compare this talented young player to the icon of self-centered gunners?

By now it's well accepted that Marbury was more or less a bust just about everywhere he went -- the kind of super-talent who could always get his but never cared much about the rest of his team, and as a result did a heck of a lot of losing.

Harris is a long way from that. But maybe not as far as you might think.

Did you notice that the Nets had their best game of the season on Wednesday, when Harris sat out with a sprained wrist?

That got me thinking more about the idea that Harris might have a little Marbury in him, exactly a decade later. Some things I have learned:

You could keep going on with the comparisons between the teams. Harris had played with an MVP big man in Dirk Nowitzki before coming to the Nets. Marbury had played with Kevin Garnett. Kerry Kittles -- an athletic "D and 3s" guy is not dissimilar from Courtney Lee.

And there's one last similarity. Today's Nets are essentially praying for a savior from out of town who will show up, change the culture, and lead them to the Finals immediately. LeBron James, perhaps. It might seem like a crazy gambit. But stranger things have happened. Jason Kidd arrived in the summer of 2001, and that very next year those same players who had been so miserable for so long were in the Finals.