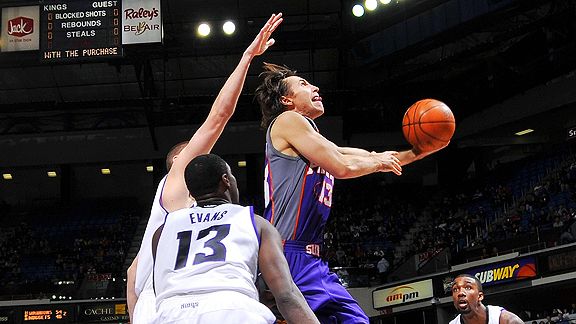 In Chris Ballard's book "The Art of a Beautiful Game," we learn about Steve Nash's awkward approach to layups.

It's near the end of Nash's senior season at St. Michael's, and [coach Ian] Hyde-Lay is wondering what the hell his point guard is doing. Approaching the basket, Nash has an open lane for an easy righthanded layin, but he instead veers across the basket to shoot a lefthanded floater, a significantly more difficult shot.

It is something the coach has noticed on numerous occasions: Nash doing everything possible to avoid jumping off his left foot for a simple righty layup, even though this is the dominant leg for a right-handed player. One time Nash cuts middle, the next he uses his left hand, or jumps off his right foot and uses his right hand, a move both difficult and unnatural. (Just try it sometime). "It was ironic because he was so good at everything else," says Hyde-Lay. "But he was never good at the traditional right-handed layup."

For Nash, the difficulty began when he was a 10th grader. He'd sprained his left ankle and, gym rat that he was, never let it properly heal. As a result, he found it increasingly difficult to leap off his left foot; whereas he'd been able to dunk off his left leg before, he no longer could. Thus every drive became an adventure. "It really made it much harder to finish with my right hand," he says. "I'd make most of them, of course, but I had to really concentrate." As a result, Nash became, as he puts is, "basically lefthanded around the basket."

Ballard goes on to report that Nash still has the same habits, and seldom completes the easiest shot in basketball for a rightie: The right-handed layup, jumping off the left foot.

From the moment I first read that passage months ago, I intended to use Synergy to watch Steve Nash shooting layups. Were regular ol' layups really such a rare part of his game?

Anyone who has ever watched Nash play can tell you that he has an effective way of moving unpredictably and awkwardly in the lane. In the paint he often slows to a stop, for instance. Nash explains to Ballard that this lets a fairly small and not that explosive guy decide "when the race starts and stops." He also describes how often he'll jump sideways, instead of up, to keep longer, faster defenders from timing up his shot and blocking it easily.

But surely one of his most powerful tools of awkwardness is "wrong-footing" his shots. Defenders have a lifetime of experience feeding their intuition about when and where to be to prevent a layup. None of those instincts really work with Nash.

I just watched every one of Nash's layups againts halfcourt defense in 2010. There are 39 of them to date.

Even though he's right-handed, and would be expected to jump off his left leg most of the time, Nash jumped off his right the most of all. 23 of the 39 times. (How weird is that? For comparison's sake, I watched Tyreke Evans -- another right-handed guard noted for scoring in the paint -- shoot the same number of layups in the halfcourt. Evans jumped off his right foot just nine times out of his last 39, and his left 22 times, which means Nash is even more right-footed than Evans is left-footed, if you see what I mean.)

Nash jumped off both feet three times, and off his left 13 times.

In one stretch, Nash jumped off his right leg eleven out of twelve times.

Out of those 39 layup attempts, just three were conventional left-foot, right-hand layups. And there were several times like in the anecdote above, where a regular layup appeared to be available, but instead he reversed the ball to the other side of the bucket, jumped off two feet instead of one or pulled up for a short floater.

Clearly, to Steve Nash, the easiest shot in the game to you and me is not at all the one he's looking for. And it has served him well: According to Synergy, this season Nash is getting his team an average of 1.4 points every time he shoots a layup in the halfcourt, which is an amazing rating -- the bigger, stronger Evans, for instance, is at 1.06 points per attempt around the hoop.