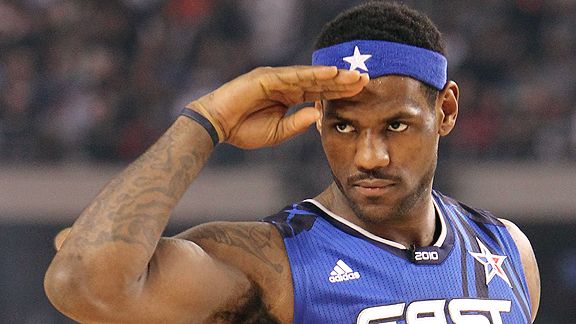 Talk to you next summer, captain.

After the madness of trade season, several teams have lined themselves up to be in position -- or very close -- to sign a maximum-salary player this summer. Calculating exactly how much money each team has to spend is a tricky exercise. There's a lot we don't know -- the salary cap figure, where each team is picking in the draft (which affects their budget), whose team options will be picked up, which guys will exercise their early termination options, and other smaller variables.

The figure listed beside each team represents their projected 2010-11 team payroll, which includes all options (team, player and early termination options) as well as conditional contracts. To estimate how much cash each team has available to spend under the cap, we're going to project a salary cap number of $53.6 million.

We should assume Dwyane Wade will opt out of the final year of his $17.15 million contract. That leaves Michael Beasley and Daequan Cook as the only players the Heat are locked into, and their combined contracts total $7.13 million for 2010-11. Miami also has a couple of mid-first-round draft picks (theirs and Toronto's), which would commit them to another $2.5 million. Miami owns a $4.6 million team option on James Jones and a very reasonable $847,000 team option on young point guard Mario Chalmers. (Hypothetically, let's say they decline the first option and pick up the second.) Even after you include roster charges for five players (let's assume the other two roster spots are filled by big names), the Heat have bundles of money to spend (almost $40 million!), enough for two maximum contracts -- so long as Wade is one of them, since he'll count against their cap number. After that, they could still throw max dollars at one of the other marquee names.

No team in the league has been more aggressive about ridding themselves of contracts that extend past June, a process that continued Thursday when the Knicks unloaded Jared Jeffries in a three-team deal with Houston and Sacramento. That leaves Danilo Gallinari, Wilson Chandler, Toney Douglas and Eddy Curry ($11.28 million player option) as the only figures on the books headed into the summer, totaling less than $18 million for those four players. Add eight minimum roster charges (the Knicks don't have a first-round pick) and you get a hair over $21.5 million, leaving New York with just enough money to extend two max contracts. They'd have to completely gut their roster to sign two max guys, and would have little to no chance to retain David Lee, whose rights they'd have to renounce.

The Nets have seven players under contract for 2010-11, plus a very affordable $854,000 option on Chris Douglas-Roberts. For argument's sake, let's assume the Nets score the top pick in the draft (which would put them on the hook for $4.29 million), and keep Dallas' pick (another $1 million). We won't assess New Jersey for minimum roster charges, since those spots will likely be used for bigger names. That leaves the Nets with just over $31 million in salary commitments and somewhere in the neighborhood of $25 million to go shopping -- enough for one max player and a couple of decent pieces to bolster their roster.

That $31.85 million number includes the Bulls' core of Derrick Rose, Luol Deng, Joakim Noah and Kirk Hinrich, along with their pair of rookie forwards, Taj Gibson and James Johnson. We'll put the Bulls on the hook for a mid-first round draft pick, approximately $1.5 million, but table the conditional pick they received from Charlotte in the Tyrus Thomas deal. With seven roster spots accounted for, the Bulls will have about $20 million, enough to dangle a max contract in front of one of the top-tier free agents.

It's a safe bet that they'll decline the team option on Josh Howard's $11.84 million. If we project that Quinton Ross exercises his $1.15 million player option and the Wizards hang onto their high draft pick (let's project it as the No. 4 overall pick) and Cleveland's late first-rounder, they'd be committed to roughly $33 million for eight bodies. Do they extend a $4.8 million qualifying offer to guard Randy Foye? If they do, that brings them up to approximately $38 million, maybe enough wiggle room to offer a max contract. Without Foye, they've got plenty to offer a max player.

The Kings were central to the whirlwind deal with Houston and New York. The smoke has cleared, and Sacramento looks like they'll be accountable for around $36 million in salaries for 10 players if we assume they'll pick up the $3 million team option on Carl Landry and score the No. 5 pick in the 2010 draft (we'll leave the Kings' $946,000 team option on Joey Dorsey out for the time being). That's a nice chunk of change -- say $16-17 million -- for Sacramento to fill out their promising young roster. They probably won't lure a max player, but they'll be in prime position to add a couple of nice supporting actors.

By shipping Al Thornton to Washington and Sebastian Telfair to Cleveland, the Clippers left themselves with only $35 million or so in commitments for five players and their first-round draft pick (we'll project the No. 10 overall pick). They'll need to fill at least six roster spots (so let's charge them another $2 million and change), but that would leave the Clips with enough shekels to offer a max deal, provided they renounce the likes of Travis Outlaw. If they fail to land one of the big names, they'll be able to round out their roster with some mid-level talent, or perhaps absorb an existing contract with a sign-and-trade.

Minnesota barely squeezes onto our list and they don't land here without a bunch of disclaimers. That number above represents the eight players Minnesota has under contract for the 2010-11 season, but doesn't include their boatload of first-round picks -- and Ricky Rubio, who will go back onto the Timberwolves' cap number next season. Those draft picks, each protected at a different level, amount to more than $7 million in salary commitments. Minnesota would have to perform some serious budgetary gymnastics to be eligible to extend a max contract to a free agent. They could opt to sell or move their picks, or ship some talent to a team with a trade exception. It'll be tough. Still, with all their young assets, draft picks and cap space, the Timberwolves figure to be legitimate players in the marketplace this summer, even if they can't nab a max player.

To review: Miami and maybe New York will be angling to sign two max players each. Another five teams will do everything in their power to pursue the free-agency elite. And, of course, all the big names (LeBron James, Chris Bosh, Joe Johnson, Dirk Nowitzki) can re-up with their current teams. Kobe Bryant also has a player option that he's expected to pick up -- so long as the Lakers grant him an extension -- but anything is possible. If any of these premier players walk, their teams wouldn't be eligible to sign a new player to a maximum deal, because they'd be over the cap.

Will there be nine max contract players around this summer? Good question. As we mentioned, any and all of them could sign extensions, or decide not to exercise options to end their contracts. Will there be enough max players to go around? Judge for yourself. Here are some of the big-time names (plucked from ESPN's master list of potential free-agents):