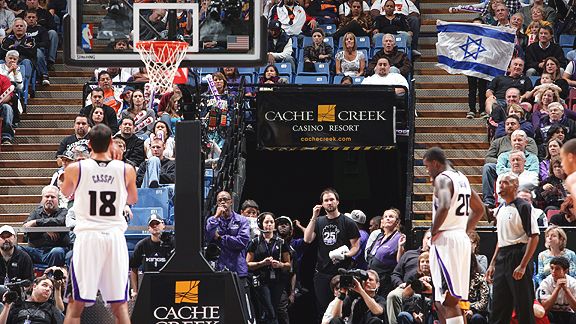 Ever since Omri Casspi hit the scene, I've had two general conversations with people I know:

This second question is a good one. Casspi, of course, is the first Israeli to play in the NBA, which explains a lot of the exuberance. Israel has long been a basketball-crazy land, and sending a native son over to the NBA is the ultimate realization of that passion. Noam Schiller of Jerusalem Sports wrote a celebratory piece over at Cowbell Kingdom describing the devotion to Casspi in Israel:

[R]egardless of how Casspi’s career unravels from this point forward, he will always be the first one who made it. And all words and all the articles and all the TV pieces that have aired in the American media since that night late in June – and some of them are really really good – can’t even begin to describe the impact this has had in Israel. Kings games have become a matter of national importance – except nobody cares if they win or lose. David Thorpe’s rookie rankings are monitored on a weekly basis by every major sports website in the country ... New Casspi interviews and analysis pieces are published by the hour, and nobody is sick of it, because all they want is more and more information of how their promised son is doing in the scary outside world.

So the next time you watch a Kings game, and the camera glosses over an Israeli flag in the crowd, don’t think to yourself “boy, these people are really over doing it”. Because the truth of the matter is, you ain’t seen nothin’. That camera isn’t showing you the people back in Israel who wake up in the middle of the night to watch the Kings play the likes of the Pistons and the Knicks and the Bucks, despite having school or work the next day. It doesn’t show the “Omri Casspi scored 15 points!…and the Kings lost” headlines. It doesn’t show how all of a sudden, the Rookie-Sophomore game and the All-Star HORSE contest have, at least for one year, at least for one nation, stepped out of obscurity and into the spotlight. It doesn’t show how all these corny new headlines – such as the suddenly over used “Omri, King Of Israel” – are indeed corny, and sappy, and stupid, and true.

Most American Jews have a visceral connection to Israel. They consider the prosperity of Israel their prosperity too. They also feel the nation's hardship, even if that burden isn't present in their daily lives.

But there's something else about Casspi that speaks to the American Jewish psyche. Some of it is familiar -- old jokes like, "there's a book about Jewish athletes...it's a pamphlet!" But beneath the surface lurks something very real and raw that taps into why American Jews are so crazy about Casspi.

To understand the modern origins of this dynamic, we have to look to the late 19th century and a Hungarian intellectual named Max Nordau, one of the founders of the Zionist movement at the turn of the century. Nordau believed that Jews were the victims of persecution in part because they were, at the risk of simplification, wimpy. Nordau espoused a theory called Muskeljudentum, or "Muscular Judaism."

Franklin Foer, in his book "How Soccer Explains the World," described Nordau's dogma:

Nordau argued that victims of anti-Semitism suffered from their own disease, a condition he called Judendot, or Jewish distress. Life in the ghetto had afflicted the Jews with effeminacy and nervousness ... To beat back anti-Semitism and eradicate Judendot, Jews didn't merely need to reinvent their body politic. They needed to reinvent their bodies. He prescribed Muskeljudentum as a cure for this malady. He wrote, "We want to restore to the flabby Jewish body its lost tone, to make it vigorous and strong, nimble and powerful." Jews, he urged in articles and letters, should invest in creating gymnasia and athletic fields, because sport "will straighten us in body and character."

Now, how does this relate to Omri Casspi?

Nordau's credo became part of the fabric of 20th Century Zionist ideology. The juggernaut we know as Maccabi Tel Aviv is a product of this movement, born in 1906 as the Rishon LeZion Club in Jaffa, Israel. Initially, gymnastics was the focus of the club, but basketball was introduced in the 1930s, a full decade before the founding of the state of Israel. The nation got its first real basketball league in 1954 and, sure enough, Maccabi Tel Aviv was the first champion. About 50 years later, and nearly a full century after the formation of the first organized athletic club in Israel, Casspi suited up for Maccabi Tel Aviv at the age of 17.

Nordau might be heralded as a hero of Zionism, but his "Muscular Jew" doctrine was a little too close to the European anti-Semitic critique of the modern Jew for my taste. What Nordau essentially put forward was the idea that Jewish men, while learned professionals, smart with money and bookish, are traditionally lousy at the more primal duties of manhood -- things like defending their tribe against aggressors, sports and manual tasks.

By virtue of mandatory conscription, fighting wars and toiling the land for more than 60 years, Israeli Jews (and certainly Omri Casspi) have largely fulfilled Nordau's vision of the muscular Jew and have escaped this rap. For American Jews who have flocked to NBA arenas to get an up-close look at Casspi, the narrative is a little bit different. Many American Jews -- who are more like their European forebearers than their Israeli counterparts in their general way of life -- still internalize some of this Judendot. Their attachment to Israel is a largely tribal allegiance, but there's an element of wonder there too. One of the funnier snippets of Philip Roth's "Portnoy's Complaint" is American Jew Alexander Portnoy's arriving in Israel toward the end of the novel, in absolute awe of the virile Israelis:

And that's the phrase that does me in as we touch down upon Eretz Yisroel [the land of Israel]: to watch the men. I love those men! I want to grow up to be one of those men!

There's a little bit of Alexander Portnoy in the American Jewish men who can't wait to watch this Israeli man fly around the court, shoot 3s, harass ball-handlers and run the break. Yes, some of that fascination is a simple expression of nationalism, but Casspi personifies something deeper for American Jews. The fact that he's not a slight, cerebral point guard but a rangy, explosive -- sometimes even careless -- young swingman makes him all the more appealing.

Casspi is just like everyone else out there ... which makes him special.