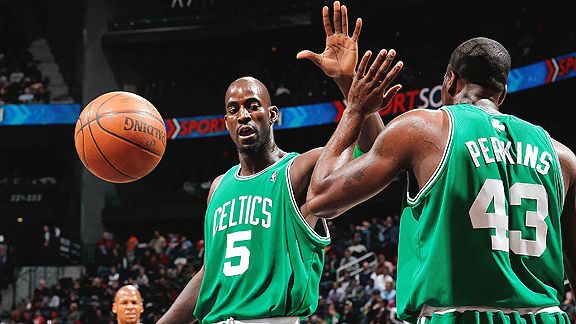 Almost every way I tried to write the headline of this post, I could imagine it becoming a punchline on Deadspin.

And you know what? Let them laugh.

Players patting each other on the butt may be funny. But what's not funny is winning games, and the evidence suggests that teammates who touch each other liberally on the court -- high-fives, fist-bumps, hugs, pats and the like -- tend to do that better than players who don't.

Michael W. Kraus led a research team that coded every bump, hug and high five in a single game played by each team in the National Basketball Association early last season.

In a paper due out this year in the journal Emotion, Mr. Kraus and his co-authors, Cassy Huang and Dr. Keltner, report that with a few exceptions, good teams tended to be touchier than bad ones. The most touch-bonded teams were the Boston Celtics and the Los Angeles Lakers, currently two of the league’s top teams; at the bottom were the mediocre Sacramento Kings and Charlotte Bobcats.

The same was true, more or less, for players. The touchiest player was Kevin Garnett, the Celtics’ star big man, followed by star forwards Chris Bosh of the Toronto Raptors and Carlos Boozer of the Utah Jazz. “Within 600 milliseconds of shooting a free throw, Garnett has reached out and touched four guys,” Dr. Keltner said.

To correct for the possibility that the better teams touch more often simply because they are winning, the researchers rated performance based not on points or victories but on a sophisticated measure of how efficiently players and teams managed the ball -- their ratio of assists to giveaways, for example. And even after the high expectations surrounding the more talented teams were taken into account, the correlation persisted. Players who made contact with teammates most consistently and longest tended to rate highest on measures of performance, and the teams with those players seemed to get the most out of their talent.

It's a dynamic that I feel I see playing out in many parts of society. Some people are apparently scared to touch others. Scared of seeming inappropriate. Scared of being uncool. In same-gender settings like the NBA, maybe scared of appearing to be gay. (The exact thing that gives the headline of this post comedy value in some circles.)

But guess what! Being timid is no way to lead. NBA players face a lot of challenges. Intense defenses. Injuries. Grueling schedules. The playoffs. Younger players gunning for their jobs. Careers that could end with the twist of a knee. Pressures off the court to make this much money or support this many people.

Some dude mocking you for hugging a teammate? Forget him. It's just small potatoes. You just can't get hung up on that. Life's too short. It's extremely liberating and powerful to just entirely skip worrying about that kind of eighth-grade insult.

The researchers say they have not yet been able to prove any kind of cause-and-effect -- does the hugging and touching cause the wins?

It's a powerful form of communication that may do a lot to uplift and inspire teammates.

There are many great examples of this, including LeBron James, who clearly lives in the land of 10,000 physical greetings. TrueHoop reader Christopher, who first made me aware of this study, remembers another all-timer: "Think of Magic Johnson's first pro game. Kareem hits the game winner, and the irrepressible rookie won't stop hugging him. ... Kareem's entire shell started to crack a bit that day, but more importantly the nation started to see Magic's HUGE spirit and love of the game."

As a supportive teammate, one of my favorite players has always been Tim Duncan. He's always putting an arm around teammates' shoulders and the like. I once asked him about an episode at Wake Forest. Duncan's teammate Randolph Childress was feeling down. Coach Dave Odom was talking to Childress and Duncan. Childress stared at the floor. As they both listened to Odom, Duncan reached out a hand and lifted Childress' chin, steering Childress' face towards his coach's.

Not just anyone can do that. It's rude and bold, done poorly. But Duncan is exploding with love and support for his teammates. It was intended, Duncan insisted to me later, not to correct Childress for disrespecting the coach in some way (he couldn't even imagine that anyone would think that) but to uplift Childress. To inspire him. To increase his self-confidence. It's not hard for me to believe having a player behaving like that could make a team perform better, over time, by keeping everyone as motivated and connected as could be.