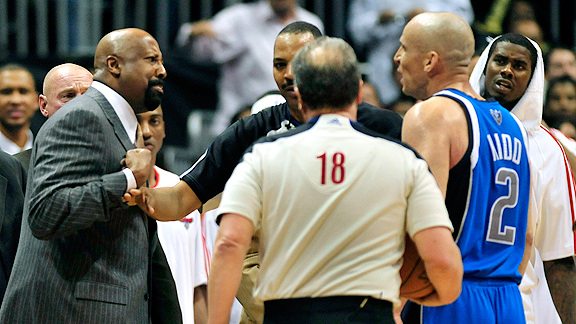 Mike Woodson took a charge from Jason Kidd that ended up costing Atlanta.

ATLANTA -- Jason Kidd may be an old dog, but he still has some new tricks up his sleeve.

With 1:36 left in regulation in the Mavs’ 111-103 overtime win over the Hawks, Kidd made a move he said he’d never tried at any level. It was the veteran move to end all veteran moves -- a player drawing contact from an opposing coach.

“That play just presented itself,” said Kidd. “It’s just something that’s reaction and understanding what the team needs.”

Atlanta led 97-95 at the time as Kidd dribbled down the left sideline and saw Hawks coach Mike Woodson a full step into the court directing his players where to be on defense. Woodson didn’t see Kidd barreling toward him, but Kidd knew exactly how to take advantage.

The 36-year-old vet dribbled even further left than normal, straight toward Woodson, and made sure he drew contact. Woodson leaped away at the last minute, but he’s been retired for 20 years now and his instincts aren’t quite as sharp as when he was starring for the Kansas City Kings. The result? Contact between Kidd’s extended forearm and Woodson’s chest, and an automatic technical foul on Atlanta. Dirk Nowitzki’s free throw gave Dallas a key point that cut the Hawks’ lead in half -- one that proved crucial since the game eventually went to overtime.

“[The official] said I was on the floor,” said Woodson. “I tried to move back and I was moving back and [Kidd] reached over the line and grabbed me.”

As near as anyone can tell, this was one of the few instances of such a play ever happening -- one coming when Milwaukee coach Del Harris collided with Denver guard Michael Adams in 1991. That play, however, happened because Harris walked on to the court to protest a call; Adams never intended to cross paths with him. Then Sonics coach Bob Hill "fouled" Rip Hamilton in 2006.

This play, on the other hand, happened because Kidd forced it to happen. Teammate Jason Terry called it the smartest play he’d ever seen.

“I saw him on the court, and we needed to get us a point somehow,” said Kidd. “I made the officials make something happen. He’s not supposed to be on the floor but for some reason it’s a fashion thing for coaches to be out on the floor…I’m surprised it hasn’t happened more.”

Kidd and Woodson shared some words immediately afterward, but it wasn’t bad blood as much as immediate lobbying to the refs for what to call.

“He was talking like I tried to take him out,” said Kidd. “I was saying you can’t be on the floor, you’re a coach, you’ve got no uniform on.”

As both Carlisle and Mavs owner Mark Cuban pointed out afteward, it should have been a technical foul on Woodson regardless since he was well out of the coaching box. But it likely would have slid had Kidd not forced the officials to make the call -- Woodson isn’t the first coach to wander on the court while giving defensive instructions.

“Sometimes you take a step or two [out],” said Mavs coach Rick Carlisle. “It’s very rare to see a coach out as far as he was, but it does happen.”

Kidd’s veteran move was one of two rare plays he contributed to in the fourth to help rally Dallas from a 13-point deficit in the last five and a half minutes of regulation. The other was a five-point play with 4:50 to go that cut Atlanta’s lead from 11 to six. First, Dallas got a foul and basket from Brendan Haywood. When he missed the subsequent free throw, Kidd grabbed the offensive rebound and quickly pitched it out to an open Jason Terry, who sank a 3.

That sequence was part of a lightning fast 12-0 Dallas run that took just 1:39. Kidd’s fingerprints were all over it -- after the five-point play, he stole a pass to Joe Johnson and threw ahead to J.J. Barea for a run-out lay-up, then found Dirk Nowitzki for a wide-open 3 on the next trip.

Kidd, who finished with 19 points, 17 assists and 16 rebounds in what Carlisle termed “an all-time great performance,” then teamed with Nowitzki (37 points) to finish off the Hawks in OT. Kidd posted Mike Bibby with the Mavs up by four and 1:06 left and, when Atlanta’s Josh Smith inexplicably doubled him, kicked to an open Nowitzki for a 3-pointer that all but sealed it.

Nonetheless, it was a play Kidd made that did nothing for his own stat line that everyone in both locker rooms talked about afterward.