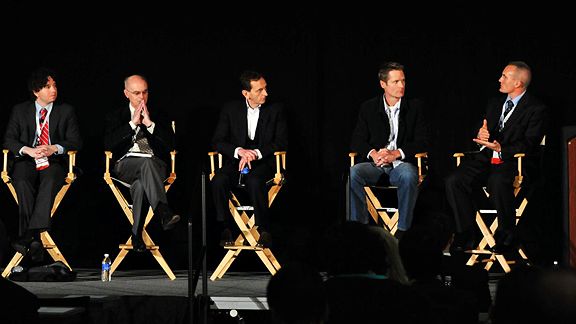 I don't come to this panel without prejudice. My general view of performance enhancing drugs tends to run counter to most fans and sports journalists. I don't explicitly support PEDs in sports, but I do see them as neither good nor bad. They exist in every realm of modern life. Kids are prescribed adderall; more and more adults are taking neuroenhancers to give them an edge. Athletes are looking for every edge to give them a competitive advantage -- and PEDs are just one aspect of that. (You think LASIK hasn't had a beneficial effect on certain athletes? Is that natural? Doesn't it distort historical records?)

We can debate the moral and ethical issues, but efforts to enhance human potential are a part of the evolutionary process. Always have been, always will be. The discussion about PEDs will probably seem quaint in a generation, as we improve our capacity to manipulate DNA or enhance memory (wouldn't that help a young quarterback or point guard charged with running a complicated offense?). What will we do with a young athlete with increased oxygen content in his blood because his parents decided to make that adjustment in the womb while they were also ensuring that their child wouldn't suffer from genetic diseases? Bar him from competitive sports?

These are some of the questions I have headed into this session at The MIT Sloan Sports Analytics Conference this morning. The panel, moderated by Gary Belsky, the editor-in-chief of ESPN the Magazine, are:

Belsky starts by asking, "Where do you draw the line where enhancement is acceptable?" Blair begins by taking about technology is producing better equipment, better technology and specifically discusses how the swimsuit used by athletes in Beijing allowed swimmers to shatter all kinds of records. The organizing body for international swimmers has decided that they're prohibiting some of these suits. "They're taking a big step backwards," Blair says. He notes that swimming was never more popular than it was last summer and that the record-breaking had a lot to do with the public's embrace of the sport. He also recounts a conversation he had with his 10-year-old daughter who asked, "Does everyone get the same suit? Then it's fair."

Kerr says that he knew of one case in basketball where an athlete did steroids in basketball, a player who took them to bulk up for the draft. Kerr says he took Vioxx to help with his deteriorating knees when he was active as a player. "I think Vioxx is a performance-enhancing drug," Kerr says. It made him feel better and play through the injuries. Simply put, it enhanced his performance.

Murray, the bioethicist, feels that the three factors we need to consider in this conversation are safety, fairness, meaning. "You have to draw a line in sports," says Murray. Every sport needs boundaries and rules -- the dimensions of the field of play, equipment and what players can and cannot bring to the game -- including PEDs.

• The Next Generation of Sports Management and Ownership.

• The Dean of quant.

Verstegen says we need to keep in mind that the demands that are placed on athletes (he reluctantly refers to them as entertainers) prompt many of them to ask what they need to do to sustain themselves, and what kind of support they have in terms of physical remedies. He reminds the audience that PEDs are often about recovery from this regimen -- not specifically performance enhancement.

Kerr talks about Tom Gugliotta, who went to GNC years ago and began taking a lot of legal substances. One night after a game, he got on the bus in Portland and collapsed. Portland trainers helped him. They called the Suns' staff to find out what he was taking. The fact that the Suns knew, Kerr says, might have saved Gugliotta's life. The lesson is that training staffs need to know exactly what their players are taking.

McCann addresses the societal questions. He says society has an obligation to preserve safety. This is a natural regulating function of government. They do it with smoking, after all. He addresses whether there's a moral distinction between safe steroids and LASIK. He correctly states that we'll get to the point where we have safe steroids (we're already there), what will we do then? Murray doesn't think there will ever be steroids that have no effect. He also worries about the competitive question: Steroids as an arms race, whereby players who aren't taking them -- and don't want to -- might be effectively unable to compete with those who are.

Belsky asks a very good question: How should we think about "fairness" when Yao Ming is naturally endowed with height? Is there really such a thing as a level playing field? Murray responds that disparities in natural talents are far different than artificial disparities. "Sports is about maximizing our potential."

Belsky presents an interesting hypothetical: Michael Jordan and Candace Parker deliberately decide to breed a child. Do we root for that child? Blair answers that this happened in cycling between two champions who are husband and wife. The kid is now being coached by Lance Armstrong!

Belsky tells the panelist, "I have a dead man's ligament in my knee," by virtue of surgery on his ACL. He brings up the case of Oscar Pistorius, who has an artificial limb and a hypothetical 14-year-old who has had Tommy John surgery prophylactically. Blair says the leagues might have to step in eventually. McCann wonders if players unions might step in and prohibit players with artificial or enhanced limbs. Kerr says the medical advancements like transplants that propel an athlete further will present a murkier picture. McCann says that teams are interested in what sort of genetic red flags a player might have. He brings up the case of the Bulls and Eddy Curry. The team wanted him to take a DNA test to learn more about his congenital heart condition.

Belsky asks if it wouldn't be a good idea if all the sports banded together to create an enhancement board where players could go and get regulated and safe PEDs and make informed decisions under supervision, maybe require them to take courses in safety.

Kerr says that the NBA does a good job of enforcing PEDs and that its problem is regulating recreational drugs, a comment that draws a laugh. Players get a letter from the league about six weeks before the season starts telling them, "You're going to get tested for drugs, including marijuana, on October 1. Remember that the drug stays in your system for 30 days." Kerr jokes that players would take full advantage of those final two weeks or so. He also says the union makes a concerted effort to educate players. He also repeats the meme that PEDs wouldn't help an NBA athlete -- a claim that doesn't pass the smell test. We were told "speed guys" and pitchers and baseball wouldn't benefit, but lo and behold, dozens of these kinds of players were found to be taking drugs. Verstegen suggests that use of PEDs in basketball is probably more common than we're led to believe. McCann responds the panel that the NBA tests for steroids and that the government has busted many illegal steroids dealers and no NBA players have been found on their clients lists.

Murray worries that the drugs we'll see in the NBA won't be traditional steroids, but the kinds of biosynthetic hormones that exist in cycling. These are PEDs that help endurance more that strength.

Kerr makes an interesting distinction between the public's willingness to tolerate PEDs in the hallowed game of baseball ("your grandfather's sports") and football. "Football is a barbaric sport," Kerr says. "The public is like, 'whatever you have to do, go ahead.'"

Belsky: "My grandfather's sport was running from Cossacks."

European history might have been played out differently if there were PED dealers in the shtetl!