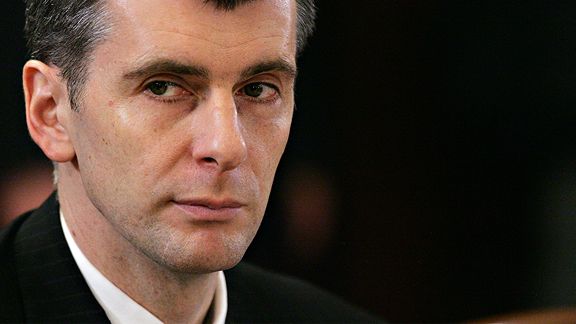 Mikhail Prokhorov is going to be a whole new kind of owner.

A crisis-averting home win against the Spurs is nice and all, but it's nothing in the big picture compared to what's coming for the Northeast's saddest franchise.

The Nets' owner-to-be has finally started speaking in depth to English-language media. And while there were tiny missteps that speak to his newness in NBA circles (for instance, saying he hopes his team will win "the NBA cup," saying he's the only NBA owner who can dunk -- paging Michael Jordan -- and calling this year's draft as good as the 2003 LeBron James draft) it's hard to imagine the results could be more promising.

Mikhail Prokhorov has the makings of a special kind of NBA owner.

He's famous for the billions he made after buying a metals company from the government at an insider's price, but in business, he's hardly a one-trick pony -- and even in that transaction he deserves credit for radically overhauling the nature of the business to make it far more profitable than before he bought it. He even reportedly took to the factory floor himself, showing up as a worker as part of convinving hunger-striking union leaders to go along with the reforms and layoffs that prepared Norilsk Nickel for the global capitalist market.

He has displayed extraordinary business competence ever since he started a stonewashed jeans business in the early days of Russian capitalism (and before that, the former Soviet soldier was so effective a leader, organizing students at his night job unloading railway cars, that he says he made more than many doctors). Further business victories have come from currency exchange and banking. Watch his extended interview with Bloomberg TV. It's a little businessy, for sure, and it's more than a half-hour. But after watching, you'll believe me when I tell you he's blatantly a very strategic thinker who works hard, has a talent for management and delegation, and gets consistently good results.

And, even better, he looks like an owner who will delegate meaningful authority. He talks authoritatively about the long-term strategy of his businesses, which drives his investments. But again and again he also makes clear that the day-to-day operations are the duties of the competent people he hires. (At one point, for instance, he says he has no sense of his own household expenses ... but he has people he entrusts to run it well.) If you're a GM with a vision, that's music to your ears.

His strategic leadership alone would likely improve the Nets' performance in the near term. But remember, this is the NBA team that has proved winning is not always the perfect medicine. This is the team that made it all the way to the NBA Finals, twice, and still somehow never became cool and never became the place to be. That's why it matters that, in addition to business competence, Prokhorov brings the potential to be a bit flashy in a way that could go a long way to overhauling the team's dreary image.

The next decade, for Nets fans, is going to be so different from the last one.

The most prominent interview he has done in the United States was on "60 Minutes." It was shorter and far less insightful than the Bloomberg interview, and focused heavily on how rich he is: The $45 million yacht he can't go on because he gets seasick! The massive house! The attractive women crowded around him in the nightclub!

It could have doubled as a segment of "Lifestyles of the Rich and Famous." Prokhorov is generally taciturn, but he has a silly side to him -- a way of gently cocking one eyebrow and saying something outlandish. It's smug, to be sure. Combined with all the jet skis, the bizarre way he wants everyone to see all of his possessions and the young women swirling around, and absent all the insight into his hard work and extraordinary competence as a business leader, that story could make you see him as a guy who woke up on third base and thought he had hit a triple.

But that image isn't all bad for the Nets, even this cartoonish billionaire-at-play character could serve the team's tactical need to look good to free agents. If I were the Nets, I'd rush DVDs of that segment to every good NBA player with a chance of being on the market over the next two years. And here's a story about why: Nearly a decade ago I had a very long conversation with Scottie Pippen -- then a Blazer. One thing about it that amazed was how genuinely reverential he was in talking about Portland owner Paul Allen. There's nothing like having a few millions and some sense of business to make you appreciate the people with the billions. In short, Pippen dreamed of cruising through life like Allen does. The big boats, the private jets, the ridiculous houses, the never-ending travel ... it all made a lot of sense to Pippen, who couldn't easily afford all that (and would later endure profound financial trouble, after sinking big dollars into, among other things, a boat and a plane).

The Prokhorov portrayed in that "60 Minutes" story is someone plenty of NBA players would love to get to know better.

And that's where Prokhorov's most famous misstep could even serve him. Besides buying the Nets, the thing he may be best known for is getting arrested at the French ski resort of Courchevel in early 2007. He was released without charges, but the police who nabbed him told him they did so with the belief the eight attractive young women traveling with his party were prostitutes.

Prokhorov says that "of course" the women were not prostitutes. At the time, the French authorities who locked him up told the press the women may have been paid only with gifts. Somewhere in there, the line between girlfriend and call girl gets a little blurry. But in recent interviews, Prokhorov also does nothing whatsoever to distance himself from the idea of hanging around with tons of young women.

Would he bring those same women to Courchevel again? "Why not?" he replies, in the Bloomberg interview.

Indeed, Prokhorov took Steve Kroft and his "60 Minutes" cameras to his private room at a Moscow nightclub, which was well-stocked with young women who were enthusiastic to see the billionaire. Similarly, Bloomberg's Stephanie Baker writes:

Prokhorov also has a fondness for Russian models. Late one Friday night in December, he hits Soho Rooms, a Moscow nightclub where he takes over a balcony section with male friends and a random collection of long-haired, slim women -- some models, some students -- wearing high heels and dressed mostly in black.

He buys drinks for the group while sticking to mineral water himself. He jokes with some of the women, his hand lightly resting on their waists, before sitting down to watch a bevy of women dancing in white corsets, panties and Cossack-style white fur hats.

"That’s where the energy is," he says, pointing at the women.

Anyone who reads TrueHoop regularly knows that I'm more than happy to write another column about what a shame it is so many in sports see women primarily as sex objects. But I'm also pragmatic enough to see how this will almost certainly play out in favor of Nets basketball. In short: It's not outlandish to consider that NBA players are going to like being around this guy.

What matters most about Prokhorov are his credentials in leadership, strategy and investment. But beyond that, on the image front, the Nets are, for the first time ever, well positioned for the long haul. Prokhorov's party-centric personality, billions and passion for hoops are one pillar. Jay-Z and the credibility endorsement he brings are another. Brooklyn -- which is populous, energetic, wealthy and starved for borough-wide identity ever since the Dodgers left -- is the third leg of the platform.

In short, these aren't going to be the same ol' Nets for long.

And one last point: There is a lot of baggage that comes with being one of the richest men in Russia circa 2010, where there is never-ending talk of contract killings, shady government deals, mobsters and the like. Prokhorov insists he's neither violent nor a politically connected "oligarch." But there's almost an accepted kind of bias there, where if you're a Russian businessman you're under a cloud of suspicion until proven innocent.

I'm guilty of it myself. Aware of what has happened to journalists who ask hard questions about powerful people in Russia, and expecting to be a journalist asking hard questions about Prokhorov, I confess that a while ago I asked an NBA executive if he knew enough about the Nets' incoming owner to assure me I wouldn't regret writing frankly about him. He said that he didn't think I had anything to worry about.

Commissioner David Stern was on camera for both Bloomberg and CBS, and insisted that extensive investigations revealed there was nothing to worry about with Prokhorov. Forgive me for not taking his word about the investigation, for a number of reasons, including this cheap shot: How could the NBA possibly sort out the good guys and bad guys in the Russian mob when they couldn't even sort out the degenerate gambler on their referee staff?

Similarly, "60 Minutes" asserted, oddly without attribution, that Prokhorov made it to the top of the early days of Russian capitalism "with no blood on his hands."

That's a lot of conclusion without a lot of evidence.

But seeing Prokhorov in the media over the last few days -- forget Stern's investigators, or 60 Minute's research -- he's the best evidence there could be that he's above board. Watching him speak, it's easy to understand how a guy like this would have become a billionaire on his own merits. He knows what he's doing. Nets fans, free agents, journalists and all kinds of people will be eager to associate with him. Perhaps the only bad news for NBA fans in Brooklyn is that Prokhorov isn't going to be around all that much, saying he'll be in New York City for only about ten games a year.

Mikhail Prokhorov is going to give Mark Cuban a run for his money as the NBA's most innovative and exciting owner, and Nets fans are going to reap the rewards for many years to come.