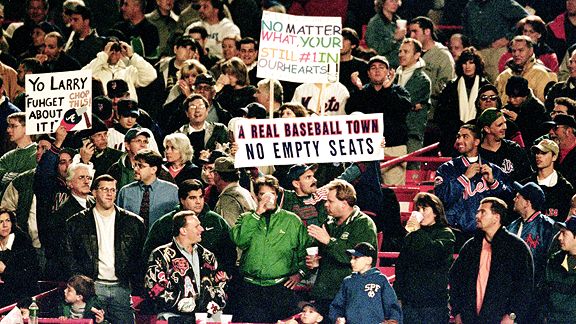 Is Atlanta a "real sports town" like New York?

I practically grew up at the Omni. I had a more familiar relationship with our chain-smoking usher decked out in her red sateen jacket with the octogonal patch sewn on the sleeve than I did with the administrators who roamed the halls of my elementary school.

At the time I started attending Hawks games, the population of metro Atlanta was around 2.3 million people, qualifying it as a medium-sized market still in its relative infancy as a major league city -- the Falcons were the first to arrive in Atlanta in 1965. When I attended my first Hawks game in 1981, the team had been in Atlanta for only 13 years. At age eight that meant nothing to me, but for my father, who was born and raised a couple of miles from the Omni, the Hawks were still a novelty. For most of his lifetime, southern cities simply weren't candidates for big-league sports teams for reasons ranging from economics to history. It's not a coincidence that major league teams arrived just after the passage of the Civil Rights Act of 1964.

Those teams have now been in the city for more than 40 years, but Atlanta still suffers from the reputation of being a horrible sports town. The city's pro sports teams -- most notably the Braves -- have trouble selling out postseason games. Even though the Hawks have climbed into the ranks of the NBA's elite and feature an electrifying roster of athletes, they still rank in the bottom half of the league this season in attendance -- behind the Wizards and just a smidgen ahead of the Clippers. The question of support is all the more riddling because Atlanta has become a magnet for multi-national corporations over the past 25 years.

In today's Atlanta Journal-Constitution, Michael Cunningham reports that the Hawks are frustrated that, many nights, supporters of the opposing team are more vocal at Philips Arena than Hawks partisans:

The marquee teams and stars who’ve visited Philips Arena this season have been too warmly received for Woodson’s tastes.

“It shouldn’t be that way,” Woodson said. “There [are] enough people in this city to support the Hawks. I think we are a fun team to watch. We’ve grown definitely over the years, from the time we started to where we are today.

“Sure, I’d like to see more people in their seats and rooting for our guys.”

Instead, the Hawks have seen fans root for opponents in their house.

... Now Woodson would like for Hawks fans to do their part to make Philips unwelcoming for visiting teams. That’s how it was for the Pistons when Woodson was an assistant coach there prior to taking over the Hawks.

“When you came up in The Palace, you were in ‘Detroitland,’” Woodson said. “They [fans] made the difference in a lot of ballgames that we won. And it needs to be like that here.

Pop-sociologists have all sorts of theories for the general apathy in Atlanta. They cite the temperate climate, which keeps residents outdoors for much of the year. They point out that Atlanta has produced only one championship in the collective 152 seasons that the four major sports have been played in the city. In recent decades, the traffic on the ribbons of highways that snake through the region has become hellacious and a commute downtown at rush hour is an awful experience.

Each of these factors plays a part, but I like Jamal Crawford's theory a little better:

Hawks guard Jamal Crawford makes the case that support for visiting teams is due to the significant number of transplants in Atlanta. Crawford was on the other end of that equation when he played for the Knicks, who were supported by relocated New Yorkers in several cities.

Since I attended my first Hawks game in 1981, that 2.3 million has grown to nearly 6 million people who live in the region. Needless to say, native Atlantans aren't procreating at a frenetic rate. More than a third of the people who moved to the city between 2000 and 2004 were from out-of-state. That domestic migration is a huge factor in the region's growth. Overall since 2000, nearly 50,000 more US-born people from somewhere else in the country are arriving in metro Atlanta each year than leaving. Global migration represents a big part of the population boom, as well -- 13.4 percent of metro Atlanta's population is foreign-born.

There's a logical counter-argument to all of this: More people should mean more fans, irrespective of where they were born, right?

If you've ever spent time in an older city outside the Sun Belt, you know how central sports teams are to the natives. Bostonians, New Yorkers and Chicagoans have passed down their loyalties from generation to generation. My late grandfather was born at Georgia Baptist hospital in 1916. He was a native Atlantan through and through. He loved his city and its institutions -- but none of those institutions were sports teams. By the time the Hawks arrived in Atlanta, my grandfather was in his early-50s. Few rabid sport fans cultivate visceral attachments to expansion teams as 50-something empty nesters. The serious middle-aged fans I know grew up listening to Red Barber, Jack Brickhouse and Marty Glickman. Those voices were the tour guides to young fandom. My grandfather didn't have that, and it wasn't something he could pass on to me.

By and large, I found the Hawks at school, where a band of nine year olds rallied around Dominique Wilkins, who was arguably Atlanta's second larger-than-life athlete behind Hank Aaron (Steve Bartkowski and even Dale Murphy didn't carry the same kind of charisma). Those of us who were native Atlantans (only about half the class, even in the mid-80s) weren't raised on tales of Earl the Pearl or Bill Russell. The only sports anecdotes my father relayed to me were stories of watching the International League's Atlanta Crackers at Ponce de Leon Park.

So the dynamics in Atlanta go further than even transplants. Natives themselves have a shallower pool from which to draw. Does that excuse Atlanta's lackluster fan support, particular when you consider the Portland Trail Blazers entered the NBA two seasons after the Hawks moved to Atlanta? Does a city need to apologize for its collective apathy toward its sports teams? These franchises aren't institutions like the school board or law enforcement agencies, or even non-profits like museums or the opera -- entities that require civic support to survive. The Atlanta Hawks are an entertainment product whose profits go into the pockets of some very wealthy individuals. Would I like to see my hometown embrace the Hawks the way residents of Salt Lake City and Portland support their teams? Sure. But nowhere else on the commercial landscape do employees bitch about customers not supporting the goods they produce and/or sell. If the foot traffic isn't coming in off the street, then it's up to management to figure out smarter ways to entice those potential customers. The Minnesota Timberwolves are figuring that out. So are the Charlotte Bobcats.

I don't mean to criticize Mike Woodson or any other Hawk who'd prefer that Josh Smith get more applause at Philips Arena tonight than Kobe Bryant. That's a reasonable wish, but it doesn't change the fact that, for a bevy of reasons, the organization is up against some tough conditions. Business is business -- particularly in an exploding market where there are more ways than ever to spend your money.