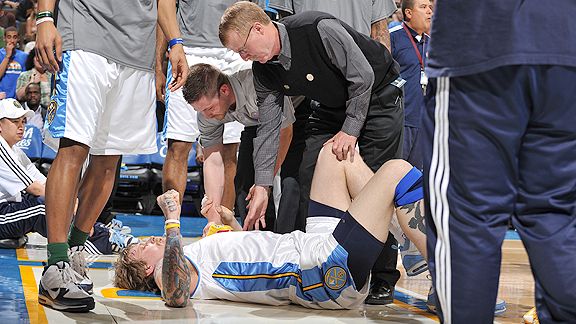 Before briefly masquerading as a cough drop, the mysterious item posed for this photo.

As has already been discussed in far too fine a detail on TrueHoop today, something mysterious, small, round and gold fell into Chris Andersen's mouth last night as the trainers gathered around him last night. You could see the whole thing on TV and in this hilarious still image.

So what was it? In the photo above, that's head athletic trainer Jim Gillen wearing the vest. On TV, his arrival at Andersen's side seems to time up nicely with the falling gold. Every conceivable theory is far-fetched:

It is with mixed emotions -- joy at discovering the truth, sadness at parting with such a fun mystery so quickly -- that I report that Nuggets media relations guy Tim Gelt says the answer was really behind door number two.

"Jim Gillen," he explains, "was wearing an 'NBA Green Week' lapel pin that just happened to fall off when he was tending to Chris."