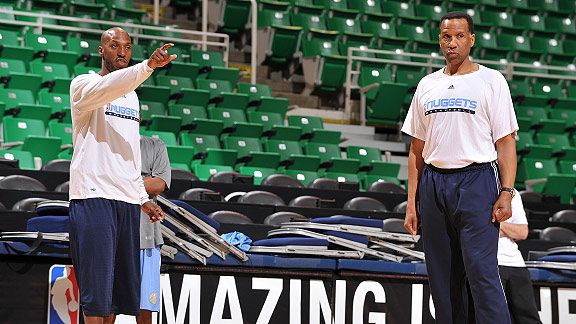 Who decides what the Nuggets do on offense?

DENVER -- The Denver Nuggets have a secret arsenal of nearly unstoppable plays. There's only one hitch headed into Game 5:

Acting head coach Adrian Dantley isn't sure he can get his team to run them.

That's because the Nuggets see themselves as a certain kind of basketball team with an anti-system. Mike D'Antoni has 7-seconds-or-less. Phil Jackson has The Triangle. Jerry Sloan has The Flex. And Dantley has inherited from George Karl what he's referred to more than once as "random basketball."

What does "random basketball" mean? That's Dantley's description of how the Nuggets perceive themselves offensively -- a team that flourishes by pounding you with dominant one-on-one play in the half court and with breakneck transition buckets. Dantley isn't the only one to make that general characterization. When asked about the Nuggets' woeful assist total of 13 following Game 4, Chauncey Billups conceded, "We aren't really a high-assist team. That's not how our offense is made."

It's true that Denver runs a more individualistic half-court offense than Utah does and, as Carmelo Anthony pointed out today, that plan of attack has served them well for several seasons. In fact, Denver isn't exactly struggling offensively in this series. The Nuggets' offensive efficiency of 110.9 points per 100 possessions is an improvement on their regular season efficiency of 108.7. But after walloping the Jazz in Game 1 of the series, the Nuggets have posted a more modest efficiency rating of 104.7.

A stubborn devotion to "random basketball" is one of the reasons Denver's offense has fallen off since Game 1, and there's something obtuse about the Nuggets' unwillingness to construct coherent possessions in the half court against Utah. When the Nuggets choose to run deliberate sets, they're shredding the Jazz -- particularly on the pick-and-roll.

To illustrate, let's go back to Game 2. The Nuggets are coming off an emphatic 126-113 win. Fesenko has taken over as Utah's starting center after Mehmet Okur was lost for the season with a torn Achilles tendon in Game 1. The vibe is that the Jazz are done. Denver comes out of the opening jump with three straight Carmelo Anthony-Nene pick-and-rolls, and all of them produce points:

According to Synergy Sports, the Nuggets have choreographed a pick-and-roll -- then hit the roll man -- 17 times in this series. The results:

Those 17 possessions in sequence is an impressive reel of video. Ball-handlers/passers include Billups, Anthony, Ty Lawson and J.R. Smith. All the Nuggets bigs are represented among the roll men. Whatever the scenario, the Nuggets score on 15 of the 17 opportunities, which leaves you with one question:

Why are the Nuggets running this action only four times per game?

One explanation might be that Jazz defenders are effectively trapping the ball-handler, making a pass through the double-team treacherous. But that's clearly not the Jazz's strategy when defending the pick-and-roll, even when Anthony is the ball-handler -- which brings us to another interesting bit of data:

Anthony has been the ball-handler on nine pick-and-roll sets. On those nine possessions, he's 7-for-7 from the field, with two turnovers.

Overall, only four teams this postseason are doing better work off the pick-and-roll, but with the exception of the Lakers and Utah (the two most orthodox systems in the bracket), no team is running them less frequently than the Nuggets. Instead, Denver is relying on isolations, post-ups and spot-ups, where they're generating ho-hum results -- less than one point per possession.

I asked Dantley about the success Denver had running the pick-and-roll and why the team wasn't deploying them more readily.

"We looked over our offensive stats and we definitely score more on our pick-and-rolls," Dantley said.

Then why doesn't he call for them more often over the course of the game?

"That's the way we play," Dantley said. "We've had more success right now with the pick-and-roll, more than 'random,' but our basketball team is known as a 'random' basketball team."

At some point, doesn't a team have to recognize what works? And whatever the identity of the team might be, shouldn't the team conform to what's working?

"That's what we've told them," Dantley said. "Whether they do it every time, that's a different story. Statistically, we tell them every game, 'Hey, run the pick-and-roll. Run drags. We've had success with that more than "random" basketball.'"

Given that success, will that be the plan Wednesday night in Game 5?

"I'm agreeing with you," Dantley said. "Statistically, we've had success on pick-on-rolls. We've told them that. We want them to do that tomorrow. Hopefully they do it. But, the last five years, we do more 'random' than we do pick-and-roll."

Dantley's comments suggest that there's a serious disconnect between acting head coach and the team's on-court personnel. It's not unusual for a team to fail its coach as a sin of omission. Both Jerry Sloan and Dantley are certain to tell their players to crash the boards tomorrow night, but one of their two teams will do a subpar job. That coach will be disappointed and very possibly angry. But that's much different than a coach laying out a very specific set of strategic imperatives, and the players on the floor not heeding those instructions. If you take Dantley's remarks at face value, he's implying this is what's been happening with the Nuggets, and he has no assurances that dynamic won't continue in Game 5.