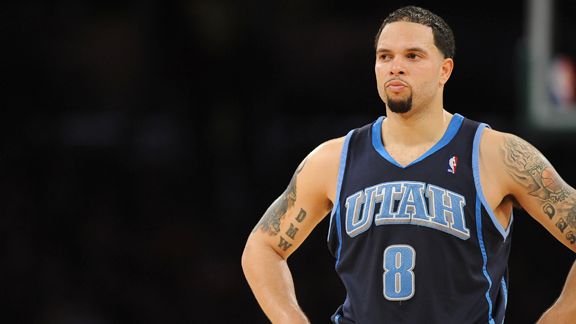 Deron Williams: Too good to be an underdog?

SALT LAKE CITY -- When the Utah Jazz greet the media at their practice facility in Salt Lake City, each player (and the head coach) stakes out a familiar spot in the gym where he addresses the scrum. Andrei Kirilenko, Kyle Korver and Wesley Matthews take questions in the middle of the court. Carlos Boozer fields questions along the far baseline beneath the basket. The peripatetic C.J. Miles roams freely, while Jerry Sloan stands stoically in front of the plastic purple bleachers. Once the camera crews from local affiliates are gathered, there will be a moment of deferential silence as the reporters make sure Sloan is ready, at which point he blurts out, "Whattaya got?"

Where can you find Deron Williams? The Jazz point guard is in the far corner of the gym, slouched on a training table leaning back against the wall. That's his spot, away from the busy flow of the gym. Williams had a reputation of being truculent with the media during his first couple of seasons, but now in his fifth year, he accepts the spotlight with a fairly polite tolerance, though he's still a somewhat reluctant participant. More than anything, he's still -- legs stretched out in front of him, head tilted back, a dozen voice recorders in his face. As he's peppered with questions, Williams barely moves from that position.

On the court, it's an entirely different story. Williams never stops moving. He's not hyperkinetic like Steve Nash or Chris Paul. It's a more orderly velocity, a good kind of reactive. Williams rarely lets the defense dictate where he's going, but he uses every piece of information to make snap decisions with an impressive change of speed. Where are the other nine guys on the floor? What does the system demand of my talents at this instant? Can I counter-program and get to the hole off the dribble?

The answer to each of these questions usually produces a foray into the paint, where the Jazz are getting anything they want against Denver thanks to Williams' orchestration of the offense. Williams is averaging 28.2 points and 11.6 assists in the series with a player efficiency rating (PER) of 28.19. He's the first player in NBA history to have five consecutive 20-point, 10-assist games within a single postseason series. Williams is both statistically and operatively the best player on the floor in this series, which prompts the question:

Despite the absence of Kirilenko and Mehmet Okur and the presence of an undrafted rookie and a project big man in the starting lineup, can a team with a supernova like Williams controlling the action truly be called an underdog?

When Okur went down, conventional wisdom deemed the Jazz a long shot, present company included. Even the Jazz's success in taking a 3-1 games lead headed back to Denver was framed as a triumph of discipline over combustion, the achievement of a cohesive team over a disparate collection of talent. After all, the Nuggets extended the Lakers to six games in a grueling conference finals last season, earning the mantel of the team most capable of dethroning the Lakers if the champs were to falter. Denver features Carmelo Anthony, one of the preeminent shot creators in the game. The Jazz? High I.Q. players, but no competition for the Nuggets' athletes.

Now that we've been living with this series for the better part of two weeks, the matchup has a different quality to it, in large part because of Williams' influence. Anthony has undoubtedly produced over the five games, but Williams has dominated. The execution of the Utah system held in such high regard isn't merely a product of whiteboard magic -- it's a direct result of Williams' leadership and court vision.

Williams doesn't merely ignite an effective transition or choreograph the Jazz's motion offense, he's also become a knockdown shooter from long distance, hitting at a 54.2 percent rate in the series from beyond the arc. He's also Utah's second-best option behind Carlos Boozer in the post, where he can score and wreak havoc with brilliant kickouts. In this series, he's doing stellar work off the ball and on the defensive end. But Williams' defining quality might be, more than any point guard in the league, his unwillingness to waste a possession.

Singling out Williams shouldn't discount the synchronicity carried out by each of the Jazz players in Sloan's offensive scheme, but the old construct of this series as a battle between a system and an individual talent is no longer relevant. The Jazz have their individual performer in Williams. They also have Boozer, the best big man in the series (something that was true before Nene went down with a sprained left knee), and reserve Paul Millsap, whose 24.08 PER ranks him 10th in the postseason among players who have logged more than 15 minutes per game.

Denver notched a much-needed victory at the Pepsi Center on Wednesday night, a feat it accomplished by moving the basketball and running a coherent offense for the first time this postseason. But in reassessing this series headed into Game 6 -- a possible clincher for Utah on its home court -- it's time to bury the idea that the Nuggets have considerably more talent than the Jazz. Denver might have a decisive edge in athleticism (less so now that Nene is out), but Williams' repertoire of skills should give us pause about the long odds originally assigned to Utah after Game 1.

It might spoil the storybook narrative, but we're now learning that Deron Williams is simply too good to be an underdog.